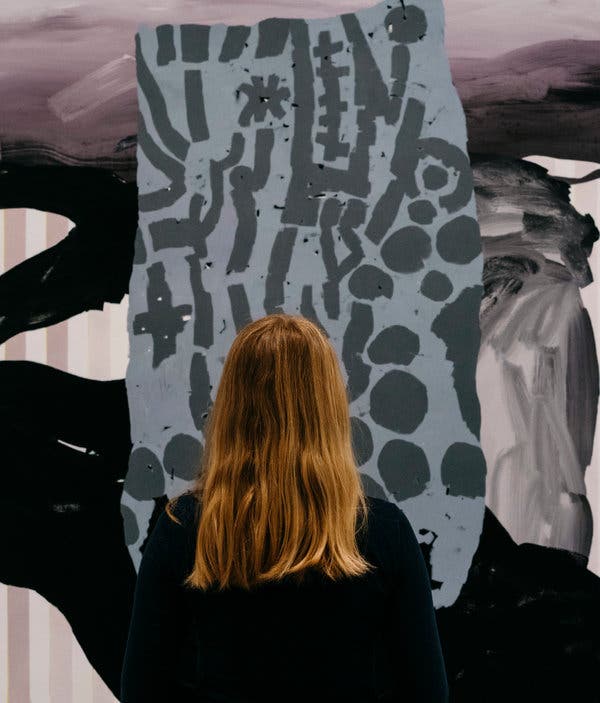 Charline von Heyl's "Slow Tramp," from 2012, in the exhibition "Snake Eyes" at the Hirshhorn Museum in Washington.CreditCreditJustin T. Gellerson for The New York Times

The government shutdown means you can't see Charline von Heyl's first-class retrospective at the Hirshhorn. But consider this substitute: the double life her paintings live online.

Charline von Heyl's "Slow Tramp," from 2012, in the exhibition "Snake Eyes" at the Hirshhorn Museum in Washington.CreditCreditJustin T. Gellerson for The New York Times

WASHINGTON — A very strong exhibition of contemporary painting is up right now in the nation's capital, but I can't tell you to go see it.

Not because Charline von Heyl, the German-born New Yorker with a fearless approach to composition and style, doesn't deserve your attention. I can't recommend it because Ms. von Heyl's paintings are at the Hirshhorn Museum, which — along with nearly 20 other Smithsonian institutions — has been closed since the new year, a casualty of the government shutdown.

"Charline von Heyl: Snake Eyes" opened in November, and I caught it just after Christmas, during the first days of the shutdown, when the stifled Smithsonian was relying on savings to keep the doors open through the holidays. Chances to see it are narrowing: The Hirshhorn is the only American stop for this show, which opened in Hamburg last year, and the museum has no plans to extend its run past the Jan. 27 closing date.

So I've been thinking about what it means not to be able to see Ms. von Heyl's paintings in person. I've been re-examining her art on my phone and on my bookshelf; I've watched walk-throughs of the show on YouTube and scrolled thousands of images visitors have posted to Instagram. What's clear is that, unlike the other major exhibitions you also cannot see in Washington because of the shutdown — the luscious chiaroscuro prints at the National Gallery of Art or the dynamic paintings of Bill Traylor at the American Art Museum — the "Snake Eyes" paintings bleed out of the gallery, into digital space. 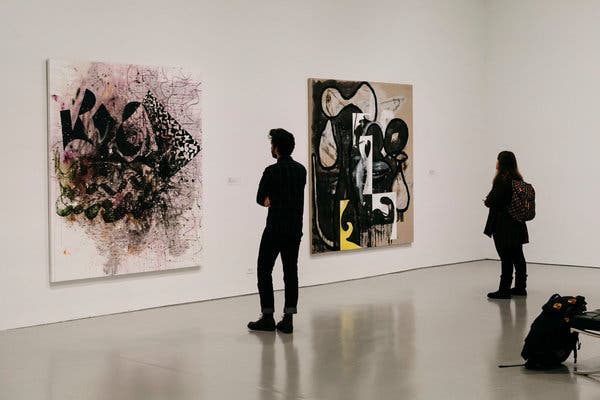 An installation view of Charline von Heyl's "Snake Eyes" exhibition, showing, from left, "Retox" and "Do You Peeve Cato?" The museum is one of several Smithsonian institutions closed because of the government shutdown.CreditJustin T. Gellerson for The New York Times

Looking at a painting and looking at a digital image are hardly two discrete experiences anymore, especially for younger audiences. Being denied the chance to see Ms. von Heyl's paintings in person can, if nothing else, clarify the bifocal strategies art like this demands of us and the ways painting can bridge the gallery and the screen.

Cunning, witty, dandyish at times, proudly kitsch at others, Ms. von Heyl's paintings scamper over any distinction between "pure" abstract and figurative painting. They make use of graphical motifs such as stripes, grids, zigzags and squiggles, and luxuriate in a palette of warm colors: a muffled lavender, a lemon-chiffon yellow and a cherry-blossom pink that all, at times, get mucked up with gray.

Winding S-curves, jagged star bursts, and stammering dots and dashes weave among more identifiable forms, from wine bottles to a woman's face. And almost all of her recent paintings allow different kinds of mark-making — hard and soft, crisp and hazy — to intermesh in ways that trick, and thrill, visitors' screen-conditioned eyes.

In "Dunesday" (2016), for instance, an impetuous curve divides the canvas between hard-edge, black-and-white zigzags at the top, and an inky, gashed field of saffron yellow at the bottom. Four outlines of bowling pins, and a fifth more like a toilet plunger, frame hot-colored patterns that interrupt the saffron half. Yet despite the work's complex composition, all these elements seem to occupy the same flat plane. The same holds true in "Mana Hatta" (2018), which blends rings, squiggles, polka dots and outlined bunny rabbits into what appears to be a figure in profile. The compositional elements bristle against one another, and still they somehow settle into a pancake-flat harmony.

These are far from the methods of Cubist collages, which made a virtue of their elements' disjunction, or of New York School abstraction, which emphasized the gestural production of painterly marks. Instead Ms. von Heyl layers, blurs, masks and copies, soldering together parts into a single, solid image whose genesis is never quite clear. As Mark Godfrey and Andrianna Campbell have written, these painterly techniques are familiar from Photoshop, InDesign and other desktop publishing applications, whose users stack and transform layers to produce a document or a JPG.

That's what makes "Dunesday" and "Mana Hatta" so bewitching in the gallery: the back-and-forth between the means of composition and the resultant image, between the three-dimensional object on the wall and the two-dimensional impression it gives. They're conversant with digital imagery, but they insist on the value of the handmade. (Unlike Albert Oehlen, a key influence for Ms. von Heyl, she does not use computers to make her paintings.) And their layers resolve into images that would flummox earlier generations of abstract painters, but that we, as offspring of the screen, can dive into.

Her paintings are therefore relatively easy to photograph, and this week I have been looking at both printed and digital images of her work, curious as to what disappears and what survives. Most of the visual tricks she employs get blurred, as when she uses masking tape to produce seemingly impossible tangles of lines. Scale drops out, too. Ms. von Heyl's paintings are usually between six and seven feet tall, and in person they fill your eyes and badger your body. Even a pinch-to-zoom gesture on your phone's touch-screen can't capture that physical experience.

Yet online images of Ms. von Heyl's layered, digitally informed paintings aren't fated to be mere shades of the "real thing." The paintings on Instagram have their own lives, parallel to their lives in the gallery. Like Tomma Abts, who also works in intuitive, unplanned ways, Ms. von Heyl makes paintings whose graphic cohesiveness is something of a deception — and that effect is heightened on a phone's OLED display, which turns the image into something close to an icon.

In the gallery, the pleasure of her paintings comes over time, as you look closely, unwind their parts, discover their inner workings. The pleasure online comes as the analog painting gets translated into something new, and disrupts our naïve expectations of accurate transmission.

A similar kind of second, digital appearance arises from the paintings of Laura Owens and Keltie Ferris, whose mark-making is more visibly pastiched, like browser windows on your overloaded desktop. Other digitally conversant painters prefer to jam up the logic of camera phones; these include Cheyney Thompson, R.H. Quaytman and especially Jacqueline Humphries, whose glitchy, iridescent canvases, some featuring stenciled emoticons, turn woozy and reflective when photographed.

None of this is to say that social media offers a substitute experience to seeing these paintings in person. Nor is it to say that surfaces do not matter. It is to say that, for many ambitious artists today, abstract painting springs from the ubiquity of digital imagery as well as from the history of art. These artists acknowledge that we look with compound eyes — and accept that a predigital painterly Eden will not come again.

The art historian David Joselit once called contemporary painting "a broadcast medium." Now everyone with a phone is both transmitter and receiver. We toggle between object-looking and screen-looking at every moment, and the camera app conditions our memories even when our phones stay in our pockets. Paintings like Ms. von Heyl's are especially valuable today, much more than your latest VR flimflam, for the way they solidify the immaterial flows of the image stream, and reveal to us how utterly our screens have changed our eyes and brains. It's good to remember that an old medium can do new things, though I hardly think we needed a governmental crisis to impart the lesson.