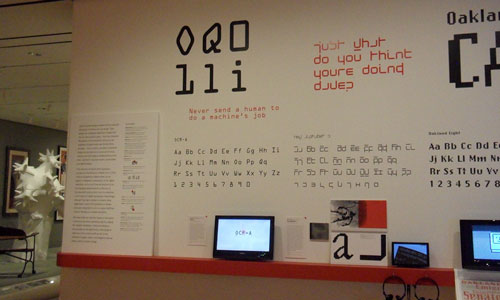 The OCR-A typeface, shown at the Museum of Modern Art. (Eric Fischer/Flickr)

How the challenges of making fonts readable by machines influenced typography

American Type Founders, trust of 23 different type foundries that defined typography in the U.S. for decades, has a lot of fonts to its name, many of them incredibly well known and of high-quality. Franklin Gothic, Century Schoolbook? Both of them credited to ATF typographers. (We'll overlook the fact that the foundry is responsible for Hobo.)

But just one of its fonts has a spot in the Museum of Modern Art's collection, and that font is OCR-A, a typeface created in 1966 to be read for a very specific audience: machines. 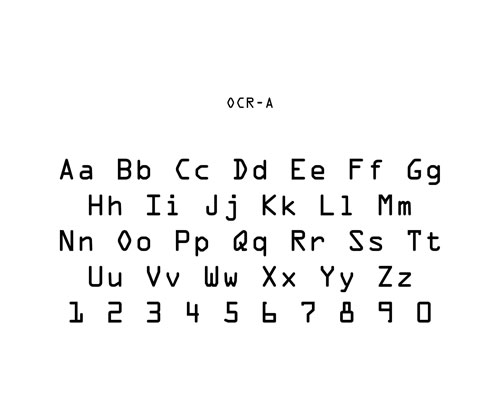 And the machines of the time did not have the ability to differentiate between fonts, making such a font necessary. As the 1999 document Optical Character Recognition: An illustrated guide to the frontier explains:

Many of the typefaces used today are derived from medieval calligraphy, only slightly modified by the limitations of early printing technologies (wood blocks and moveable type). To imitate fine penmanship, vertical strokes are thick compared to horizontal strokes, and NW-SE diagonals are thicker than NE-SW diagonals. Therefore curved strokes may vary in width according to their local orientation. In contrast, typefaces specifically designed for accurate OCR, such as OCR-A and OCR-B fonts, have uniform stroke widths and exaggerated distinctions between similar symbols such as Ο and 0 or 1 and l.

OCR-A wasn't the first font to tackle these machine-scanning issues, but it was a major step forward in that it was a complete alphabet that was readable by both machines and humans. Previously, the most well-known use for such technology involved something you're probably familiar with if you've cashed a check sometime in the last 60 years: Magnetic Ink Character Recognition, or MICR. 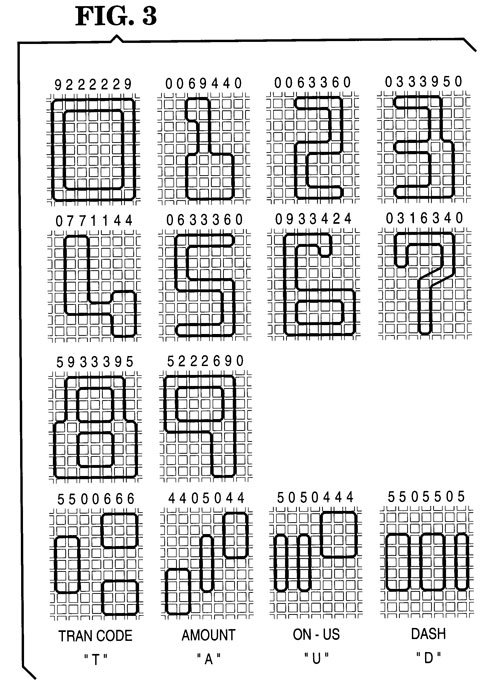 Developed in the 1950s by the banking industry, the fonts—there are two, used exclusively of one another in different countries—are made up of the numbers 0-9 and a few specific codes that are designed to communicate specifically to computers. If you're in North America or the U.K., you've likely seen E-13B, which relies on unique shapes for each individual character. If you're in France, Spain, or South America, you might be more familiar with CMC-7 font, which integrates white dashes into the numbers. The ink is also magnetically charged to ensure scanners look for the numbers. 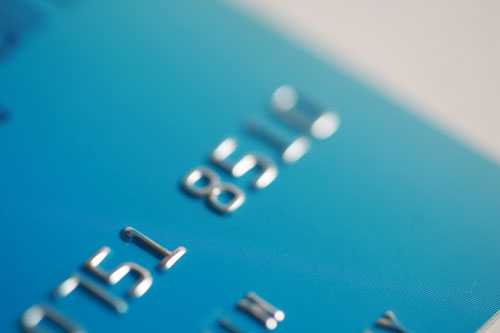 A credit card, with its number displayed in the Farrington B typeface. You mean yours is, too? (Ed Ivanushkin/Flickr)

Another notable font of this nature is Farrington B, a numeric typeface conceived by early OCR developer David H. Shepard that's still in use to this day on credit and debit cards everywhere.

(These fonts, side note, directly inspired other very blocky fonts, such as the one used on the Byte magazine logo , directly leading thick rounded-stroke design to be closely associated with early computing.)

OCR-A, which you might have seen on a piece of junk mail or two over the years, expanded on the basic idea of MICR by creating a character set that could be detected by either a computer or a set of eyes. The problem was, however, that it was a better fit for computers and had a strongly stylized design, which some found not so appealing.

"The result is a font that mixes serif with sans-serif characters, shifts its axes and internal symmetry arbitrarily, and is easy to recognize with its acute angularity," University of Washington associate professor Zach Whalen explained in an essay on the font. "In these ways, OCR-A is an ugly font, but of course that ugliness—a human consideration—makes it less 'invisible' than, say, Helvetica, in a way that links its technical function with its use in graphic design."

That led to a second attempt to take on the problem by Swiss typographer Adrian Frutiger, released in 1968. 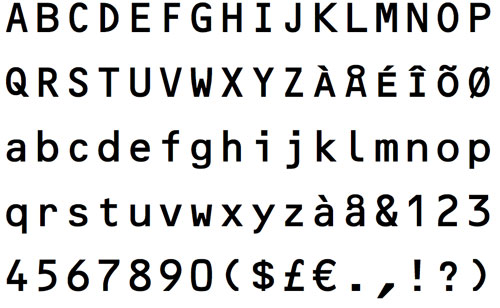 Frutiger was tasked to the problem by the European Computer Manufacturers' Association (ECMA), which felt OCR-A wasn't built for humans' sake. In a piece on the Linotype blog, the late typographer, who died in 2015, recalled that he had somewhat of an advantage as OCR reader technology had improved significantly, and was able to pick up finer details. The result is that OCR-B looks far closer in design to a standard European font than OCR-A's more stylized look ever did.

Not that it was easy—Frutiger notes that, for example, it was a challenge to ensure the "8" and "B" characters were read as unique characters.

The fruit of Frutiger's work is what it was eventually picked up as a global standard by the International Standards Organization (ISO), while OCR-A had to settle for the American National Standards Institute's standardization.

These fonts aren't technically necessary anymore, but they're still used pretty much everywhere.

These days, OCR is way more capable than when it first came into being—we do it on phones and over the web these days. That said, there are always ways to improve the process. Including, of course, through typography.

Last year, a company called Anyline, which sells a software development kit for OCR on mobile devices, decided to take a fresh stab at the OCR font in an attempt to update it for the modern day. 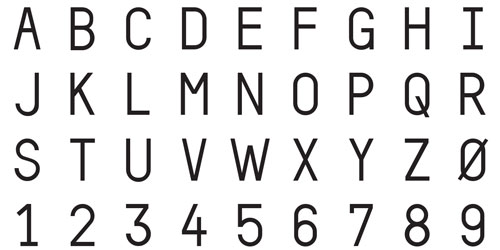 "After 58 years we thought it was time for a new and better looking OCR font. That is why we simply designed one ourselves," the company's Sophie Kreuzer wrote last September. "Even if you think that OCR fonts are outdated because almost every computer-written font is readable, there are still quite some advantages about it. And through our experience a lot of sectors still use OCR-A/B for their product specifications."

The company made it available for free, maintaining its focus on the goals of the original fonts—to make the letters just as readable for machines as they are for humans.

It's hard to say whether MoMA will give them a place in their collection, but it's an impressive start.