The video of two people skydiving in a tube looks almost magical. They look as if they can move in whatever way they want. How does it work?

Imagine a board horizontal in the air. Now suppose I stand under the board and throw balls at it. The ball strikes the board and bounces off. That's not hard to imagine, but here's a diagram anyway. 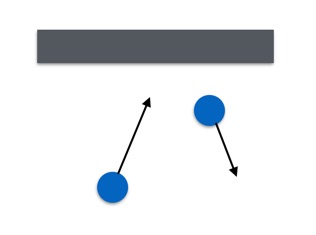 Because the ball has mass and is moving, it also has momentum (which physicists like to represent with the variable p, just because). The ball rose before hitting the board and descended afterward, meaning the momentum had to change. Now I can write a very useful model called the Momentum Principle.

This says that a net force on an object changes that object's momentum. Or you could say the rate of change of the vector momentum is equivalent to the total vector force on that object. Either way, it says something about the ball. It changed momentum, so a force definitely acted on it. The horizontal board provided that force. However, forces are an interaction between two things. If the board pushes on the ball, the ball also pushes on the board.

Now suppose I throw a whole bunch of balls at the board. Each ball pushes on the board. If I throw with enough force, the total force on the board is zero—balls pushing up, gravity pulling down. With a net force of zero on the board, its momentum is constant—zero. It just stays there, hovering. It's like magic, but we call it physics. Replace the balls with air and the board with a human and we call it indoor skydiving.

Actually, this is a lot like how you model a hovering helicopter, but in that case the helicopter takes air from above and throws it down. Outdoor skydiving works the same way, only the air remains stationary and the human runs into it, causing a change in momentum.

Now you know the basic physics.

Moving Up and Down

If the humans in the skydiving tube simply hovered motionless, you'd find it cool for a few seconds, stop watching, and go back to viewing a cat video. But these people move about in an almost mesmerizing way. How?

Try this simple experiment. While riding a car, stick your hand out the window. You feel the air pushing against your hand, right? The faster the car moves (and the faster your hand hits the air), the greater this air force. Now try closing your hand into a fist. Notice anything different? You should feel a decrease in the air force. Yes, the air force depends on the size of the object—a smaller object will have fewer "air balls" colliding and thus a lower force.

A human in a skydive tube can do something similar. Consider a flat, horizontal human who then tucks into a ball.

For the skydiver on the left, the net force is zero and the change in momentum is zero. On the right, a decrease in area means a lower air force (but gravity remains the same). Now there is a net force pushing down. The skydiver will increase momentum in the downward direction, resulting in a downward motion. To stop this downward motion, the human must increase the air force to a value greater than the gravitational force so the change in momentum slows the descent.

Oh—I am assuming that the air speed in the tube remains fairly constant. I suspect this isn't actually the case, but I haven't been in one (yet).

Moving to the Side

What if you deflected these air balls such that they traveled to the side instead of down? 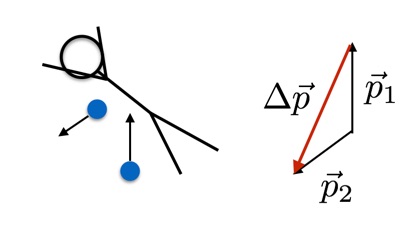 The change in momentum for the air ball would be down and to the left. This means the force on the human would be up and to the right. A force pushing the human to the right would increase the momentum in this direction and cause an increase in speed. To stop, the human simply makes a force in the opposite direction of motion to decrease the momentum (and speed). It sounds simple, but the devil is in the details. It's pretty difficult to position your body to get just the force you want.

Indoor skydiving is more than just up-down, left-right. Really cool skydivers turn. That requires torque, which is just like a force except it deals with rotational velocity, not linear speed. A skydiver can exert a torque with a slight turn of the hands. If the two hands push air to the left, the skydiver rotates to the right. Of course if you want to rotate but not move, you need some other force to balance the force from the hands. Yes, it's complicated.

But the torque is a product of force and distance. So a small force can create significant torque if it is far from the center of mass. That's why the hands make such great tools for creating torque. Of course, expert skydivers can use more than their hands to exert a torque. That's why they are experts.