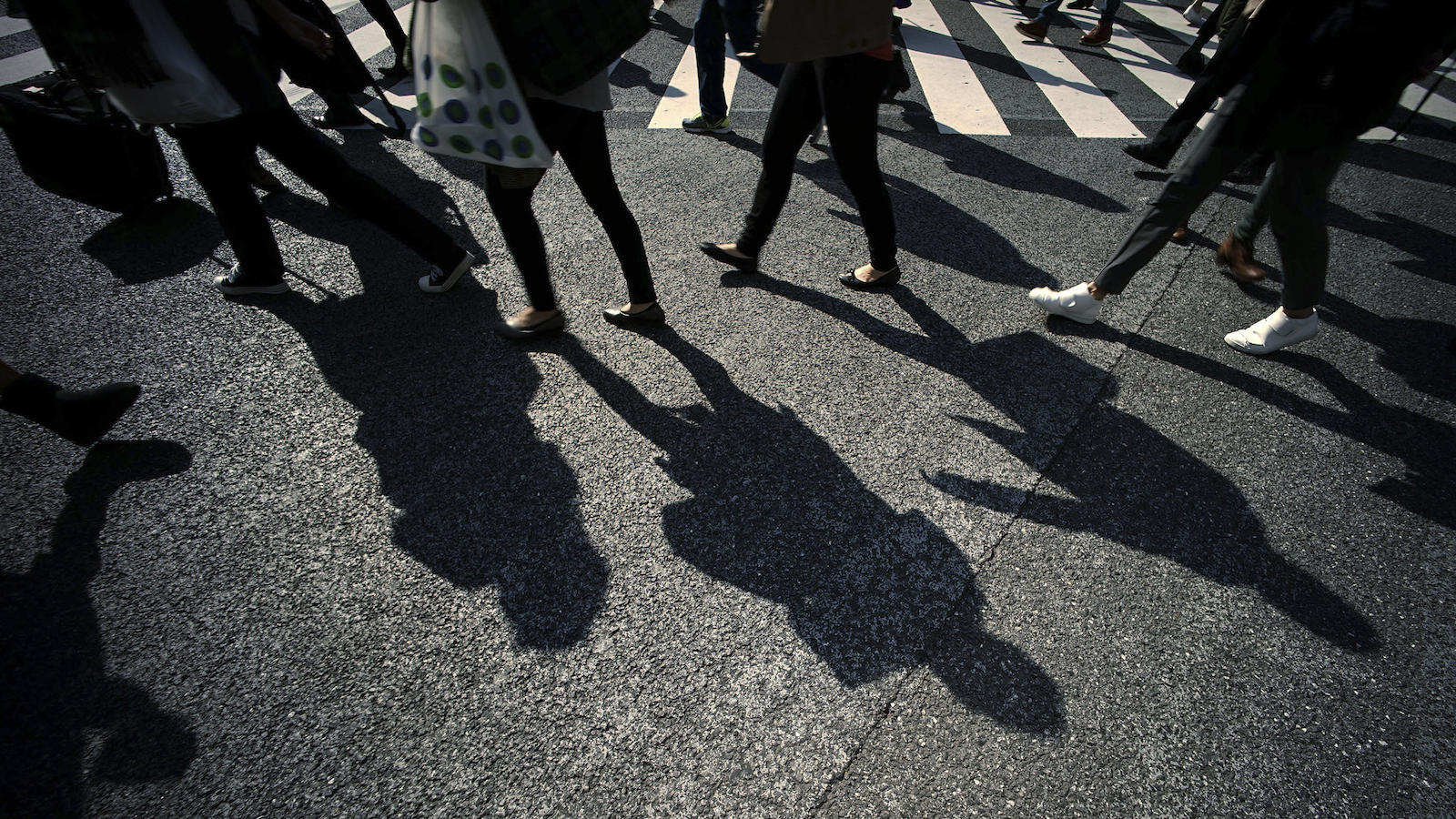 The presence of people doesn't stop you from feeling lonely. (AP Photo/Eugene Hoshiko)

Despite the world's population creeping upward by around 200,000 people a day, many of us have never felt as alone.

We are more connected than ever before, yet we somehow feel more isolated. We have the ability to reconnect with our high-school classmates and talk to our heroes on social media, yet we feel that we have less intimate connections than the generation before us. And it's not just a nagging feeling in the back of our minds—it's affecting our physical health, too. The news headlines speak for themselves: "Chronic loneliness is a modern-day epidemic." "Loneliness is a public-health threat." "Widespread loneliness is killing people and we need to start talking about it."

But our social lives aren't the only place we experience loneliness. We are also spending more time working than we have in previous decades—especially in the US. All those extra hours spent around our colleagues should help us foster closer relationships. But when you arguably spend more time with your workmates than your own family, why can the office sometimes still feel so isolating?

BYU psychology professor Julianne Holt-Lunstad is one of the world's leading researchers on social connection. Her research has uncovered some alarming facts about what isolation can do to both your body and mind. For example, one of her most shocking findings was that extreme social isolation holds the same health risk as smoking 15 cigarettes a day. (So much for "social smoking," right?)

In this interview, Holt-Lundstad holds our hand through some sobering statistics—but also suggests how to overcome this social phenomenon with a smile. Some of the things discussed include:

This interview has been lightly edited for clarity.

Julianne Holt-Lunstad: It's important to clarify that definition. People use social isolation and loneliness interchangeably. Social isolation is thought to be the objective indicator of a lack of social connection, in that it refers to only a few—if any—relationships and infrequent social contact. Whereas loneliness is thought to be a subjective indicator of feeling alone. Of course, it's a distressing feeling either way.

However, they are still at risk. Even if you feel that you don't need it, that does not necessarily mean that your body—from a biological human factor—doesn't need it. It's a primal need.

What is the connection between sickness and loneliness from both a mental and physical health perspective?

There's a wide literature of research that demonstrates the pathways by which being socially connected or lacking social connection can ultimately influence physical health outcomes. Much of my early work was focused on laboratory studies where we looked at physiological responses to stress, and whether social relationships helped you cope with stress or were a source of stress. I started realizing a much broader influence that relationships can have on our health.

How has society changed to cause this to be a more prevalent problem?

That's a really good question. We don't have a clear answer on that, but there are some hypotheses.

One way in which we can look at this is demographics. For instance, there's some US data from the PEW Organization that says the majority of Americans do not participate in social groups. They're not volunteering. There's reduced participation in religion or religious groups. In many industrialized countries, we are also seeing decreasing rates of marriage, an increasing rate of living alone, increased rates of childlessness, and decreasing size of household. Now of course these are all crude indicators; just because you're unmarried or living alone doesn't mean you're not socially connected. But nonetheless these are robust indicators of risk, and these kinds of things provide a safety net. But just because you are married doesn't necessarily mean you're not at risk—we have to pay attention to the quality of relationships.

Another major hypothesis is technology. We're more connected than ever via technology. I do need to preface this with the fact that the data on technology and loneliness is limited at this point: We don't really have much to compare it against. The data that's available is primarily correlational, meaning we don't know the nature of the facts. So it could be that spending time online makes people lonely, and it could be that lonely people spend more time online. Indeed, there's some evidence that this may be bidirectional.

But there is some evidence that looking at time spent on technology or social media is an indicator of well-being. There's also evidence to suggest that how we use social media may also have different effects. Whether you're actively communicating with others in order to actually connect in person versus simply passively scrolling through your social media feed may produce a different effect. So we can't make blanket statements about the role of technology. It's complex. There's some evidence to suggest that even how it's used may have different effects depending on each group. For instance, using it for communication seems to be associated with positive outcomes for older adults but negative outcomes for younger people.

Are some demographics more likely to feel lonely than others?

Yes. There was a report that just came out that used a nationally representative sample of about 20,000 people. In that study, the Z generation reported the highest rates of loneliness relative to other ages of older adults. And there is some data out in the UK that shows that young are showing increased rates of loneliness. There's a lot more research being done among older adults, but younger adults are an area where we need a lot more research.

Workplaces can feel very lonely, despite being surrounded by people. How can we be around coworkers and still feel lonely?

It's complex. Of course people who are lonely bring that with them to work. Though there can also be factors at work that can contribute to loneliness. Loneliness can influence absenteeism and productivity, so it's important for employers to consider. It's quite likely that most adults spend more waking hours at work than they do with their family and friends, so it suggests that work may play a very important role in combatting loneliness.

But we need to think beyond just putting a ping-pong table in the workplace. How do we foster real connections among our coworkers? How do we foster and encourage more of a work-life balance so that individuals have time to develop relationships outside of work? Most workplaces also have "wellness programs..."

The fact that you laughed after that is not a good sign...

We need to think beyond just putting a ping-pong table in the workplace. How do we foster real connections among our coworkers?[/pulluote]I think because we all know that there is some limited success among these. Most workplaces provide some sort of tools or resources for planning financially for retirement, but that should include planning socially for retirement, too.

Speaking of socialness at work, is lunchtime a place we could look to for social connection? How could we use that hour to fix this problem?

It's so funny that you mention that! I once spent a sabbatical as a fellow at the Netherland Institute for Advanced Studies, which was a group of experts brought together about social relationships, technology, and health. Part of the fellowship was that all of the fellows had to come together for lunch. They wanted diverse experts to come together over a meal because they knew that by conversing and interacting we would come up with better ideas than we could on our own. I don't have data to say that it "related to a 30% increased rate of this or that," but it is interesting. It certainly seems like something worth exploring, given that it could foster not only relationships among co-workers, but could foster ideas that could increase innovation in the workplace.

In what other ways could employers try to make the office less lonely?

Aside from the retirement planning and the wellness programs, there needs to be more fostering of work/life balance. There is data that shows that longer hours spent on work aren't always associated with better outcomes, greater success, or even greater productivity. Those extra hours aren't necessarily well spent and can be damaging to employees' health and well-being. That can ultimately hurt a place of employment, whether it's from productivity or absenteeism or health-related costs.

I'm going to be visiting Denmark this summer. Denmark is known to be one of the healthiest countries in the world on the World Happiness Index. One factor they cite that is part of this is that there are strong social norms that the workday ends at 5pm. If someone has a family, you don't schedule meetings after 4pm.

That shows that social norms play an important role. Sometimes a workplace may have policies, but the way in which things play out in terms of actual practices and norms of acceptability may be very different. Workplace practices and policies need to be systematically evaluated in terms of how they foster connection—or take away from it.

We also have a larger number of people freelancing and working from home than ever before. How does this apply to them?

Of course there are a variety of situations. I think it's difficult to say overall. For some, working from home may have a number of advantages because it allows a greater time to spend with family and friends. On the other hand, it could be incredibly isolating for some, particularly if they don't have those other kinds of relationships—and then on top of that, they are not creating relationships with coworkers. It's difficult to have a blanket statement about all of it, but it's certainly something we need to pay attention to and look more carefully look at. Ideally, we should find ways to capitalize on its strengths and acknowledge and address its limitations as well. But it would be a shame if we got rid of it all together, because it may be useful in some circumstances.

This article is part of Quartz Ideas, our home for bold arguments and big thinkers.