It's hard to tell where the world ends here on the Alaska North Slope.

In the subzero twilight, when the Arctic winds snarl, snow and cloud stretch to every horizon in a seamless vault of spectral white. Beyond the tundra, five miles out on the frozen sea, oil workers from a tiny outfit called Caelus Energy have welded the drilling rig shut against trespassing polar bears. 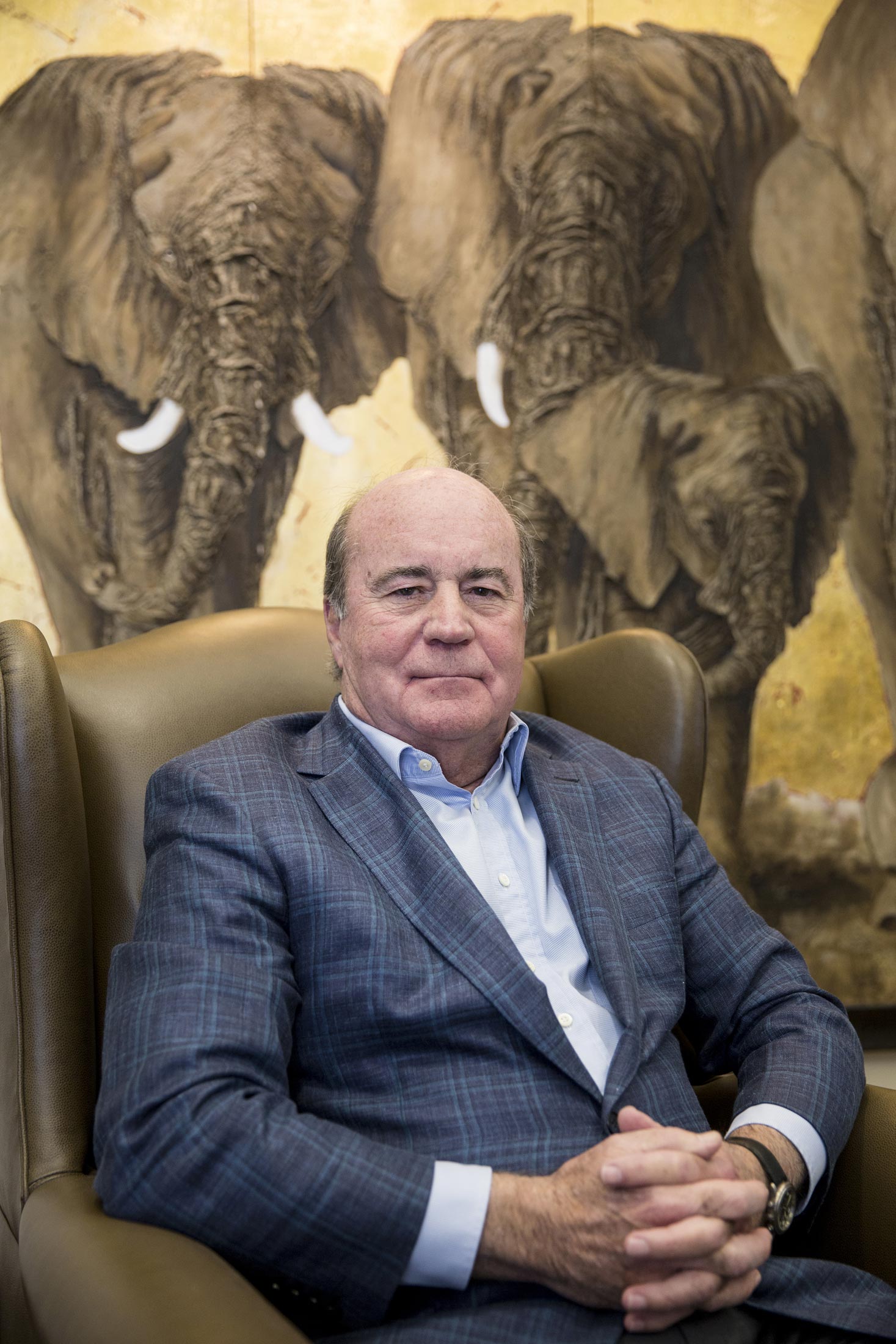 Musselman at the Caelus Energy headquarters in Dallas.

"Spooky," one of them says into the whiteness, and he's right. The North Slope in February is beautifully, impossibly spooky.

This is where Jim Musselman hopes to save Alaska, or at least make a fortune trying.

In a shallow estuary called Smith Bay, Musselman's flyspeck company will work to extract an astonishing 6 billion barrels of crude. The nearby tundra, Caelus says, could yield 4 billion more.

If Musselman is right—if he can actually make this happen—it would be nothing short of a miracle. Everyone in the state knows firsthand that the fracking revolution in the Lower 48 has crushed Alaskan oil, that '70s-era answer to OPEC. Four decades after the Trans Alaska Pipeline System went live, transforming the North Slope into a modern-day Klondike, many Alaskans fear the best days have passed. Jobs have vanished. The budget in Juneau is a disaster.

And all of this, every last painful bit, comes down to oil, the state's lifeblood. Hard economics are slowly rendering the Tans-Alaska obsolete. The great pipeline, and the money, are running low.

Which is why everyone from the governor down hopes Musselman can somehow pull this off.

"With an oil pipeline that is three-quarters empty, this is good news," Governor Bill Walker said when word came of the Smith Bay find.

Good news, yes. But also a monumental challenge, and a monumentally expensive one. The closest pipeline is 125 frozen miles away. Linking up would cost roughly $800 million, Musselman says. That's the cheap part. Actual production could run $10 billion over a decade. Even Musselman, a Texas oilman with a record of big discoveries, might have trouble raising that kind of money.

David Houseknecht, a senior research geologist at the U.S. Geological Survey, says the Smith Bay discovery seems to have incredible potential. Then he adds: "But it's the last one you'd want to bet your retirement money on." 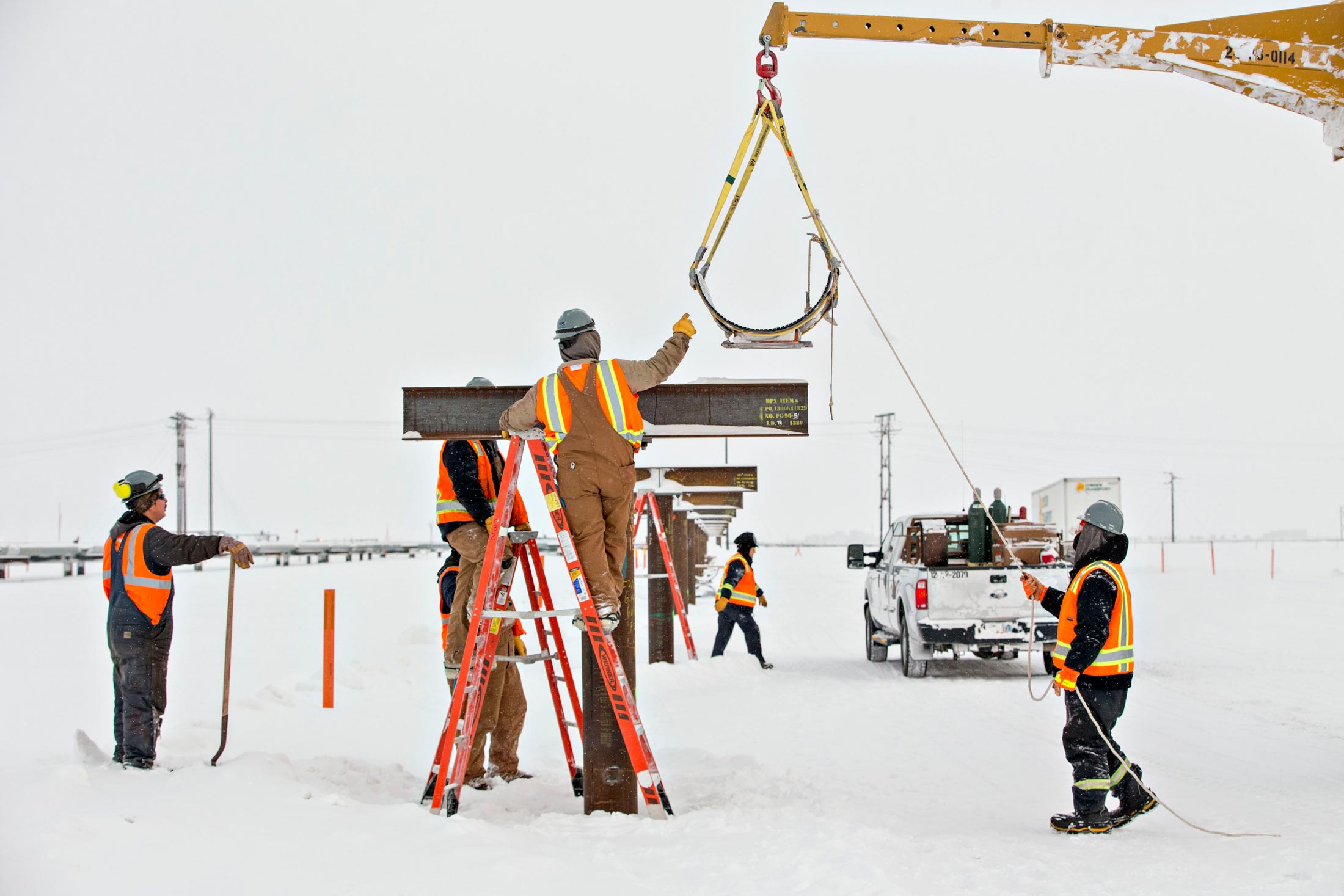 Workers position a mounting shoe for a pipeline being built to replace an aging line outside a BP Plc production facility in Prudhoe Bay, Alaska.

Even in the winter white-out, work never stops on the North Slope. On this mid-February day, BP Plc workers are plowing snow, fixing pipes and laying ice roads as the temperature falls to 30 below. An archipelago of brightly lit pump stations, drilling rigs and work camps spreads for miles.

Musselman, 69, dreams of turning Smith Bay into a rival to Prudhoe Bay, 150 miles to the east, where the Trans Alaska starts its 800-mile journey southward. Mega-major BP rules Prudhoe Bay. Caelus, by comparison, has 100 employees.

But no one searches for oil in Alaska unless he's prepared to be lucky. "North to the Future"—that's the state motto. When the oilmen came to this last great U.S. wilderness, they transformed it into a mini petro-state. Not even the 1989 Exxon Valdez spill, which blackened 1,300 miles of coastline, could cool the oil lust. Every Alaskan gets a cut just for living here. For decades now, the state oil wealth fund has paid each resident an annual dividend.

But in a world of fracking and lower-for-longer oil prices, why bother with Alaska? Big Oil has largely abandoned plans for the North Slope. Last year, a mere 515,000 barrels flowed through the Trans Alaska, roughly a quarter of the volume three decades ago. Walker cut Alaskans' dividend checks at $1,000, half what they used to be.

What is Jim Musselman thinking? The answer, here in the frozen north, is elephants. 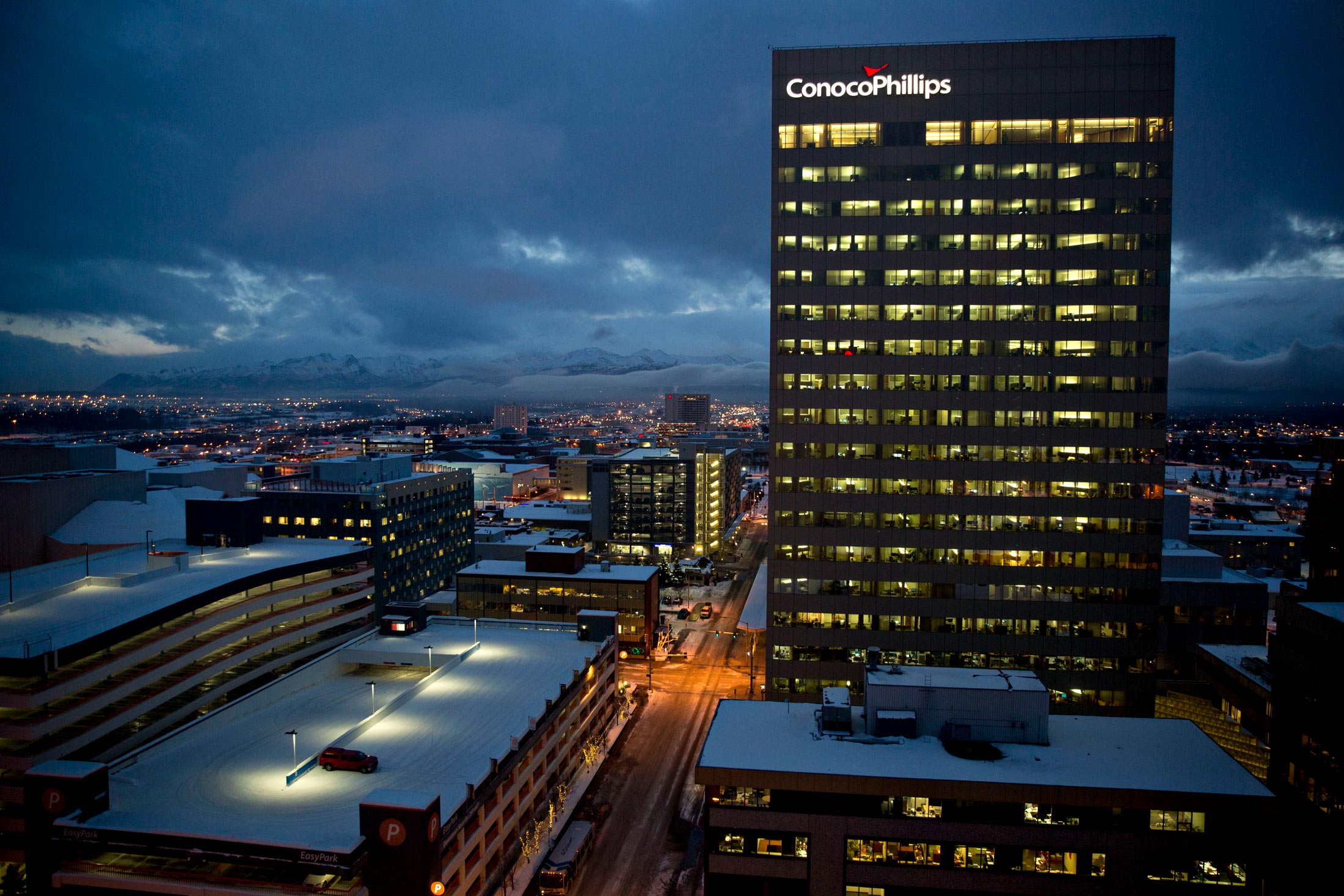 The ConocoPhillips building in Anchorage, Alaska.

Elephants: that's what people in the oil game call huge finds. A painting of a herd covers an entire wall of Musselman's office in Dallas. Maps of all sorts—Victorian London, Viking sea routes, the Roman Empire—dot the cherry paneling.

"I've always been fascinated by the early maps, by the spirit of people that didn't know what was there and would just strike out across the ocean," Musselman says. He has maps of the North Slope, too, big enough to wallpaper the room.

Musselman is a fourth-generation Texan who grew up on a ranch half the size of Manhattan. He bagged his first elephant in 1999, off the coast of West Africa, and eventually sold his company to Hess Corp. for $3.2 billion. Then, in 2007, he caught another big one, off the coast of Ghana.

Exxon Mobil Corp. offered Musselman $4 billion for the stake in the elephant that was owned by his company, Kosmos Energy, but Ghana blocked the sale in a dispute over royalties. Musselman made plans to take Kosmos public, even as the company became embroiled in a local bribery scandal. Even though investigators found no wrongdoing, Musselman was forced out, four months shy of the initial public offering. He left with shares worth tens of millions of dollars.

"Jim's a visionary who's had rare, repeated successes in discovering billions of barrels of oil in some of the world's most challenging environments," said Greg Beard, an Apollo senior partner.

Now Musselman has caught an elephant in Alaska. He just has to figure out how to get all that oil out of the ground and over to the Trans Alaska Pipeline. The shortest route runs through the pristine wildness near Teshekpuk Lake, home to caribou and polar bears. One tricky alternative would be running an undersea pipeline along the coastline, which is eroding because of climate change. Another would be to snake the pipeline somewhere else, away from Teshekpuk Lake.

Whichever way he goes, Musselman needs money first. He says he could take Caelus public or find a merger partner. Or he could simply "turn the keys over" to a bigger company. All of those would have been easier a few years ago, when oil prices were higher and Alaska was handing out generous tax breaks to the industry. 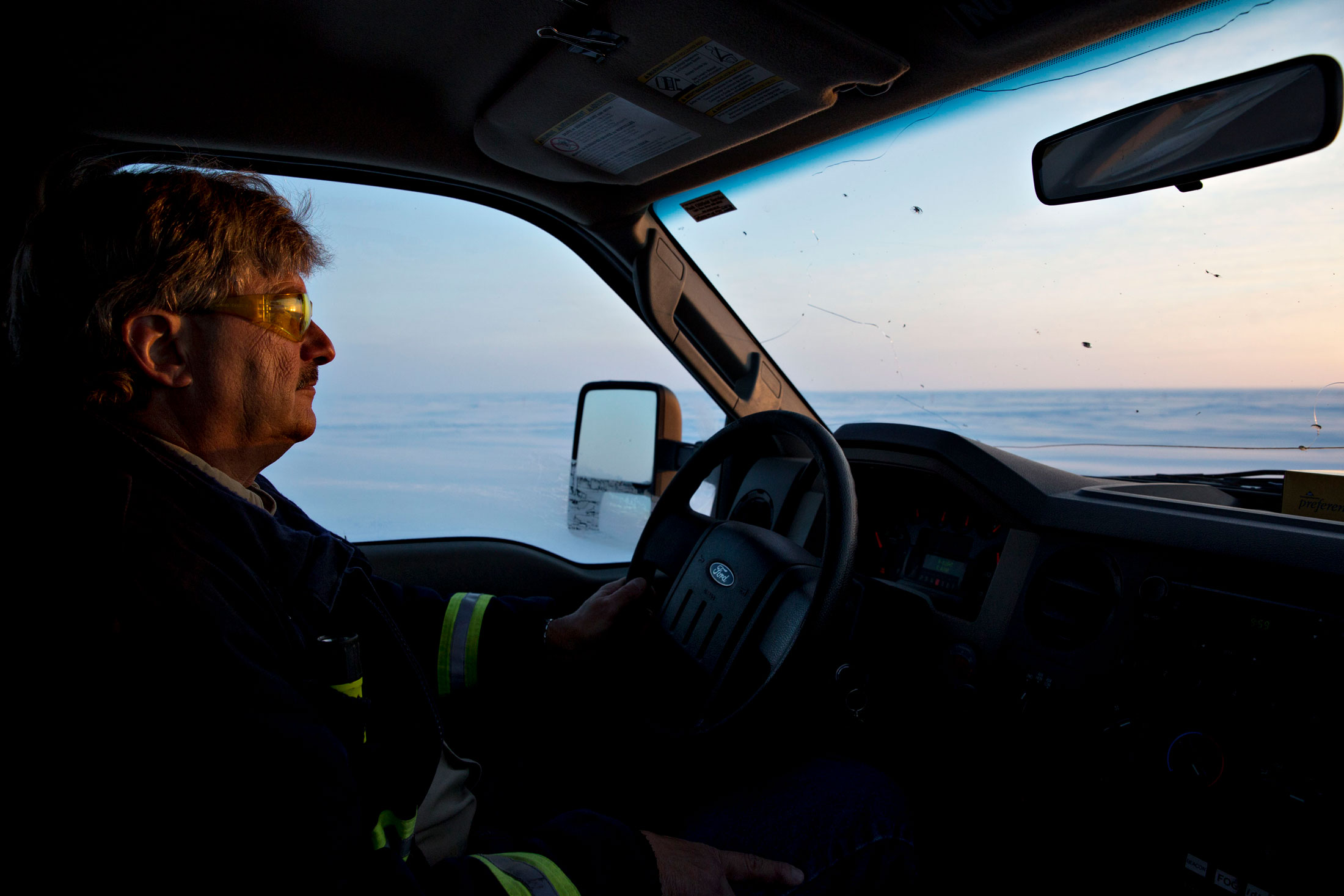 An employee drives a truck on an ice road near the Caelus Energy Oooguruk Development Project in Harrison Bay.

Musselman, in his gravely Texas drawl, told Forbes last year that Walker, the governor, "stuck his shiv in us." Alaska, Musselman complained, had done an about-face on the tax breaks that helped make Alaskan oil profitable. Walker, an Independent elected in 2014, said Alaska could no longer afford such largesse. He suspended $430 million of tax breaks and took the politically risky step of reducing dividend payments to residents.

Walker says he had little choice. "It would be a little unusual if they were not part of that discussion," the governor says of the oil companies. He's promising to help drillers in other ways, such as supporting expanded North Slope processing and building roads to open up more of the area for development.

Musselman tries to be diplomatic about it. Caelus had $100 million of tax breaks frozen. That's enough to make a difference, given his dreams for Smith Bay. He acknowledges Walker faces an "impossible" fiscal situation, but says he is confident Alaska will make good eventually.

Last week, Spain's Repsol SA announced a 1.2 billion barrel discovery west of Prudhoe Bay, and Conoco greenlit three new fields in the past year. Still, the scrape over taxes is scaring off some would-be investors just as new discoveries are being made, says Paul Basinski, CEO at Houston-based Burgundy Xploration, another explorer prospecting in the north.

"Every one of them is concerned," Basinski says of the investors he's approached. "If there was more certainty there, funding would be a lot easier." 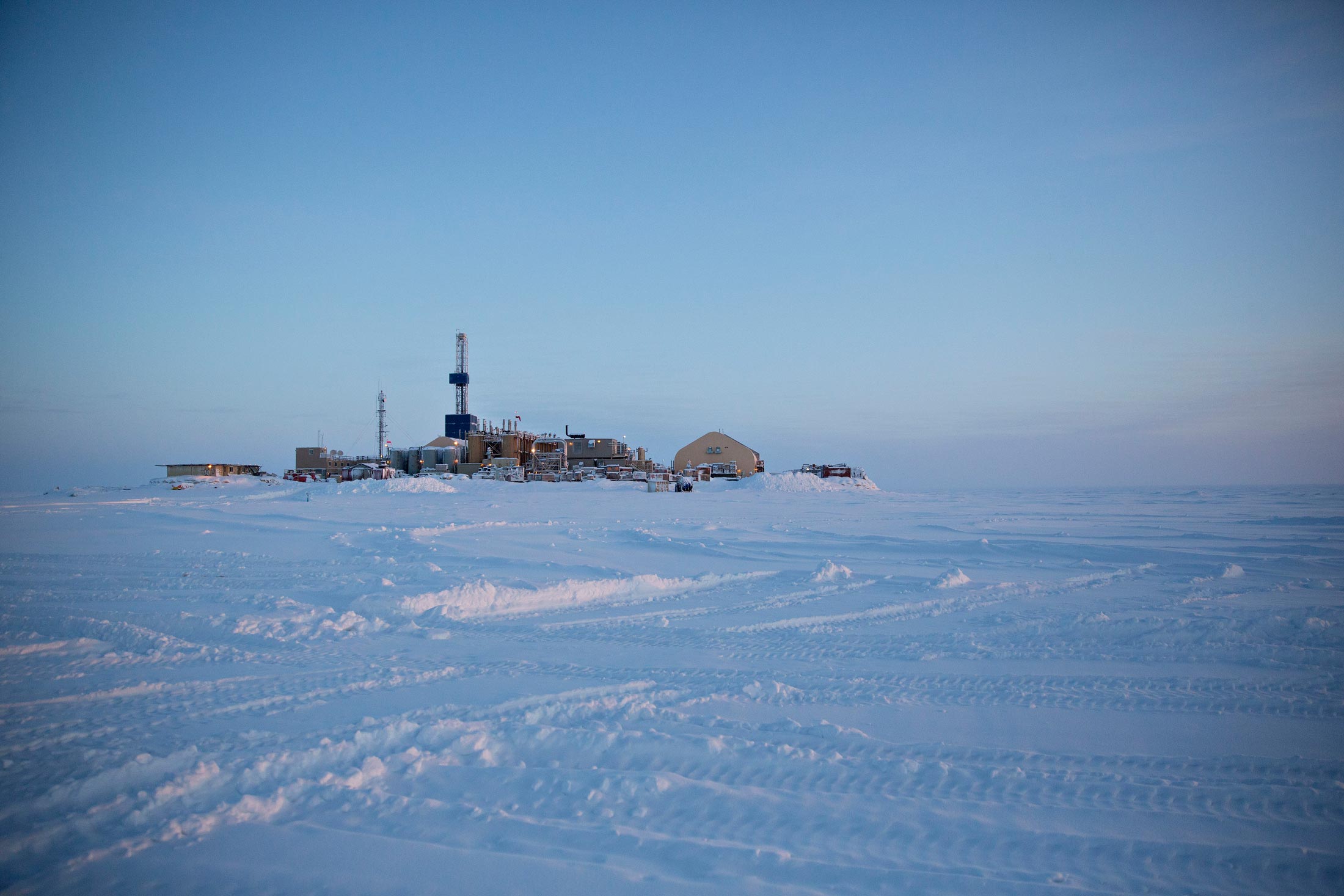 Plenty of small explorers like Caelus are sniffing around Alaska these days, but Big Oil is still king. Giants like ConocoPhillips, Exxon and BP, the North Slope's top producers, have the wherewithal to shoulder the high capital costs. But even for these giants, Alaskan oil is still a tough call. Costs vary, but the state estimates that it takes $50 on average to produce a barrel of North Slope oil and move it to market. At current prices, Alaskan oil barely breaks even.

"People are worried about the future," says Janet Weiss, president of BP's Alaska division. "It's a lower-for-longer world, and we've got to find a way to adapt to that." 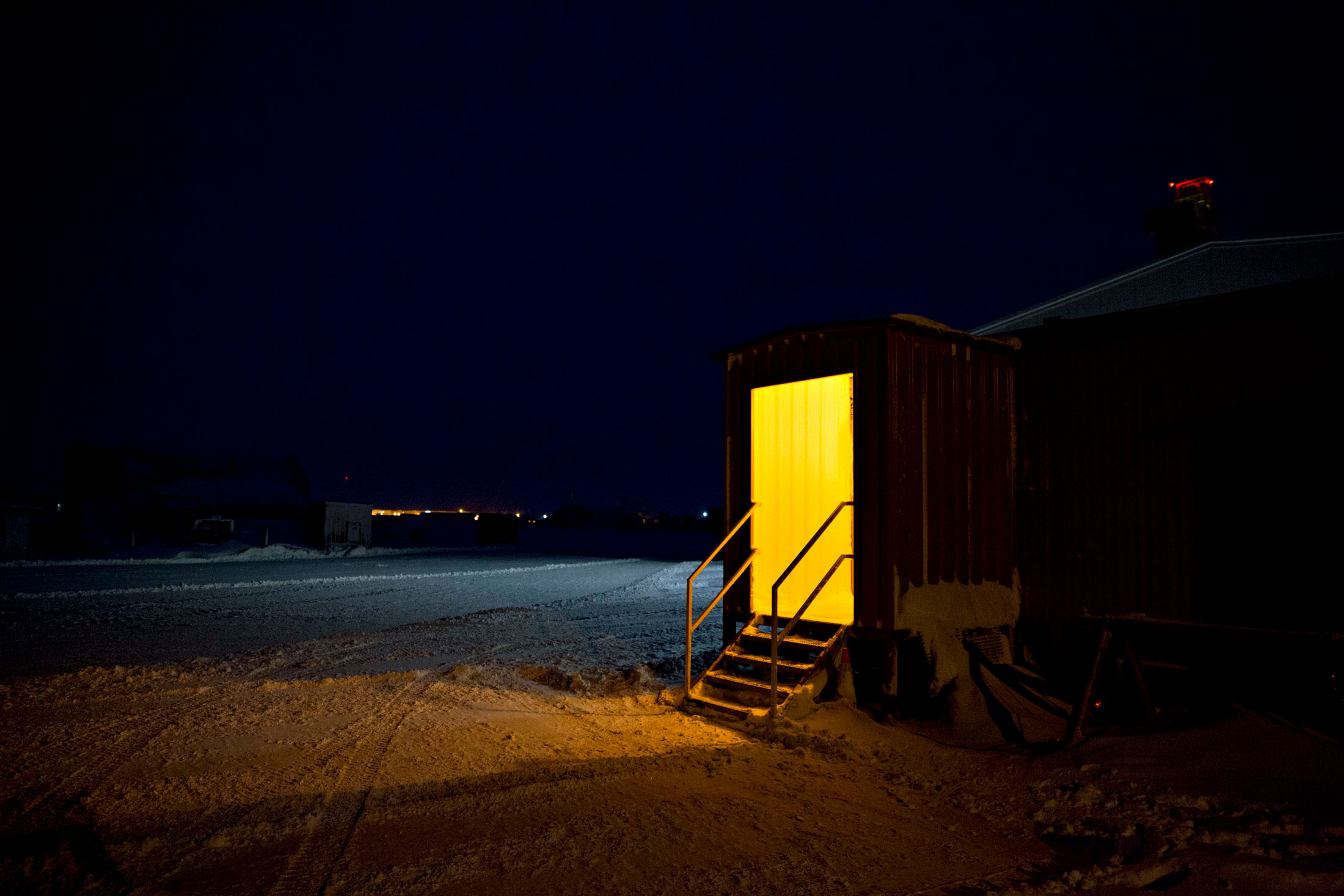 Light fills the doorway of a building in Prudhoe Bay, Alaska.

Back at Smith Bay, Caelus plans to drill a $100 million test well to help determine how much oil can be pumped. To find a buyer or partner, Musselman knows he has to take into account the lower-for-longer reality. He also knows he can't bring Smith Bay oil to market alone. But he's never been a corporate guy anyway. He's an elephant hunter.

"I don't think I'm any smarter than a lot of people in this business," Musselman says. "I just have enough stupid confidence where I think that I can find things that no one else can."