Eighteen years ago, Chris Pegula had a vision. A manly vision.

A vision to redefine fatherhood by redefining the childcare accessories that used to only accompany motherhood.

Pegula took patterns of camouflage and shades of hunters' orange and threw them on backpacks big enough to fill with all the diapers in the world. He then created a brand of diaper stuff for dudes, and in case someone might have thought that these were not childcare accessories for MEN, he called that brand Diaper Dude™.

And as he's watched parenting roles evolve over his almost 20 years in the business, Pegula believes he was ahead of his time.

In 2018, an increasing number of dads are taking part in parenting duties. According to data from the Pew Research Center, modern men are more likely to view being a parent as central to their identity. They report spending more time with their children than ever before, also helping out around the house more frequently. And working dads are about as likely as working moms to say they would rather be home with their children than at the office.

As the years drew on, some of these men who took on a greater share of parenting duties developed a distaste for the flowers and frills and pastels that often pop up on diaper bags. This distaste eventually led to a few of these dads — Pegula being one of them — taking matters into their own hands and designing manly bags in manly colors for only the manliest of men. 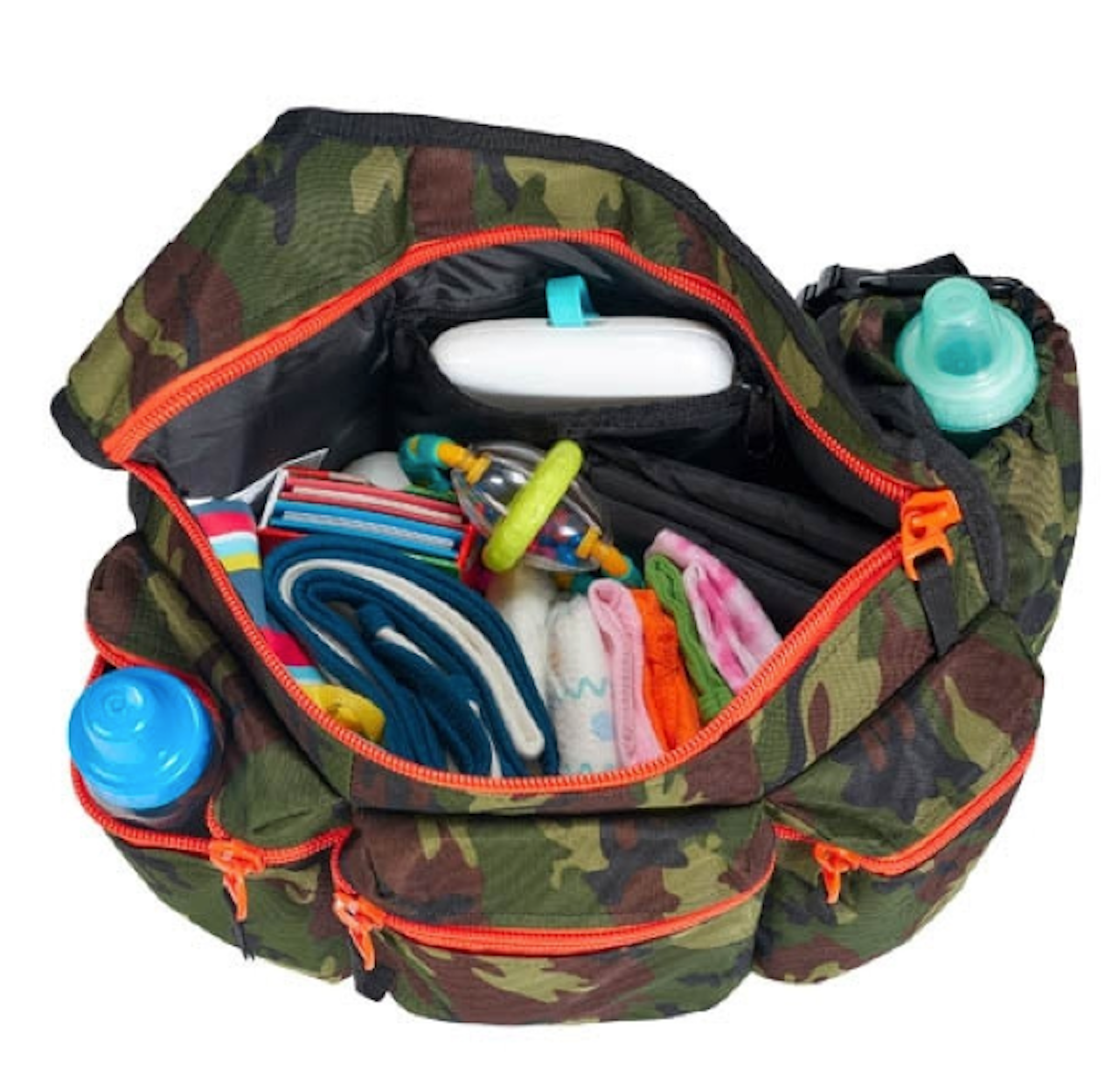 Pegula's very first Diaper Dude item was inspired by his brother-in-law, who he described as, "the most masculine, macho dude I could think of." The bag, which is still in stock, features a camouflage pattern and bright orange detailing. "I realized, if I can create a bag that he would wear, then this would be successful."

Diaper Dude's products are deceiving in appearance, posing as your average messenger bag, backpack, or tote.

And that's the point, according to Pegula.

"We wanted the product to be not just a diaper bag, but a bag you can use for anything. So as a dad, you don't have to switch identities," he said.

Diaper Dude has since had customers like Brad Pitt, Patrick Dempsey, and Matthew Broderick. The brand was featured on an episode of Oprah titled, "World's Biggest Baby Shower," creating such an interest in Pegula's bags that his website crashed. And Sacha Baron Cohen even carried a bag from Diaper Dude's brief line of female merch in his film Bruno.

In the spring of 2005, Scott Shoemaker and John Brosseau were just two dads complaining about "girly" diaper bags over a manly meal of beers and nachos when they got the idea to launch their own brand: Dad Gear.

"The mom carried the kid for ten months. It's time for the dad to carry the stuff," Shoemaker said.

The duo wanted to focus on the organizational aspect of daddy diaper bags. Their most popular item — the Backpack Diaper Bag — features 13 compartments specifically designed to cater every potential parent need.

At the very front of the bag is an easy-access baby wipes compartment. Inside, there's room to store up to four bottles. And the bag comes with a washable changing pad, as well as straps to attach to any stroller.

Each backpack is lined with a light color fabric, in order to eliminate the "big black hole" effect, according to Shoemaker.

"So in that crisis moment, you're not digging through some dark bag," he continued. "You know exactly where everything is." 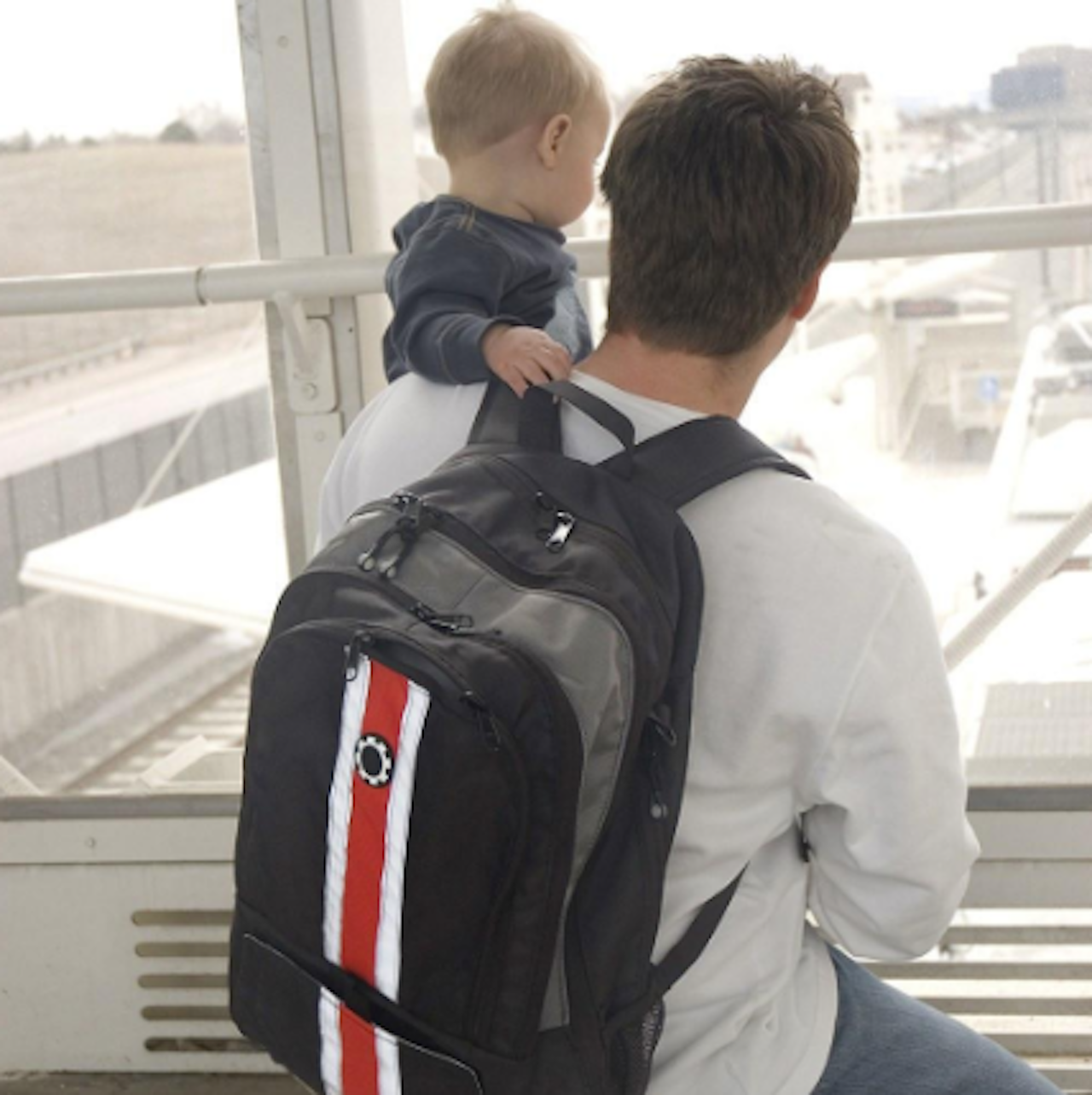 And the bags, of course, come in a variety of dad-appealing colors that seem to be influenced by the great outdoors, or at least an LL Bean catalogue: "forest green," "burnt orange," "woodland camouflage."

Dad Gear's ultimate goal, according to Shoemaker, is to "inspire" their dad customers — similar to the way the perfect pair of jorts and New Balances may inspire dads to have a killer night out drinking beer and eating nachos with their dad-bros.

"If you're going to go out for a night on the town, and you gotta wear something you hate, you don't feel good. You're not going to interact with people the same way you would if you were wearing your best look," he explained.

"We want dads to feel that same way when they're taking care of their kids."

HighSpeedDaddy, started in 2016 by National Guardsman Craig Risoli, sells diaper bag backpacks made of military-grade tactical material. Risoli emphasizes the durability of his bags, which are offered in "coyote brown," "major green," and "multicamouflage." Risoli even claimed that men in his unit have taken the backpacks on army infantry missions and returned with the bags completely unharmed. 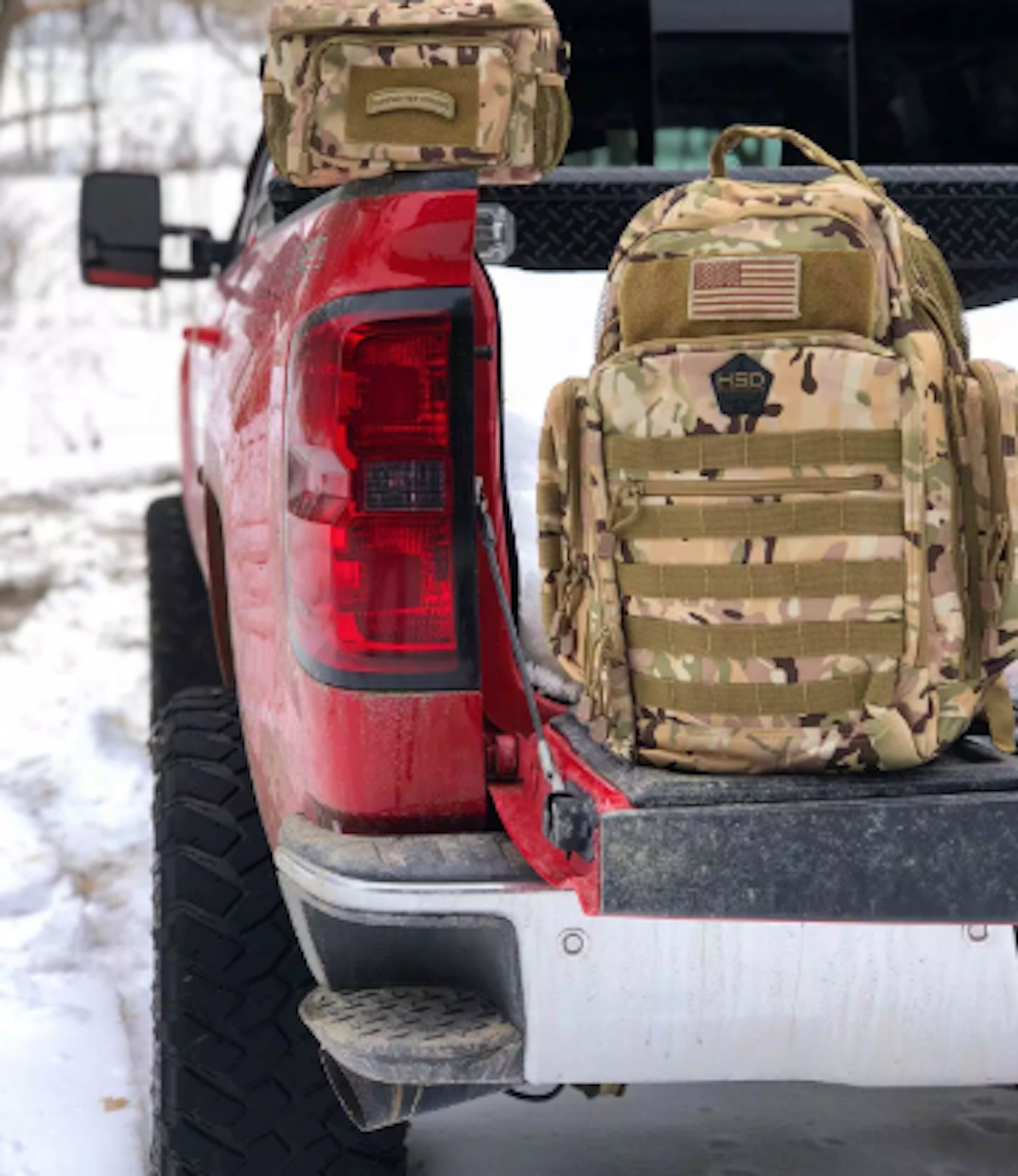 Another military-related dad merch company, Tactical Baby Gear, advertises "a line of diaper bags and accessories that look like they were ripped right out of a SWAT team van."

The company, which was started by Beav Brodie and features the tagline "Ditch the girly diaper bag," sells diaper bags, baby carriers, and "tactical teddy bears."

And the best part of their signature bags, according to Tactical Baby Gear's site?

"It just plain looks cool. Not a frill to be found. Not a ducky in sight."

On one level, the popularity of these painfully macho baby gear companies illustrates that the ur-masculine idea that life should be viewed as a never-ending series of conflicts. As such, it's clear that many dads who want to be more involved in parenting feel they must cancel out the girly-ness of caring for a child by donning a disguisable diaper bag in a woodsy color that may as well be stamped with an "I HAVE A PENIS" sticker. While progress is being made with dads' roles in the home, these brands make it clear that some men are still afraid to be anything but manly.

But if we're not going to eliminate these gender norms any time soon, at least these brands are trying to expand masculinity so that it glorifies participating in childcare.

Pegula maintains that his brand is not necessarily about protecting one's masculinity as a father — it's about being as involved in the parenting duties as possible.

"Our products are an invitation for men to become a part of the parenting process," Pegula said.

"That used to seem intimidating to men, but now, it doesn't have to be."