In 1928, a handful of German chess nerds came together to form the Internationaler Fernschachbund, the first international correspondence chess league. Correspondence, or postal chess, is played just like regular chess, except rather than having two players sit across a board from one another, they play by marking a card which is then sent by mail from one player to another and it is not unheard of for a single game to last several months or even years.

By 1939, the Fernschachbund disbanded due to political tensions in Nazi Germany, but soldiers and civilians alike continued to pass the time by playing postal chess. This all ended in 1943, when US and Canadian censors began targeting postal chess games, especially trans-Atlantic games, out of fear that the games were being used to send secret messages to enemy forces.

According to a 1991 article in Chess Life and Review, the censors would blot out the chess board on the playing card for any US servicemen playing postal chess. This made it impossible to see the opponent's move and continue the game. At first glance, this paranoia seems absurd—after all, chess grandmasters are pretty smart people, and it would seem pretty obvious if people were using fake chess moves to hide hidden messages. All it would take is one Bobby Fischer-type to check all incoming and outgoing postal chess games to make sure they were legit, right?

"I suspect one who knows the game and the pieces could spot something [suspicious]," Joan DuBois, author of the Chess Life article and affiliate relations associate of the US Chess Federation, told me. "But I suppose anyone could make up a code for anything if they put their mind to it. In times of war, everything is suspect."

So what exactly were the censors looking for, then, if illegal moves would be obvious? And for that matter, had chess ever been used to conceal hidden messages before?

Although there is woefully little information available on either of these topics, it seems that chess has, in fact, been used to encode sensitive military information previously. According to a 1918 article in Everybody's Magazine, one of the first instances involved an actress living in France during WWI who befriended a diplomat of an unnamed foreign embassy. One of her first questions to the diplomat upon meeting him was whether or not he knew of any good chess players in his home country. The diplomat did not, but eager to please the actress, he located a chess club and forwarded a note given to him by the actress, which contained a chess problem she was having difficulty solving. According to the article, the problem was, what opening move had been used in order to leave the board looking like this: 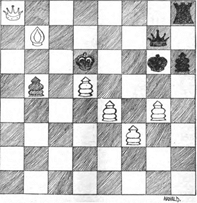 This chessboard supposedly was used to show the positions of French troops to Germans during WWI. Image: Everybody's Magazine

As it turned out, before giving the diplomat a copy of the chess problem, the actress had visited a German pilot who had been shot down behind enemy lines and was recovering in a French hospital. To make a long story short, the French government knew the Germans had a land survey of a strategically important area of France which housed French troops and when they intercepted the letter sent by the diplomat, they found that the chess board corresponded to this land survey exactly. In other words, if you divided a map of that area of France into 64 squares like a chess board, the positions of the pieces on the board corresponded exactly to the locations of French reserve troops.

The story is interesting, but is ultimately a pretty crude example of steganography, or the art and science of encoding secret messages in ordinary ones. A secret code this simple wouldn't fly in World War II, which revolutionized the fields of cryptography and steganography with the birth of the Nazi's supposedly un-crackable cipher generator, the enigma machine. Incidentally, when the codes generated by the enigma machine were finally solved, it was largely thanks to Alan Turing and his team of cryptographers at the UK's Government Code and Cypher School, which made a point of enlisting chess masters like Conel Hugh O'Donel Alexander to help in the codebreaking. Turing himself was also very interested in chess—in 1951, he developed the first computer program, albeit on paper, that was capable of playing a full game of chess.

Although chess masters helped in cracking the most important codes of World War II, it's still unclear just how the US government thought that a game of chess itself could be used to encode secret messages. Although DuBois wasn't sure how this might be accomplished, a 2009 research paper published in Security Communication Networks offers some clues. Entitled 'Chestega,' the paper is perhaps the only example where a methodology for coding secret messages in games of chess is explicitly outlined.

The work of Abdelrahman Desoky and Mohamed Younis, then graduate students of computer science at the University of Maryland, Chestega makes use of algebraic notation (a way of writing chess moves as numbers and letters corresponding to positions on a chessboard), as well as extraneous chess data such as listings of player rankings on the internet, to encode messages.

As Desoky notes in the paper, using the chessboard to conceal messages is the most intuitive method (like that used by the French actress during WWI), but also constrains the size of the message that can be sent by the number of squares on the board (64). On the flipside, algebraic notation can conceal much longer messages since "most chess games, especially at the master level, last for an extended duration and involve many moves." 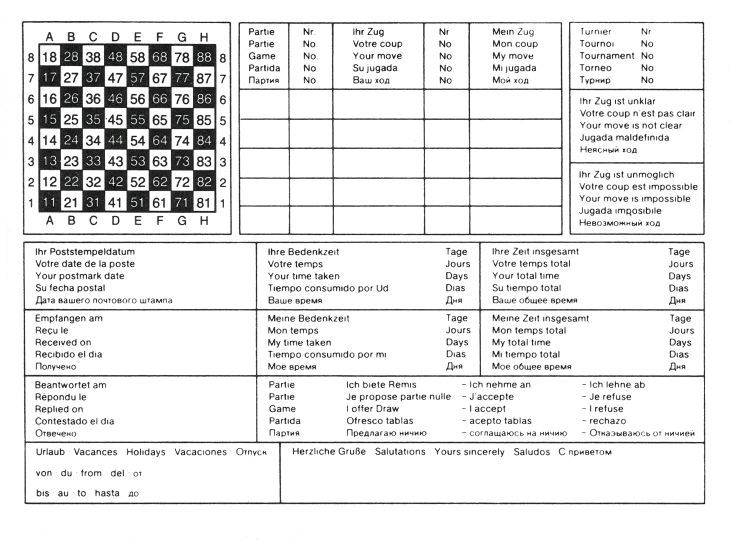 To make use of Desoky and Younis' chess code, a user must first convert the message into a string of binary numbers (1s and 0s) which are then divided into groups based on a predetermined arrangement between the people corresponding. This binary code is then rewritten as decimal numbers, which are then converted into portable game notation, a computer-readable equivalent of algebraic notation used by many computer chess games.

As Desoky pointed out, Chestega is most effective when used with games of chess that have already been played. This is because data can be concealed in the legitimate moves of the game, to help avoid any false or suspicious moves being used to hide data, which would raise flags for any chess adept.

"Chess is the hardest game to use for steganography because the rules in chess are very hard," Desoky told me. "For example, if we make a wrong move to hide data, this wrong move will be obvious to anyone and will count as noise. If they're able to detect noise, then they're able to detect the use of steganography and the purpose [of concealing data] will be defeated."

Whether or not a similar methodology has ever been employed by spies in the real world is unknown. However, in a strange case of Cold War-era espionage, Graham Mitchell, deputy director of MI5, the UK's intelligence bureau, was suspected of being a double agent for the Soviets, and a handful of correspondence chess games played a peculiar, albeit tenuous role in the drama.

Based on a series of correspondence chess games played by Graham Mitchell, a grandmaster of correspondence chess, and some players in Germany, Mitchell was suspected of sending secret codes meant for his Soviet handlers during a big investigation into the Cambridge Five spy ring. Supposedly, the game below contains one of Mitchell's devious messages, although the code has still never been cracked.

Today, the International Correspondence Chess Federation, which grew out of the seed planted by the Internationaler Fernschachbund in 1928, boasts some 100,000 members in over 60 countries. It seems unlikely that these chess players represent an international cabal bent on ruling the world and communicating their dastardly plans via their chess games, although if they were, we'd probably never know.

Subscribe to pluspluspodcast , Motherboard's new show about the people and machines that are building our future.