As the US debates drug policy and marijuana legalization, there's one aspect of the war on drugs that remains perplexingly contradictory: some of the most dangerous drugs in the US are perfectly legal.

Don't believe it? Just look at this chart, compiled with available data from the Centers for Disease Control and Prevention (CDC): 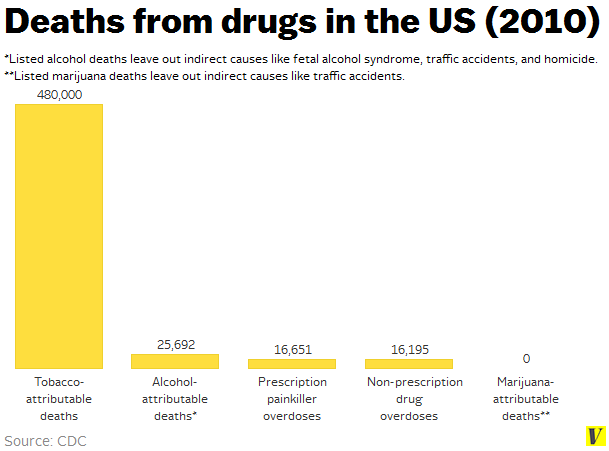 This chart does come with a big qualification: it's not a perfect comparison across the board. One driver of absolute tobacco and alcohol deaths is that both drugs are legal and easily available. Other drugs would most likely be far deadlier if they were as available as tobacco and alcohol.

But it's already established that it takes less relative doses to die from alcohol than it does to die from marijuana and even cocaine. An American Scientist analysis gauged the toxicity of drugs by comparing a drug's effective dose — the amount it takes to get a desired effect — to its deadly dose. The analysis found alcohol is deadly at 10 times its effective dose, while heroin is deadly at five times, cocaine is deadly at 15 times, and ingested marijuana is deadly at more than 1,000 times. (In practical terms, it's nearly impossible to overdose to death on marijuana because a user would most likely pass out before reaching a fatal dose.)

The direct death and overdose rates, however, leave out other factors that could lead to health and socioeconomic issues. Alcohol in particular is widely associated with various issues — more crime and traffic accidents, for example — that harm both users and society as a whole. 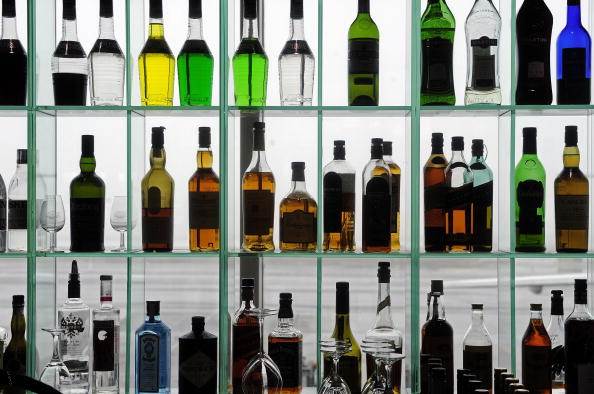 On top of the nearly 26,000 deaths brought on by detrimental health effects, alcohol caused more than 10,000 traffic fatalities in 2010.

alcohol increases the risk of a traffic accident 13 times over, while other drugs double to triple the risk

Again, some of this is a matter of access. If other drugs were as easily available as alcohol, they could cause more deadly traffic accidents than they do today.

But it's not really disputed that alcohol is one of the most dangerous drugs on the road. Columbia University researchers previously found alcohol increases the risk of a traffic accident 13 times over, while other drugs double to triple the risk and the detection of marijuana in particular less than doubles the risk.

Even when accounting for other factors, alcohol and tobacco are still more harmful than marijuana

A previous report published in The Lancet took a comprehensive look at 20 of the world's most popular drugs and the risks they pose in the UK. A conference of drug experts measured all the factors involved — mortality, other physical damage, chance of developing dependence, impairment on mental functioning, effect on crime, and so on — and assigned each drug a score. What they concluded: alcohol is by far the world's most dangerous drug to society as a whole. 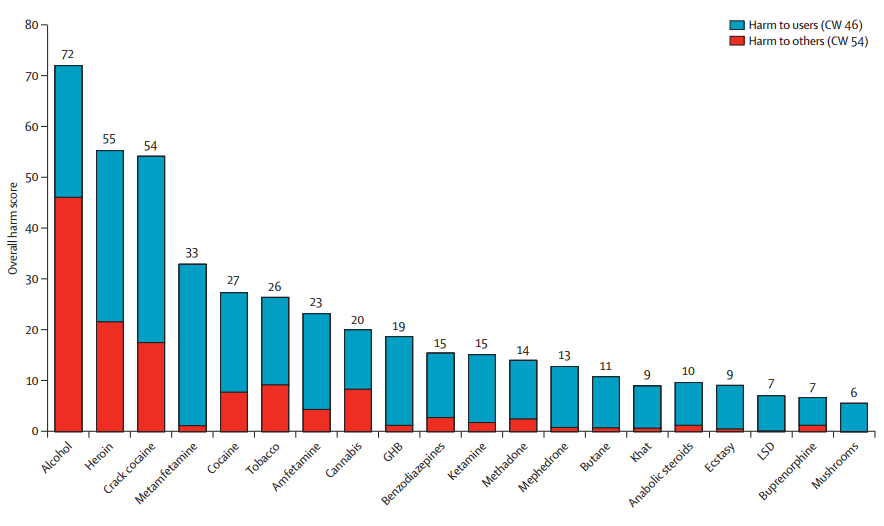 Chart by the Independent Scientific Committee on Drugs

What makes alcohol so dangerous? The health effects and drunk driving are two obvious problems. But there are other major issues rooted in alcohol-induced aggression and erratic behavior: injuries, economic productivity costs, family adversities, and even crime. (Alcohol is a factor in 40 percent of violent crimes, according to the National Council on Alcoholism and Drug Dependence.)

The report does come with a couple caveats. For one, it doesn't control for the availability of these drugs, so it's possible heroin and crack cocaine in particular would be higher if they were as readily available as alcohol and tobacco. And the findings are intended for the UK, so the specific scores would likely be somewhat different for the US.

Still, the conclusions provide some insight into the risk of each drug — and the findings aren't good for the drugs that are currently legal.

Throughout all these numbers, the consistent caveat is that illicit drugs would likely be more accessible — and therefore deadlier — if they were legal. But at least one survey from the pro-prohibition National Center on Addiction and Substance Abuse at Columbia University found marijuana, the main illicit drug in question, is already available to many teens. (Teens are typically the group of most concern for opponents of marijuana legalization.) 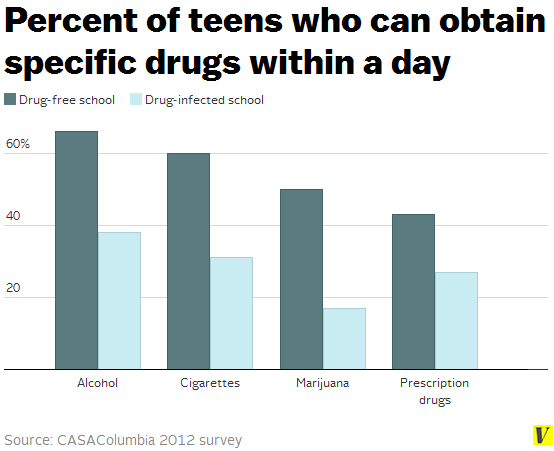 This, in a way, suggests full legalization can make a substance more available, which bolsters legalization opponents' claims that keeping marijuana illegal can keep it less accessible and therefore less dangerous.

But there's another way to look at this statistic: if it's true that prohibition makes drugs less accessible and the primary concerns with drugs are socioeconomic and health issues, then why should society allow a drug that's directly linked to hundreds or tens of thousands of deaths but not a drug that's directly tied to zero deaths?