Today in Tedium: Four decades ago this month, a company that helped set the stage for the modern computing era got into the toy market thanks to an announcement at the 1978 Summer Consumer Electronics Show. While it wasn't the first time that kids got their hands on something truly electronic, its influence ran deep, even as its technology was fairly primitive. With its robotic voice and limited memory, the Speak & Spell somehow mixed the seemingly incompatible worlds of education and entertainment in an impressive way. (It even gave a movie icon a way to communicate.) And today's Tedium is ready to tell you all about it. — Ernie @ Tedium

The year that Texas Instruments first started selling a "calculator-on-a-chip," considered to be the first microcontroller, a chip that combined the logic and memory functions of a calculator on a single device, allowing for the miniaturization of the calculator and, later, other electronic functions. The company patented its single-chip controller design in 1973, and the company later won a lawsuit against Intel over the invention of the microcontroller. 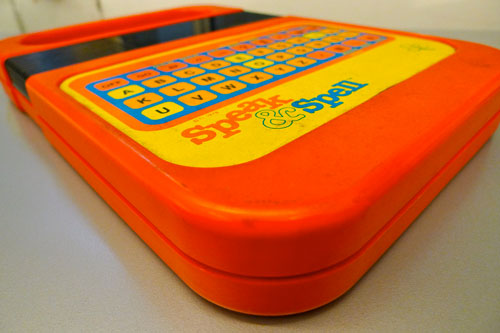 The reason the Speak & Spell, despite being a primitive device by modern standards, was such a fundamental piece of technology was that it hit a masterful mix of ambition and access.

It did something legitimately novel—it taught children how to spell using sound synthesis, rather than tapes or records. And it did so while still being small enough and cheap enough that picking one up in a store seemed like a reasonable thing to do.

This success had much to do with the chips embedded inside and how it used that technology. Broken down, it had all the parts of a modern computer, including a CPU, a keyboard, a display, memory, and even an expansion port. It was also, arguably, one of the earliest examples of a full-fledged portable gaming machine. Around the time of the first Game and Watch devices, a full decade before the Game Boy, the Speak & Spell was both handheld and relied on cartridges.

It was also something else—a culmination of more than two decades of work by Texas Instruments to take the technologies it had built under its roof—from the integrated circuit, to the handheld calculator, to the "computer on a chip"—into a blockbuster consumer product.

That's surprising, because the company thought it was actually building a device in response to a hit product. First conceived in 1976 as a followup to a device called the Little Professor, a calculator that quizzed kids on math problems, the device was brainstormed by a group of TI employees with differing skill sets. They quickly realized that trying to quiz users about numbers, which could basically be done visually, was different than spelling, a medium where pronunciation matters and words can be extremely complex.

The Little Professor was handheld, a slightly larger version of a calculator of the era. It seemed, at first, that the spelling tool they had in mind might not be nearly as handheld. Per a 1982 IEEE Spectrum article, written by two in the people at the brainstorming session, Gene Frantz and Richard Wiggins:

The new TI aid would need a voice, the panel agreed. But there was the rub: high-performance techniques then in use called for many arithmetic operations and large computer memories. Such a product would not be portable. On top of that, it would cost thousands of dollars.

As you might guess, TI solved many major technical problems as it made the Speak & Spell both portable—you could make the case that it's one of the first handheld computers with a keyboard—and relatively cheap. It didn't cost thousands of dollars, but $50 in 1978 dollars was still a relatively large chunk of change for a toy. With inflation accounted for, it's worth nearly four times as much now.

Given a budget of $25,000 to experiment with the idea, the company's Paul Breedlove, a computer specialist, led Frantz, Wiggins, and Larry Brantingham, among others, to build an electronic spelling bee program. 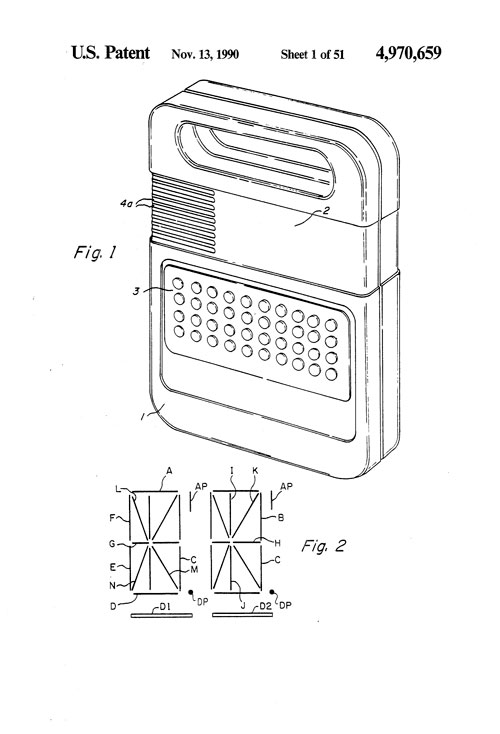 From the Speak and Spell's patent filing. The patent application was updated a number of times after its initial 1978 filing, most recently in 1990. (Google Patents)

And to build it, the company needed to balance the need for advanced electronics with the realities what the market was willing to spend. Fortunately, TI had a chip that could help with that: The Speak & Spell's CPU, the TI-built TMS1000, was cheap enough that it showed up in a variety of electronic toys during the era, including the Simon electronic game released by Milton Bradley in 1978. It cost just $2 a pop and TI was already making the 4-bit processors at scale by the time the Speak & Spell came along.

The device also needed a lot of integrated memory, for the time, so it was given a pair of 128-kilobit ROM chips to store hundreds of words.

The key element of the device, however, was the company's TMC0280 chip, which produced speech using a process called linear-prediction analysis to produce sound with the cadence of human speech, but doing so using limited bandwidth—a necessity given the tight parameters the device was working within.

Unlike many noise-making toys of its era, it was a solid-state machine, with no moving parts. It wasn't the first chip that could synthesize speech—inventor Forrest Mozer just beat them to it by a couple of years—but it was the first to put linear-prediction analysis into a single chip.

The development process could be contentious at times; a D Magazine article from 1986 reported how George Doddington, the head of the speech-synthesis department at TI, would often fight with upper management over the smallest details, including the size of the speaker and the color of the wires the device used.

And there were concerns internally that the public would not accept a device with a voice that was very much robotic.

"The average person had never listened to solid-state speech before," Frantz and Wiggins noted in their IEEE Spectrum article. "Exposure to talking machines was limited to movies like 2001: A Space Odyssey, in which the talking machine, Hal, was cast as the bad guy. Thus, TI learned, many consumers associated the characteristics of synthetic speech with a dull monotone."

This led to many rounds of consumer testing to confirm that the public was ready to handle a computerized voice in a toy. As is apparent now, if not then, but it turned out to be much less of a problem than realized.

The device, when finally released to stores in time for the 1978 Christmas season, only had a couple hundred words in its memory bank. And it required a whole mess of C-cell batteries. But it all came together, and helped make TI a household name.

The year that the TSI Speech+ calculator was first released. The machine, surprisingly, had a lot in common with the Speak & Spell despite having a completely different mission from the later device. Its goal? It was a calculator designed for blind people. The device, based on Forrest Mozer's work in speech synthesis, was cited in the Speak & Spell's patent. Watch a video of it over this way. 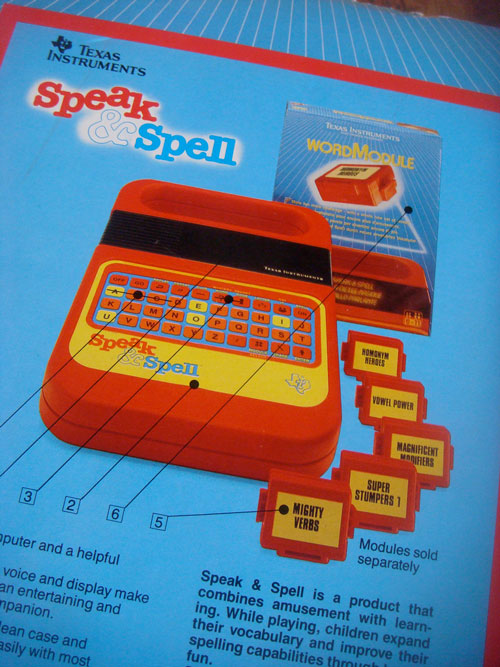 A Speak & Spell box, featuring some of its modules. (Russell Davies/Flickr)

Five notable facts about the Speak and Spell

— Randy Robinett, a TI spokesperson, discussing the impact E.T. the Extra-Terrestrial had on the company in a 1982 New York article. TI, which produced a special language cart with a movie theme, was one of the biggest beneficiaries from the film, which broke new ground from a commercial standpoint by using actual products to help drive the story forward. The Speak & Spell, of course, was at the center of that because it was the main part of the device E.T. used to "phone home," and because the movie was such a big hit, it represented a marketing coup for the company. 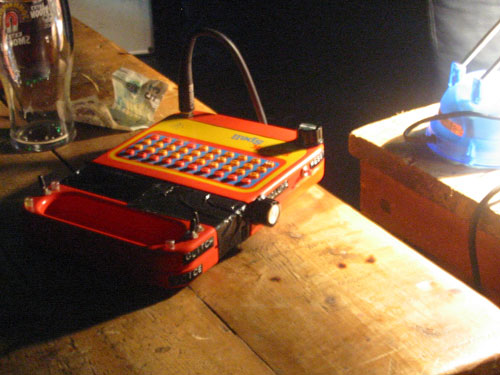 A circuit-bent Speak & Spell. This model is one of the earliest produced, which you can tell it has a physical keyboard, rather than a cheaper membrane keyboard. (John Tuffen/Flickr)

These days, the Speak & Spell's greatest legacy might be with circuit benders

It's been more than a quarter-century since Texas Instruments first stopped selling the Speak & Spell, meaning the technology is in stasis. The things that made it innovative in the 1970s and 1980s make it outdated now.

But on the other hand, that primitivism has its benefits in some senses, particularly circuit bending, or manipulating the hardware of a piece of electronics for unexpected results.

To put this another way, your smartphone has so many parts in such a small space, and so much complexity, that it's difficult to modify the hardware to make it do weird things the way a Game Genie might. But the Speak & Spell was enough of an open canvas that modifying them was relatively easy, and they were portable enough that they could be used as a traditional musical instrument in some cases.

Reed Ghazala, widely regarded as the father of circuit-bending, has been modifying these devices since they first came out. In a 2014 interview with Motherboard, he noted that the original appeal of the device was its capability to modify human speech, and implied that the original designers likely saw this appeal, too, but had to focus on the educational mission of the device.

"As a circuit-bender, the idea of synthetic human speech inside an instrument that could be bent was ... for me, it was exciting," Ghazala said.

This mindset of hackability has bled into mainstream music, with circuit-bent Speak & Spells being used by artists like Beck and Venetian Snares.

(Even the non-bent Speak & Spell had major influence—Depeche Mode named its first album after it!)

The concept of hacking an old electronic toy and turning it into something more interesting isn't unique to the Speak & Spell—just ask Teddy Ruxpin—but it's rare that the device would become such a canvas for creativity.

In a way, the Speak & Spell's success represented the world's greatest consolation prize for Texas Instruments.

The company was, and still is, one of the most important technology companies to come out of the United States. But while it was selling millions of the devices, and while it was leading the way with successful new markets like graphing calculators, it eventually ended up having to cede some key markets—like that of the personal computer.

The company flopped in its initial entry into that market with the overpriced TI 99/4, and then struggled thanks to the underpriced TI 99/4A. The systems relied on a 16-bit chip called the TMS9900, making it one of the first 16-bit computers on the market, but home computers simply weren't a strength of the company.

While the machines had their partisans, the company just couldn't get the model right. The earlier machine had a terrible keyboard, with the enter key on the same row as the shift bar; the later one, led into a price war by Commodore, had a business model that seemed to discourage third-party support, generally considered the lifeblood of a successful computer platform. (IEEE Spectrum has the gory details.)

Within a few short years, TI had left the market entirely, eventually becoming a PC clone-maker. Soon enough, it left the PC market, too.

But the company, in the end, didn't need to be a giant in the home computing space to be a major player in computing in general. While the Speak & Spell eventually faded from view, it represented the ways that the company, given a deep level of knowledge and the ability to follow its own ideas, could succeed on its own terms.

The Speak & Spell was a truly new idea at a time when most tech companies were trying to mimic their competitors. It's telling that the idea that was trying to be a toy, not a computer, was the one that left the fondest memories.