Since HBO's hit fantasy series Game of Thrones burst onto TV screens three years ago, the now-iconic opening credits sequence has engraved geography of Westeros onto the minds of millions of fans across the world. Any Game of Thrones enthusiast worth their weight in Valyrian steel knows the Greyjoys hail from the desolate Iron Islands; that the Reach, seat of House Tyrell, is famed for its harvests; and that Lannister wealth and power is derived from the gold deposits that riddle their lands around Casterly Rock.

What's not so clear is the relationship these places have to one another—and to the real world. How long is the King's Road? How big are Westeros's cities? How does imposing mountain fortress the Eyrie rank up to America's own famous monuments?

We've taken it upon ourselves to put together a series of infographics, giving the Seven Kingdoms some much-needed real-world perspective.

Scroll down for the complete mega-infographic, and click each one for a larger image.

We don't pretend this is definitive. In particular, our height rankings miss out multiple buildings we know to be vast in size. For example, the infamous castle of Harrenhal's lowest tower is half as tall again as Winterfell's highest, A Song of Ice and Fire—the book series the TV show is based on—tells us.

But without fim measurements for it, the Red Keep, Storm's End, or so many others, any estimates would be pure conjecture.

Winterfell is calculated based on the known height of its inner walls, at 100 feet—or 30 meters. The figure for the southern city of Sunspear, capital of Dorne and seat of House Martell, is given in-text, as is the Wall in the frozen North. Hightower, the lighthouse-cum-fortress and seat of House Hightower in the as-yet unvisited Oldtown, is likewise given a height in the books.

It's also interesting to see that despite the Wall's vast height (series author George R.R. Martin even admitted upon seeing the set for the first time that he "wrote it too big!"), its length is relatively paltry. At 300 miles, or 482km long, it's longer than the Berlin Wall (154km) or the Roman-era Hadrian's Wall (117km) that divided England and Scotland, and was Martin's inspiration for the Wall—but it's dwarfed by the Great Wall of China, which runs to a staggering 21,196km long.

The Wall does, however, play a vital part in quantifying Westerosi geography—by acting as a ruler. With a known length of 300 miles, it can be used as a yardstick to measure up the rest of the Seven Kingdoms. That said, the maps should be taken with a pinch of salt. They're intended to be approximations of Westerosi perceptions of the land, rather than pitch-perfect geographical records.

King's Landing, capital of the Seven Kingdoms, is the only city in Westeros for which we are given an exact population figure—half a million. This puts it only just behind U.S. capital Washington D.C., with 632,000, but both pale compared to New York's 8.3 million. For calculating the total population of Westeros, we deferred to the expertise of Elio Garcia, Game of Thrones superfan-turned-research-assistant for George R.R. Martin, who estimated the 40 million figure in a video.

Turning to Westerosi fauna, we've previously calculated the size of Balerion, "the Black Dread," a dragon that lived 300 years before the events of the TV show and books. (Check out our infographic comparing it to other famous dragons here.) We've now measured it up alongside the biggest and best animals Earth has to offer. If you haven't heard of Amphicoelias, the colossal dinosaur is believed speculatively to be the largest ever, based upon a single fossil discovered—and subsequently lost—in the late 19th century. 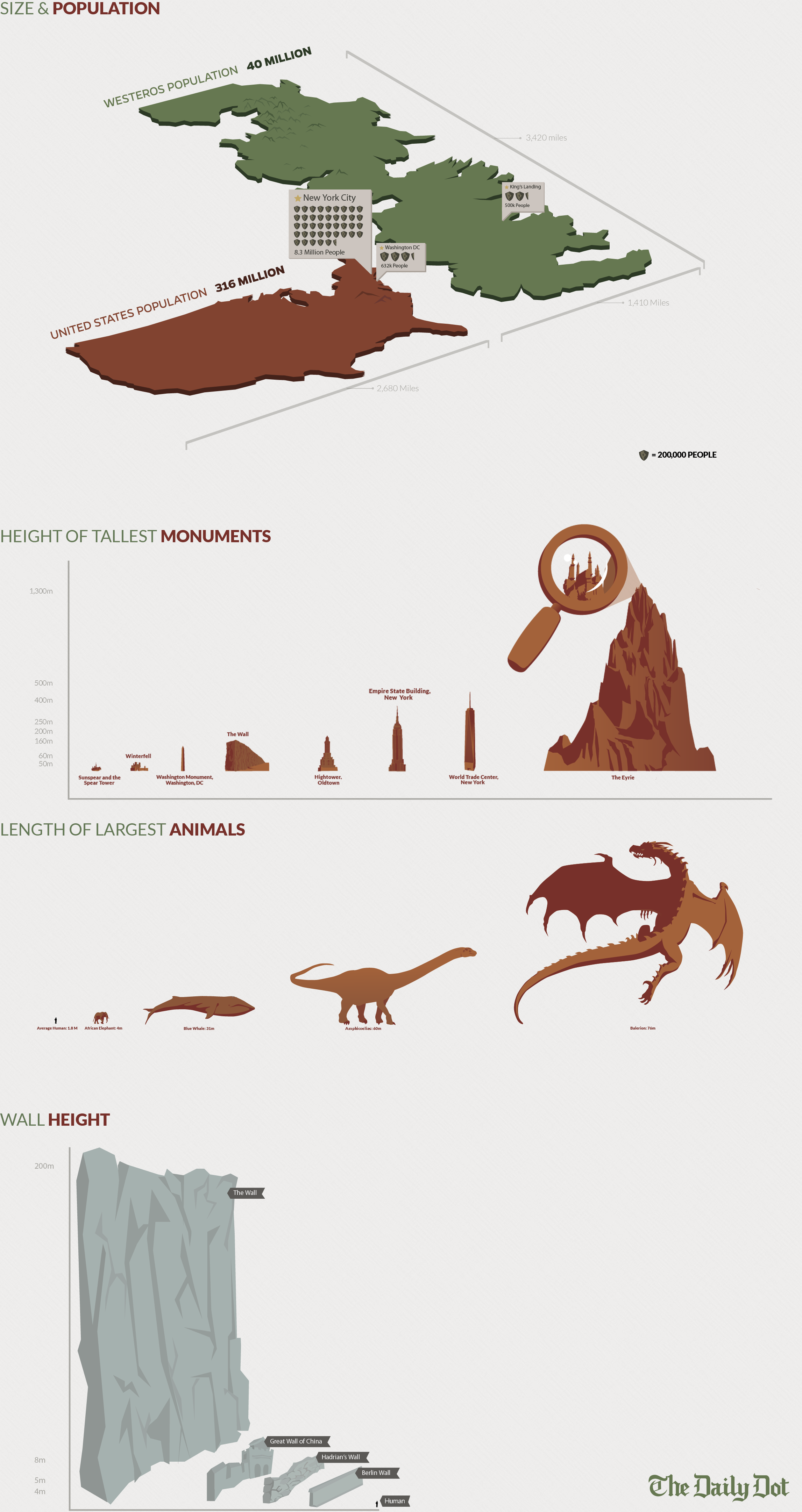 All in all, these figures help us quantify the sheer scale of Westeros, and the epic dimension of the wars playing out in the struggle for the Iron Throne.

Art and infographics by Max Fleishman and Theresa Garritano