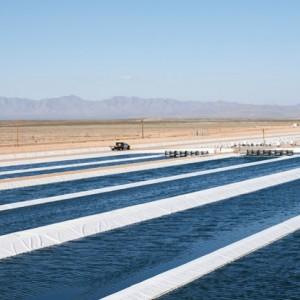 Photos by Chris Leschinsky for Forbes

Eighty miles west of El Paso, Tex., in a sunburned stretch of the New Mexico desert, Predator drones and blimps patrol the nearby border and immigration-agency SUVs speed through the desolate terrain, the occasional coyote loping across the scrub. Oddly, given that I’m more than 600 miles from the Pacific, there’s a distinct salty ocean tang wafting on the breeze. But that’s not the sea I’m smelling: The odor is emanating from algae growing in 30 acres of huge oblong ponds at Sapphire Energy’s Green Crude Farm.

Funded with $85 million from Bill Gates and other investors – plus $104 million in government cash and loan guarantees – the world’s only commercial outdoor algal biorefinery went online this summer and will eventually expand to 300 acres. The plan: extract 1.5 million gallons of green crude oil a year from patented pond scum fed a diet of carbon dioxide and sunlight.

Even before San Diego-based Sapphire broke ground on the demonstration plant last year, the U.S. Navy’s green energy warrior, Vice Admiral Philip Cullom, descended on the desert site to grill Sapphire execs on their technology and its potential to fuel battleships and jet fighters. “No question, the military has focused the company and given us a great challenge to meet,” says Sapphire executive Tim Zenk, standing on the catwalk of a tank where a mechanical arm is harvesting thick green goo pumped in from the algae ponds.

Scum ponds in the desert? The very idea conjures memories of the federal government’s decidedly mixed record at promoting alt-energy projects: Solyndra, FutureGen, A123′s electric-car batteries, synfuels in the 1980s, jojoba in the 1970s. Add to that all the many military boondoggles – Star Wars missile defense, for one – born of best intentions and bloated budgets.

Sapphire has yet to earn a dime from the Pentagon; the company’s government funding comes from the Departments of Energy and Agriculture. But since the days when the startup’s scientists were still tinkering in the lab, they’ve been sending their biofuel for evaluation to the Defense Department, the deepest-pocketed client of them all. “There’s no other entity that has the capacity, the planning, the commitment and the policy drivers to make technologies real and create a market,” says Zenk.

The U.S. military, the nation’s single largest oil consumer, wants to wean itself from petroleum, and is deploying its immense buying power and authority to commercialize nascent technologies deemed to be in the national interest.

The Navy, which aims to get half of its energy from renewable sources by 2020, has been buying biofuels in small but expensive quantities, as in four times the cost of conventional fuels. Earlier this year the Pentagon invoked the Defense Production Act to solicit proposals to build at least one integrated biorefinery with $210 million in government funding. The biofuel buy has outraged some congressional Republicans, who are attempting to bar the military from purchasing any fuel that costs more than petroleum.

It will be years before we know if the military’s biofuels bet is a multibillion-dollar folly – or if the armed forces have planted the seeds of another global industry, as it did with nuclear power, semiconductors and the Internet. This much is certain: The Pentagon’s largesse is already spurring the entrepreneurial zeal of startups like Sapphire that seek potential riches in shaping green technology to meet military needs.

For a first-hand look at that opportunity I find myself onboard a Navy C-2A Greyhound in July approaching the USS Nimitz some 45 miles off Oahu. I’m strapped into a backward-facing seat wearing a survival vest and a “cranial” – Navy-speak for a helmet equipped with sound-deadening headphones and goggles. The roar of the transport’s twin props ratchets up and an airman in the last row of the dimly lit cabin starts pumping his arm wildly. “Go! Go! Go!” That’s the signal to brace for landing. As the Greyhound drops toward the 1,100-foot deck of the aircraft carrier, the pilot throttles up to 150 miles an hour. We shoot across the tarmac until a hook embedded in the plane’s fuselage catches a cable, whiplashing us to a dead stop.