A large box of hard, white plastic roasts in the desert sun. Silvery metal and glass break up the white, but the two are wholly interchangeable— they evoke the functionality of a hospital hallway, but don't actually serve any function. Beyond its edges, there is a second box, then third, then more. Two of them are built on top of each other. One is a trapezoid. One has three doors in, another only one. This child-safe playset sprawls across the sand, and there is another just like it sitting on another desert dozens of light years away, and another further still, plopped next to a pool of something bubbling and green.

At each, there is a person with the sort of name that seems carefully crafted to remind you of the "Wild West." August Bradley. Christmas Tate. The sorts of names from which you can reverse-engineer the rules of a playground "cowboy name" game. And each of these settlers need something important from you. They stand in their too-neat rooms, look past you onto these alien worlds, and make the most mundane requests in the most serious voices: Can you please find and mark three medkits on the map? These seismic hammers really need to find a home. Have you heard about the mutated animals—there are four and you need to kill them, please.

Mass Effect: Andromeda aspires to walk the line between of the bright chrome of the original trilogy's space operatics and the dusty frontiers of space westerns like Firefly, Trigun, or the sandier moments of Star Wars. But it can't balance (let alone smoothly blend) the two, and instead, it offers an uneven combination of each: a garish settlement constructed of modular cubes that suggests no amount of "frontier struggle"; an outlaw spaceport where things always wrap up far too neatly; a mustache-twirling villain who monologues about genetic destiny—only to have his views on racial essentialism supported by the game's own text.

Over and over, I wondered why I kept playing. I didn't like this place. 70 hours later (and the credits successfully behind me) I'm still not exactly sure why I didn't quit. Andromeda needed a different hero. I never wanted to save these worlds.

Despite my skepticism during the game's lead up, I really do think Andromeda has a fantastic premise: The Andromeda Initiative is a technocratic startup that 'goes Galt, deciding to colonize the so-called frontier of the Milky Way's closest galactic neighbor—a star cluster that is already inhabited by a sovereign nation, a second colonizer, and a perplexing, dangerous collection of robots.

It's a frame for a story that could actually engage with the moral and political murkiness of the frontier fantasy, and which could offer a fresh context for the memorable character work that is a series hallmark. Beginning as an agent of an impersonal government and evolving into a semi-freelance executor of justice, Andromeda's protagonist—the "pathfinder" Ryder—is supposed to be a savvy gunslinger on an adventure. But the vast majority of my 70 hours with Andromeda felt less like adventure and more like errand. 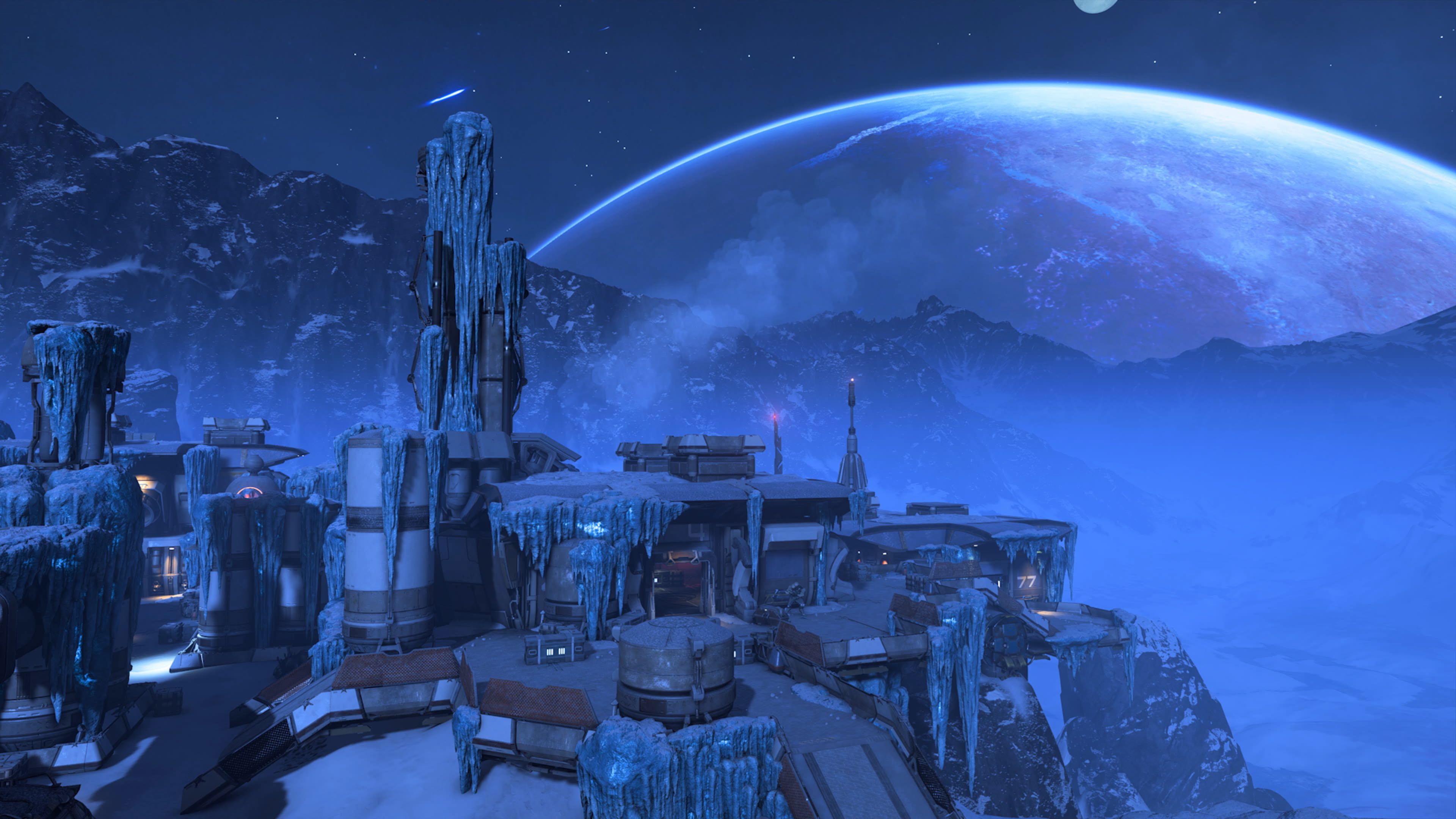 All images courtesy of Electronic Arts

What really stings is that it every few hours there is a flash of the game that Andromeda could have been. The writing is flat for five or six hours, and then suddenly, Andromeda will remember that flying to a new galaxy doesn't alleviate a culture of its baggage. These quests are the ones where inhumane bureaucracy is rendered both remarkably cruel and seemingly necessary, where the belief in truth is brought into tension with the need to maintain morale, and where (sci-fi analogy) racism is smartly pinned both on the actively hateful and on a managerial class who has more interest in preserving stability than establishing equality.

And every now and then Andromeda really is charming. Some character moments towards Andromeda's end game offered that usual BioWare feeling of warmth and camaraderie. One major sidequest nailed a string of physical comedy gags—which is a feat, given how broken the cutscenes can be. And, as Kotaku's Patricia Hernandez notes, some of the game's best writing is in its emails. (Seriously. I love Drax's emails.)

But these moments are rare. They are often dozens of hours apart, sometimes hidden behind oblique requirements, and often so fleeting as to be forgettable. A number of times I went to tell a friend about a high point from the previous night of play, but instead I could only recall another gunfight, another set of chest-high containers on the snow or dirt or sand, another boilerplate twist.

Even if Andromeda had more of these high points, though, it still would have been a challenge for me to really love. The characters of BioWare's games are a huge part of why I've been a fan for decades, but their worlds are just as important to me. And unfortunately for Andromeda, the core conceit of its setting is facile and pernicious—and worse, boring.

The planets of Andromeda's Heleus Cluster are not primed for colonization, as they were promised to be. This is a sharp hook that could've led to a setting that felt distinct from the original trilogy and that pointed to a new vibe for the whole series. But Andromeda instead decides to dull this hook: As Ryder, you are charged with finding a techno-magical solution to climate change so that you can make these inhospitable worlds perfect for people. And this vision of success runs throughout missions large and small: Whether you're out to save a town, planet, or galaxy, just flip a few switches.

It isn't just that this rankles my politics—though it does that—it's that it misses what made the first Mass Effect games so memorable: Everything had a cost. "Adepts" might be able to lift a half-dozen enemies into the air with their minds, but there were never any magic bullets to Mass Effect's difficult problems. Everything took time, resources, life, or all three. And some things were simply not "fixable"—Shepard was never going to make a sweeping fix to Quarian immune systems. The love I had for that world and those characters supplemented those difficult, memorable choices. In Andromeda, its characters are only a weak pain reliever, and its would-be-wild-west worlds rarely seem worth saving.

Over the years I've grown less in love with the space western. The corrupt and urban galactic center juxtaposed with the humble and hardworking rural frontier—it's a charged fantasy that needs to be handled just so for me to buy in. In my mind, I traced this turn in myself to the Ta-Nehisi Coates of the early 2010s, who I vaguely remember tackling this issue. I wanted to find that source, some quote about the unavoidable colonial spirit or about the unbearable whiteness of that narrative lens. But instead, I found a blogpost interested much more in the narrative shortcomings of Firefly—and his beefs with Whedon's cult classic feel familiar in the wake of Andromeda:

I consider pacing to be part of story-telling—knowing when and how much to give your audience, and gradually instilling in them a confidence that this journey, down this rabbit-hole, does lead somewhere. When it's done right, I stop worrying about the unresolved questions and watching the characters. ... I watched Mad Men and The Wire because I loved watching the characters. I just liked how Slim Charles talked, and how Betty Draper didn't. I fell for Simon's Baltimore, and Wiener's New York. They made a world that made me say, "I want to go to there," not "What happens next?"

Perhaps that's too high of a standard—but it's my personal standard for narrative. All of the characters were likeable enough, but I wasn't deeply interested in them. What I was left with was a lot of clever creepiness—black bounty hunters with Confederate names, psychics who babble incoherently, a priest who is probably not a priest—draped over the creaky architecture of a story. I felt like I could see Whedon's hand moving events, not characters with all their flaws and credits, moving events. I could see the "TV" in the TV.

And now, with Andromeda, I see the "game" in the game. There are quest objectives, not goals I want to achieve. There are "tasks," "assignments," and "loyalty missions," and while this sort of divide is not new to games (or even to Mass Effect), I've never been more aware of this subdivide. When I'm playing a game I love, that divide fades away. I'm just out to do cool shit. In Andromeda's story, I almost never did cool shit. I just moved forward.

When Mass Effect launched in 2007, it felt like both the next level of video game storytelling and an admonishment of what came before. It drew most obviously on the visual and auditory conventions of sci-fi cinema and television: the driving, Vangelis-inspired synths on Eden Prime; the taut corporate aesthetics of Alien on Noveria and Virmire; the (at the time) revolutionary polish of a simple dedication to shot-reverse shot in so many dialog trees. It also drew on a deep history of sci-fi, horror, and other genre stories across media. Some missions mimic the tight structure the of the TV procedural, while others work like short stories, invoking some idea or question without insisting on a clean, 21-minute resolution.

It also used that particular-to-games feeling of embodiment to move beyond the cutscenes and codex entries. It built its world in the margins. Overheard conversations, radio advertisements, and enemy barks offered insight into places where a space cop had no reason to go. This became a series staple—just ask a Mass Effect fan about Blasto, the first Hanar Spectre, or about whether or not that human at the Citadel shops ever got the return he was looking for.

There aren't any memorable ads on the exile outpost of Kadara. There are abstract neon signs, a few shops where you can buy an array of weapons, a bar that never feels busy enough. And occasionally there is some dry conversation to hear. "Another dead body," says a guy. "Do you think it's th-," but he's cut off because you've walked too close to another NPC, who is extolling the virtues of the port's lead gang—who a vast majority of the missions will introduce you to anyway. There are no margins on Kadara. There is no world beyond the one where you shoot and scan mutated creatures.

Today, shot-reverse shot is increasingly standard, and the narrative frontier that the original Mass Effect games explored are known territory. There are new exploration in game storytelling, large and small: Brendon Chung's use of montage in Quadrilateral Cowboy, 30 Flights of Loving, and Gravity Bone; the memorable melancholy of 80 Days; the unapologetically aesthetics-first agency of Kentucky Route Zero; the procedural cultures of Ultima Ratio Regum .

Maybe, if Andromeda had been a more focused, tightly paced experience—30 hours instead of 70—my fondness for the characters would have overridden my thematic hang-ups. But as it stands, I can only say that Andromeda did not earn me. I gave myself to it out of a mix of misplaced obligation and hope.

I'm not confident that some new patch can fix the issues I have with Andromeda. They're too fundamental, too structural. But I can't shake that hope for the future of the series. My own failures have taught me a lot, they've been catalyzing agents for improvement. So I look forward to whatever is next (and I do think there will be a "next" for Mass Effect). But my sense of obligation may finally be broken. The universe of games is vast, and like the first few Mass Effect games, is filled with so many worlds. They are imperfect, but bright; small, but ambitious. They deserve to be explored.

(Disclosure: Ultima Ratio Regum developer Mark R. Johnson has written for Waypoint in the past.)