BY LEE DRUTMAN and ZANDER FURNAS

With the Federal Communications Commission's (FCC) decision to move forward with a controversial proposal that threatens net neutrality and the open Internet, lobbying activity looks like it has reached a fevered pitch. But for the companies involved—especially the telecom companies that are eager to be allowed to charge more for a "fast lane" of Internet service—lobbying has been at a fevered pitch for almost a decade.

When we arrange the top-20 net neutrality lobbying organizations by amount of reports on the issue (Figure 1), the disparity is clear. The five most active organizations on the issue since 2005—Verizon, AT&T, Comcast, the National Cable and Telecommunications Association and the National Music Publishers Association—are all opposed to neutrality. Verizon and AT&T are heads and shoulders above everyone else, each with an estimated 119 reports mentioning net neutrality.


Not only does the anti-net neutrality faction devote more lobbying attention to the issue, but these top organizations also consistently have a much larger lobbying footprint. Figure 2, below, looks at the money that the top pro- and anti-neutrality organizations have spent lobbying since 2003. Consistently, the anti-neutrality groups have outspent the pro-neutrality groups by a margin of more than 5-to-1, although this has narrowed to closer to 3-to-1 in recent years as Google Inc. has increased its lobbying presence.


Of the five organizations with vested interests in this issue that spent the most money in 2012 (the last year for which we have complete data), four oppose neutrality. All five, though, spent impressive sums. 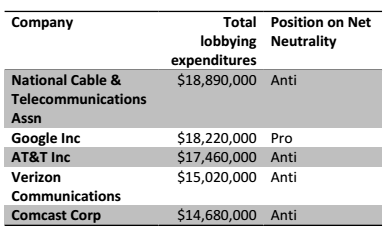 While the dispute over network neutrality is often thought of as a battle between giant corporations, it's clear from the data that over the lifespan of this issue, the pressure has been far from equal. The leading opponents of neutrality (largely the Internet service providers) have devoted significantly more resources to lobbying than the leading supporters of net neutrality (largely the big tech companies). While the tech companies have been expanded their lobbying presence recently, they are still playing catch-up. The big telecom companies have spent years convincing key decision-makers. We will see soon whether all their intense lobbying has paid off.

Lee Drutman and Zander Furnas are fellows at the Sunlight Foundation, a nonpartisan nonprofit that advocates for open government globally and uses technology to make government more accountable to all.

We determined companies' positions on net neutrality based on whether the companies CEOs had signed on to relevant letters to the FCC. If this information was not available, we assessed other public statements of position released by the corporation/organization or its officers. The Christian Coalition has a public statement in defense of net neutrality on its website, as does Dish Network. The most difficult to classify in our top 20 list was Apollo Investment Management. Largely, lobbying on net neutrality by Apollo has been on behalf of its subsidiary, Hughes Network Systems, a satellite broadband provider. A February 2010 trade publication on the Hughes website argues that a pro net neutrality FCC is good for the satellite broadband industry as it "should tend to level the playing field […] by preventing larger terrestrial providers from entering into preferential deals with content providers."

Cisco has an anti-net neutrality statement on its site. Corporate officers at Tekelec have spoken publicly in favor of network management, and against net neutrality, especially in the mobile broadband market, on multiple occasions. The National Music Publishers Association has argued for a non-net neutral approach that will require ISPs to engage in network management to block or throttle traffic that violates copyright.

All dollar amounts are shown in inflation-adjusted 2012 dollars.