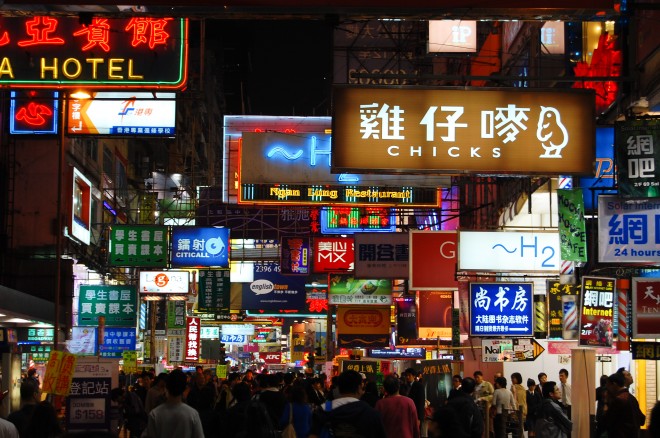 Would you kill one person to save five?

This cruel dilemma pits the principle of thou-shalt-not-kill against simple math: Five is greater than one. But presumably it's a dilemma each person solves the same way each time, unaffected by superficial things like the language in which it's presented. After all, we like to think we abide by a consistent moral code.

Yet psychologists say that's not always the case. In a series of experiments, they found that people confronted with this one-for-five dilemma were far more likely to make a utilitarian choice when contemplating it in a foreign language.

"We tend to think about our ethical decisions as reflecting something fundamental about who we are," said psychologist Boaz Keysar of the University of Chicago, co-author of the new study, published April 23 in Public Library of Science ONE. "You wouldn't think they would depend on such a seemingly irrelevant thing as whether you're using your native language. But it can matter."

The findings fit into a growing body of research that casts decision-making as involving the interplay of competing psychological mechanisms: one that's instinctive and emotional, and another that's deliberative and calculating.

Two years ago, researchers led by Keysar found that people thinking in a second language tended to be more even-headed about risk-taking. A certain lack of fluency seemed to encourage deliberation, dampening emotional reactions to the idea of loss.

In the new study, they turned their decision to moral choices, and in particular a variation of classic thought experiment called the trolley problem. In the original formulation, test-takers are asked to imagine a runaway trolley headed toward five people tied to its tracks. Is it better to throw a switch that diverts the trolley onto another track, where it will only run over one person, rather than killing five?

In the formulation used by Kesyar, that dilemma is made more visceral: Subjects are asked whether they'd push a man off a bridge and onto the tracks to stop the trolley. That's a choice heavily influenced by emotions. People who say they'd make the utilitarian decision to throw the switch often balk at the footbridge. If language indeed affects emotional processing, reasoned Keysar and colleagues, it should influence this decision. 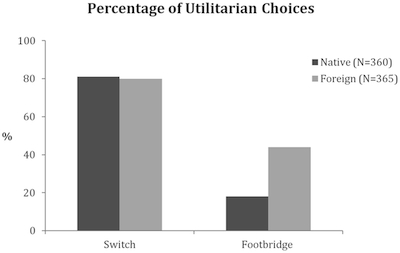 Utilitarian decision-making in the trolley (left) and footbridge (right) dilemmas, varying by its presentation in a native (dark gray) or second (light gray) language. Image: Costa et al./PLoS ONE

That's precisely what they found. Among 317 male and female students—people who spoke English as a first language and Spanish as a second, as well as Korean/English, English/French and English/Hebrew speakers—20 percent made the utilitarian decision when they read the dilemma in their native tongue, but the number jumped to 33 percent when they read it in a second language.

"People react viscerally to the notion of using someone as a tool to save others," said Keysar. "And when you consider the difference in a foreign language, you have a less-visceral reaction."

Study co-author Albert Costa, a cognitive scientist at Spain's Pompeu Fabra University, ran the same experiment independently of Keysar—they decided to co-publish after learning of each other's work—with 725 students who spoke English and Spanish, and found an even more pronounced effect. A full 44 percent of students would push a man to his death when asked in a foreign language, compared to just 18 percent in their native language.

The social sciences sometimes have been criticized for hyping findings that couldn't be replicated later, but this study is solid, said Fiery Cushman, a Brown University psychologist who specializes in moral decisions and was not involved in the study. That the effects were so robust, and found independently in two large groups of people, suggests they're real.

Cushman framed the study as a window into decision-making dynamics. A question going forward, he said, is whether these language effects reflect something deeper about the approaches people take to making moral judgements in more ordinary circumstances.

The researchers still don't know exactly why test-takers reacted this way. Something about thinking in a second language may have reduced emotional arousal, or perhaps the challenge of communicating in a less-familiar language encouraged more deliberation.

'Our native tongue is the one in which our emotions are first shaped. Its words simply have a more emotional association.'

"At this point we can only speculate," said Keysar. But another experiment in the study seems more consistent with the emotion-reducing interpretation. Costa's group presented students with the classic, switch-flipping trolley dilemma. Regardless of language, their choices were nearly identical. If a foreign language promoted deliberation, more students would have been expected to make the calculated utilitarian choice.

Cathleen Caldwell-Harris, a Boston University psychologist who specializes in bilingualism and is currently conducting her own study of decision-making, noted that both anecdotal evidence and previous research supports the idea that second languages tend to have less emotional resonance.

Some studies have found that swear words in a foreign language seem less offensive, and emotionally-charged phrases evoke less physiological arousal. People in therapy sometimes report using a foreign language when they want to keep a deliberative distance, said Caldwell-Harris, and switch to their first tongue when engaging emotionally.

It doesn't matter what that language is, said Caldwell-Harris: It's a consequence of how we learn. Our native tongue is the one in which our emotions are first shaped, in which we typically have our first interactions and arguments and loves. Its words simply have a lot more emotional association. And as we become truly fluent in another language, she says, then eventually it will become more emotional, too.

A more fine-grained analysis of the new findings seems to support that interpretation. People who were highly skilled in their second language were less likely to choose the push-a-man-off-the-footbridge utilitarian option than those who were less-fluent. Still, Keysar cautioned against jumping to conclusions.

It also remains to be seen how this effect might play out in other types of moral decisions, or in different situations, says Sayuri Hayakawa, another University of Chicago psychologist and study co-author. "How does it affect legal decision-making? Or medical?"

For the time being, said Keysar, a useful takeaway could simply be heightened self-awareness. "It's really important that, even if people don't know exactly what to expect from using a foreign language, they realize that it can affect their decisions," he said.