Nicole He is an artist who works with technology, and you may know her from her previous work: Soylent Dick, for example, a phallus made out of Soylent that squirts liquid Soylent into a cup when the user types self-validating praise into a browser; or the Unfamiliar Cat-Petting Simulator, a game that simulates the challenge of petting someone else's cat using a joystick and fur pad.

Her new project — which also happens to be her master's thesis for the Interactive Telecommunications Program at NYU — is a culmination of all her work until now. Previously, she programmed computers to output art. Now, she's letting the computer program her.

"The human receives the computer's instructions in the form of a printed receipt," the website explains. "The human then executes the commands, outputting the best art and fulfilling the computer's artistic vision."

The project, which He calls The Best Art, uses a computer to generate art ideas which He will interpret and then execute. The first prompt, generated on March 6, said: "Build three photocopied, type-written pages in opposition to trucks." So He wrote a series of negative sentences about trucks and printed them out. Next the computer asked her to "Design a toilet paper tube that evokes a bent beech wood," so she cut up a toilet paper tube so it resembled branches.

Her favorite piece of computer-directed art so far was "Make everyone feel lonely," which she interpreted as a slideshow of stock images of families set to different computer voices saying, "You are alone. You are alone." 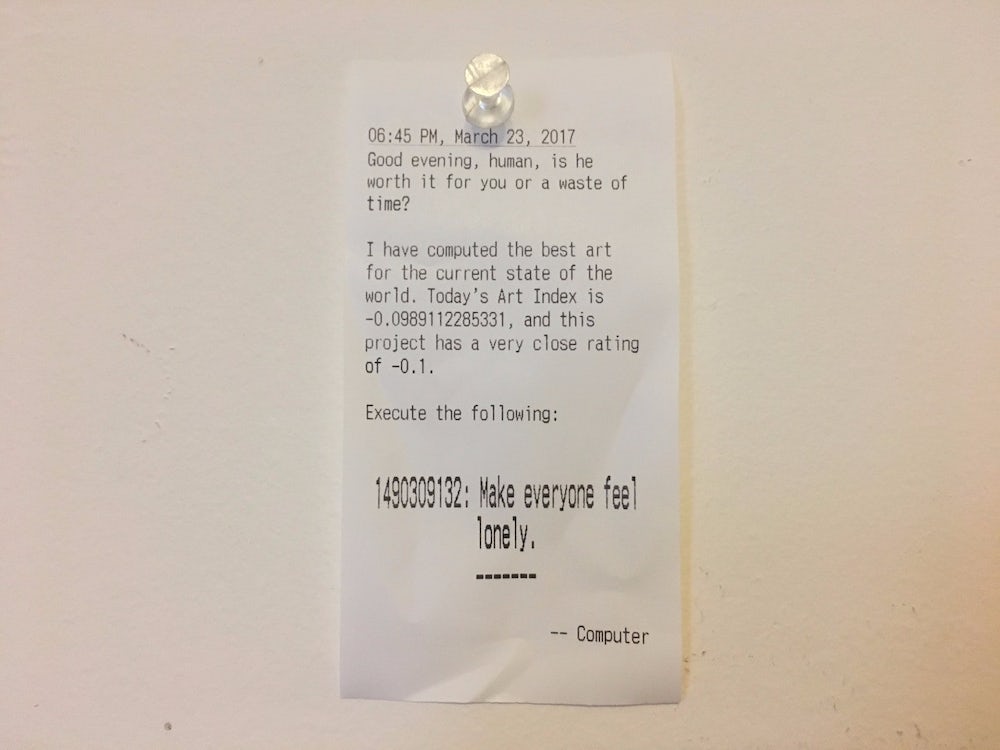 A prompt from The Best Art algorithm. Nicole He

The project is basically three parts: a bank of words that are combined to form the computer's art ideas ("Make everyone feel lonely"), an algorithm that computes a number (the "Art Index") in order to select which art idea is "the best art" for the moment, and He's interpretation of what the computer asks for. She will be completing the artistic tasks assigned by the computer until the end of the semester, when she presents her thesis. "I just want to mention that I'm graduating in May and looking for a job as a programmer and/or creative technologist," she wrote in an email, "in case you wanted to put that in."

He's output for the "Make everyone lonely" prompt.

She drew the words that make up the prompts from a variety of sources including museum materials, Kickstarter projects, Instructables projects, things from the US patent database, and headlines, then used natural language processing techniques to ensure that the computer would come up with cogent sentences. Next, she designed the Art Index algorithm to generate a number based on the weather, time of day, how many times the president has tweeted recently, how close the International Space Station is to the computer, and the computer's horoscope (it's a Gemini). She's now started the performance phase, which means executing the art projects that the computer comes up with.

"A lot of my work uses technology to talk about technology," she said in an email. "I'm particularly interested in the disconnect between the promises made by Silicon Valley and the reality of how well these tools work. For this project, it's also specifically about the relationship of humans and computers, and who is ultimately responsible for the output of algorithms." 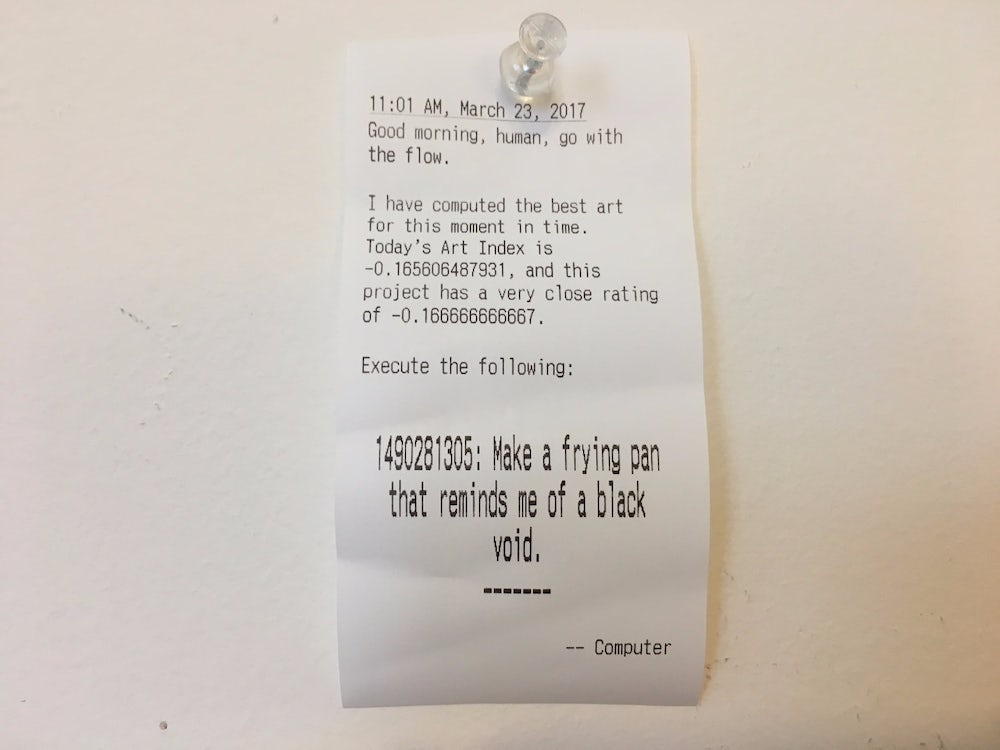 A prompt from The Best Art algorithm. Nicole He

In the FAQ for The Best Art, He winkingly points to the fallacy that algorithms are unbiased. "Good art pulls meaning from the chaos of the universe, and also reflects the artist's unique point of view. The computer rigorously combines these two factors in its programming, optimizing them to produce the best art. Rest assured that the results are objective, because they are determined mathematically via algorithm."

Of course, ultimately, every algorithm carries the bias of the humans who designed it. He made the same point with her project True Love Tinder Robot, which swipes through Tinder based on readings from sensors on the users' hands, exploring "the idea that the computer knows us better than we know ourselves." In other words: Even though algorithms are made of math, you should still be skeptical of them.

The art created by Nicole He in response to her computer's prompt, "Make a frying pan that reminds me of a black void." Nicole He

At the same time, He was influenced by the personality of GLaDOS, the charming but increasingly malicious artificial intelligence from the video game series Portal. He's artist computer has a similar genial but demanding tone, like a threatening butler ("Good afternoon, human, moderate rain today.")

"I've always found the GLaDOS-style representation of AI to be really charming, which is probably why I keep writing a version of that type of character in my own work," she said. "We often wonder, for example, what our pets think about us, so I don't think it's too much of a stretch to imagine the same about our computers."

At the same time, she wanted to show the ways that computers control us as much as we control them. "Your news feed, the ads you see, etc., are subtly and already telling you what to do," Nancy Hechinger, He's adviser, said in an email. "This projects puts that front and center."