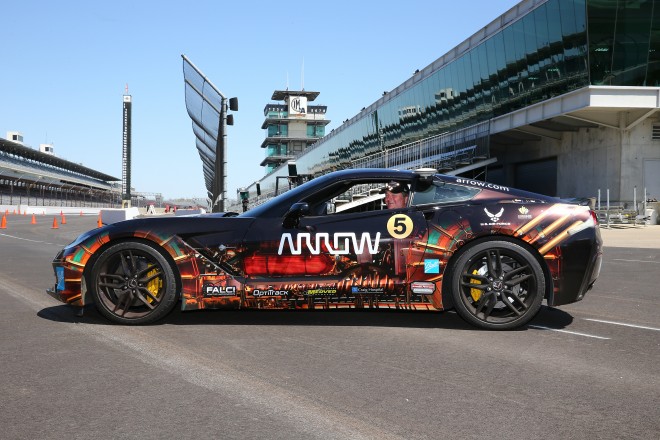 Image: Courtesy of the SAM Project

Sam Schmidt, who has been paralyzed below the shoulders since slamming into a wall 14 years ago, always believed he'd never drive again. On Sunday, he will–in a Corvette he will control by shaking his head and gnashing his teeth.

Schmidt was a promising driver with 27 Indy Racing League starts when he went into the wall at Walt Disney World Speedway in Orlando, Florida on January 6, 2000. He knew he'd never race again, but one year later he returned to motorsports with his own team, now known as Schmidt Peterson Motorsports. He's enjoyed a measure of success as a team owner, but driving seemed out of the question.

Until seven months ago, when the folks at Arrow Electronics called to ask if he'd like to get behind the wheel again. Schmidt said he signed on "without hesitation."

Arrow Electronics, which does work in medical, and consumer electronics, among other fields, had some experience with getting paralyzed drivers on the road again. Last year, the company built a Chevrolet Corvette that paraplegic former pro driver Mike Bauer could drive using only hand controls. That got them thinking about what it would take to get a quadriplegic driving, said Chakib Loucif, Arrow's VP of engineering.

Image: Courtesy of the SAM Project

For the Semi-Autonomous Motorcar (SAM) Project, Arrow– joined by Ball Aerospace & Technologies Corp., Falci Adaptive Motorsports, and the Air Force Research Laboratory, which will monitor Schmidt's biometrics and interaction with the guidance systems as he drives–spent 11 months making a few changes to a 2014 Corvette Stingray packing 460 horsepower.

Four infrared cameras mounted in the cabin track when Schmidt, wearing an ordinary ball cap adorned with small reflective balls, moves his head. He tilts his head left or right to steer, and tilts it backward to accelerate. To brake, he bites down, triggering a pressure sensor in his mouth. Within milliseconds, those signals are verified (to ensure they were intentional, not the result of, say, a sneeze), and transferred to a computer that controls the rotary actuators that turn the steering wheel and engage the pedals.

For extra help, a GPS unit near the rear of the car checks the car's location 100 times per second and warns Schmidt if he's less than one meter from the edge of the track.

None of the hardware in the car is new, but they're being used in a novel way, Loucif said. "The integration of technology to solve this problem, that is absolutely new," he said. That is "what makes this very very unique."

We know the system works, because Schmidt has completed 25 laps–a total of 75 miles–after having tried it out in a simulator. He says driving with his head "felt pretty natural."

Schmidt will drive on the track at the Indianapolis Motor Speedway during Pole Day, a week before the Indy 500. Just how many laps he does and at what speed remain to be seen, Loucif said. A backup driver with his own controls will ride alongside Schmidt in case anything goes wrong, and the pit crew can shut the car down remotely if necessary.

Schmidt expected his first drive in the SAM car to be exciting, but said it felt totally "normal," something "people do every day."

Beyond getting one man back on a track, Loucif said the SAM Project could one day improve mobility for those with paralysis and other injuries. He can see such a system being applied to home and workplace automation and elsewhere so people can "regain their freedom."

That remains to be seen, of course, but there is reason to be cautiously optimistic. Mike Collins, who writes a column about driving for New Mobility magazine, said the project has "obviously got some utility" but "I do always take these developments with a grain of salt until they're out on the market and have really been tested."

Moving a prototype technology to the commercial stage takes a lot of complexity and a lot of faith, he said, in part because there aren't a lot of backers to finance the work. And the vehicles outfitted with such technology often aren't affordable to people with disabilities.

Still, the idea of seeing Schmidt circle a track again is exciting, and, as Schmidt said, revolutionizing.