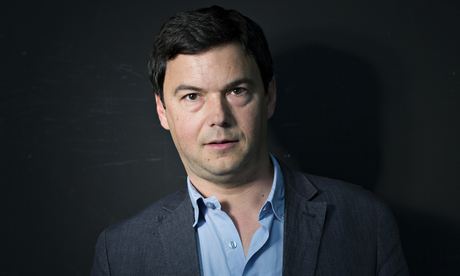 The FT accused Thomas Piketty (above) of errors in transcribing numbers, as well as cherry-picking data or not using original sources. Photograph: Graeme Robertson for the Guardian

Thomas Piketty has accused the Financial Times of ridiculous and dishonest criticism of his economics book on inequality that has become a publishing sensation.

The French economist, whose 577-page tome Capital in the Twenty-First Century has become an unlikely must-read for business leaders and politicians alike, said it was ridiculous to suggest that his central thesis on rising inequality was incorrect.

The controversy blew up when the FT accused Piketty of errors in transcribing numbers, as well as cherry-picking data or not using original sources. The newspaper concluded there was little evidence in Piketty's original sources to bear out his theory that the richest were accumulating more wealth, widening the gap between the haves and the have-nots in Europe and the United States.

In an interview with the Agence-France Presse news agency, the economist said: "The FT is being ridiculous because all of its contemporaries recognise that the biggest fortunes have grown faster."

While the available data was "imperfect", it did not undermine his central argument about widening inequality, he said. "Where the Financial Times is being dishonest is to suggest that this changes things in the conclusions I make, when in fact it changes nothing. More recent studies only support my conclusions, by using different sources."

Writing to the FT before the AFP interview, Piketty said he had put all his data online to encourage an open and transparent debate. "I have no doubt that my historical data series can be improved and will be improved in the future … But I would be very surprised if any of the substantive conclusion about the long-run evolution of wealth distributions was much affected by these improvements."

In his book Piketty draws on data spanning two centuries and 20 countries to show how the western world is reverting to levels of inequality last seen during the Belle Epoque period of 1871-1914. The findings have won him an audience with Barack Obama's economic advisers and a spot on the Amazon bestseller lists on both sides of the Atlantic.

While claims against Piketty have garnered much gloating on Twitter, he has won support from the Nobel prize-winning economist Paul Krugman. "Anyone imagining that the whole notion of rising wealth inequality has been refuted is almost surely going to be disappointed," Krugman wrote on his New York Times blog.

Along with other economists, Krugman has said there was plenty of evidence of widening inequality from sources beyond Piketty.

Scott Winship, an economist at the right-leaning Manhattan Institute for Policy Research, and notable critic of Piketty's analysis, said the FT's allegations weren't "significant for the fundamental question of whether Piketty's thesis is right or not". In an email to Bloomberg news agency, he wrote: "It's hard to think Piketty did something unethical when he put it up there for people like me to delve into his figures and find something that looks sketchy … Piketty has been as good or better than anyone at both making all his data available and documenting what he does generally."