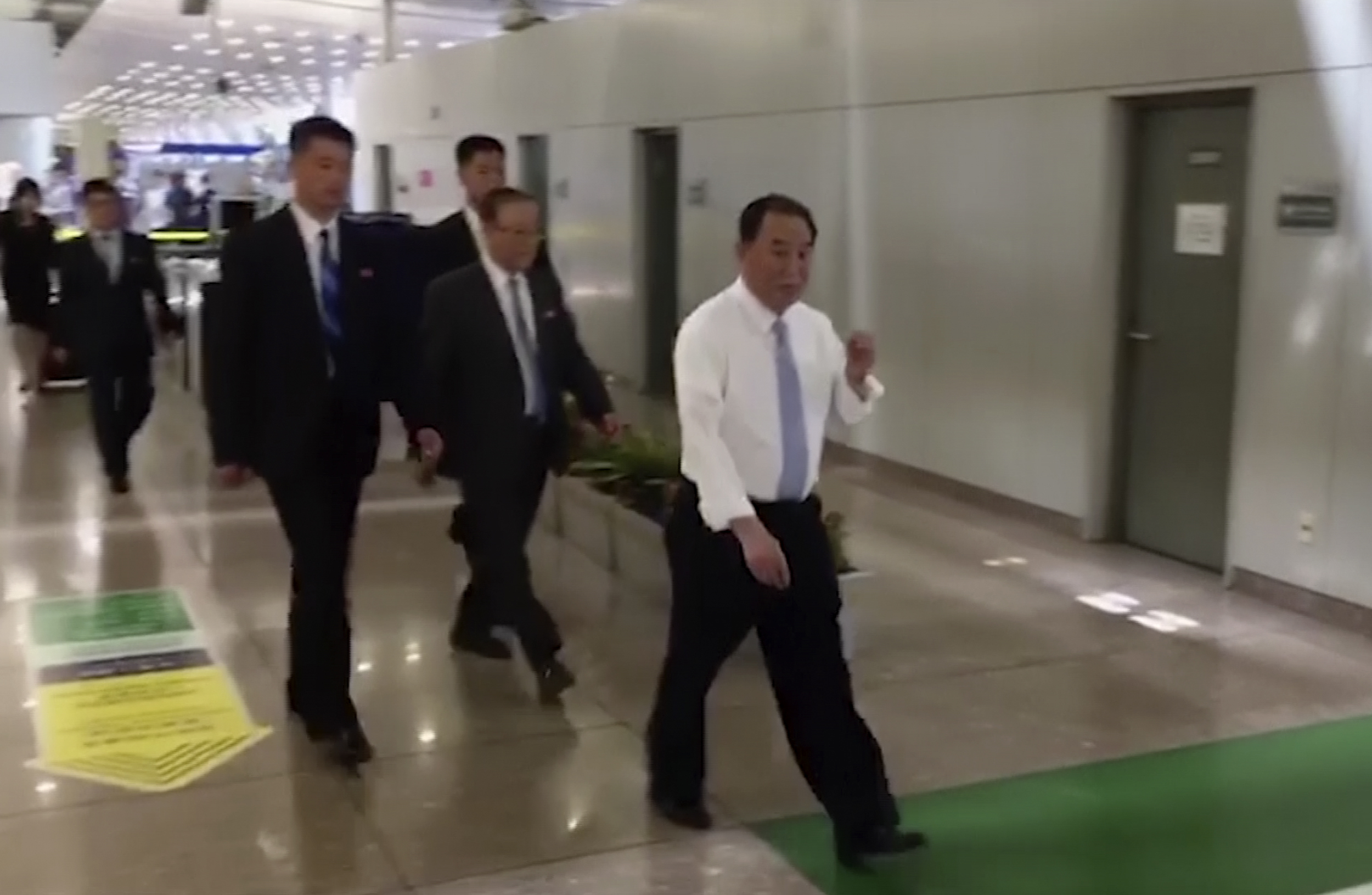 In this image made from video, Kim Yong Chol, in white, walks upon arriving at Beijing's airport on Tuesday. (AP)

TOKYO —  A top North Korean official is on his way to United States for talks about a landmark summit between Kim Jong Un and President Trump, as efforts to the make the meeting happen go into overdrive.

Kim Yong Chol, a four-star general who has been at the forefront of North Korea's diplomatic outreach, landed at Beijing Capital International Airport on Tuesday, according to television footage from the airport.

He was initially booked on an Air China flight to Washington but changed it to a Wednesday flight bound for New York, South Korea's Yonhap News Agency reported. That would have him arriving at John F. Kennedy International Airport shortly after 2 p.m. Wednesday.

Trump confirmed that he was on his way to New York.

"We have put a great team together for our talks with North Korea," the president tweeted Tuesday morning. "Meetings are currently taking place concerning Summit, and more. Kim Young Chol, the Vice Chairman of North Korea, heading now to New York. Solid response to my letter, thank you!"

Kim Yong Chol is one of the vice chairmen of the Workers' Party of Korea, the communist organization through which the ruling family controls North Korea, but is not technically the No. 2 behind Kim Jong Un.

He has, however, emerged as one of the leader's closest aides and has been at all the talks this year that have led to the current rapprochement.

He will be the highest-ranking North Korean to visit the United States since Gen. Jo Myong Rok went to the White House to see President Bill Clinton in 2000, part of a denuclearization effort that went nowhere.

There had been speculation that Kim, who greeted Secretary of State Mike Pompeo in Pyongyang this month, would be traveling to the United States amid frenzied talks aimed at salvaging the summit, scheduled to be held in Singapore on June 12.

While Pompeo is based in Washington, the North Korean diplomats accredited to the United Nations are based in New York and are not allowed to travel outside the city without special dispensation, making it the easiest place for meetings to be held.

Although Trump has not officially announced that the summit, which he abruptly canceled on Thursday, is back on, his staff is acting as though it is.

During a television interview in Washington on Tuesday, White House counselor Kellyanne Conway said that if the summit does not take place on June 12, it could be held shortly afterward.

"Let's see what happens, as the president says," Conway said during an appearance on "Fox & Friends" on Fox News. "If he's satisfied, it will go forward."

She credited a letter from Trump last week announcing the cancellation of the summit for creating the "kinetic energy" needed to get the parties talking more seriously.

A team led by Sung Kim, a former American negotiator with North Korea who currently serves as ambassador to the Philippines,was due to hold another round of talks Tuesday on the northern side of the demilitarized zone that separates the two Koreas. Officials began discussing the substance of any summit agreement, focusing on the thorny issue of denuclearization, with a North Korean team led by Vice Foreign Minister Choe Son Hui on Sunday.

Separately, an advance team headed by White House Deputy Chief of Staff Joe Hagin is in Singapore making logistical plans for the summit, should it go ahead. The North Korean side is led by Kim Chang Son, who effectively serves as chief of staff to Kim Jong Un.

Kim Chang Son was seen at Beijing airport Tuesday and, asked by Japanese reporters if he was heading to Singapore for talks with U.S. officials, he said he was "going there to play."

Now, it appears that Pompeo is getting ready for another round of discussions with Kim Yong Chol. Both are former spy chiefs and met in Pyongyang during the secretary of state's visits there in April and again this month.

Kim Yong Chol was directly sanctioned by the Treasury Department for his involvement in North Korea's nuclear program and illicit activities while he served as director of intelligence, so the United States would have had to grant a waiver to allow him to enter the country.

He now serves as head of the United Front Department, the arm of the ruling Workers' Party that handles relations with South Korea. In this role, he traveled to the South in February during the Winter Olympics, which provided the springboard for the current diplomatic frenzy, and was prominent during an inter-Korean summit on April 27.

He is widely believed to have masterminded the attack on a South Korean naval corvette, the Cheonan, in 2010, leading to the deaths of 46 sailors.

As the rapprochement with the United States has picked up pace, Kim Yong Chol appears to have taken on a broader remit to deal with the Trump administration.

He holds a number of senior positions within North Korea's communist hierarchy. He is a member of the Workers' Party Politburo and the powerful State Affairs Commission, and he also serves on the presidium of the Supreme People's Assembly.

"This combination of positions in the party and state makes Kim one of the most powerful figures in North Korea," according to North Korea Leadership Watch, a website that tracks senior regime figures."

John Wagner in Washington contributed to this report.