President Trump, who departed early from a contentious G-7 meeting in Canada, has said he does not need to prepare for the two-day summit meeting in Singapore with Kim Jong-un.CreditDoug Mills/The New York Times

With the nuclear future of North Korea and the security of the entire region at stake, the encounter will be the first ever between a sitting American president and a North Korean leader.

Just over two weeks ago, it seemed that the summit meeting was not going to happen. A few months ago, the two countries even seemed close to the brink of war.

But on Sunday, Mr. Trump arrived just after 8:20 p.m. local time at Paya Lebar Air Base in Singapore aboard Air Force One, a few hours after Mr. Kim landed at Changi Airport on a commercial Air China plane.

Mr. Trump, who has declared that he did not need to prepare for the two-day meeting, will pit his negotiating skills against the leader of one of the world's most isolated countries. Some analysts fear it will be a meeting of mismatched expectations, with Mr. Trump expecting denuclearization from North Korea in return for helping the impoverished nation improve its economy.

Mr. Trump has questioned the need for a strong American military presence in Northeast Asia. Most analysts do not believe that Mr. Kim is prepared to give up his weapons. 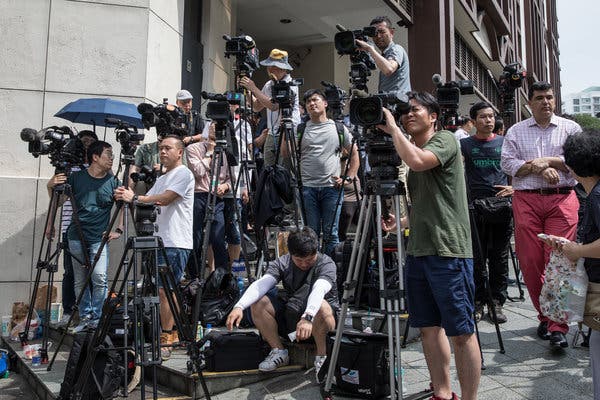 Media waiting at the entrance of the St Regis Hotel before the arrival of North Korean leader Kim Jong-un.CreditChris Mcgrath/Getty Images

But as part of his trust-building steps to get the United States to the table, Mr. Kim appeared to blow up his country's nuclear test site, in Punggye-ri in northeastern North Korea, in May, and said he would put a moratorium on long-range missile tests.

Mr. Trump flew straight from the Group of 7 meeting in Canada, where he had cut short his attendance and then refused to join a joint statement with the allies, threatening to ratchet up his trade war and calling the prime minister of Canada, one of America's closest neighbors and allies, "very dishonest and weak."

This is the farthest Mr. Kim has traveled since taking power in 2011. He arrives after making a striking transformation from what many saw as a despotic, impulsive young leader with a nuclear arsenal to a skilled diplomat who lured South Korea and the United States into negotiations by dangling the possibility of denuclearization.

The North Korean leader and Mr. Trump are scheduled to meet at 9 a.m. on Tuesday, after a dramatic two-week run-up during which Mr. Trump declared that the summit meeting was off and then on again. It was resuscitated at the last minute.

Earlier Sunday, reporters scrambled to track three planes headed from Pyongyang, the North Korean capital, to Singapore. Mr. Kim landed a little after 2:30 p.m. and was greeted at the airport by Singapore's foreign minister, Vivian Balakrishnan.

Mr. Balakrishnan confirmed the arrival in a Twitter post that included a photo of his welcoming Mr. Kim. The foreign minister also greeted Mr. Trump when the president arrived at the air base.

North Korea's leader, Kim Jong-un, arriving in Singapore on Sunday for a summit meeting with President Trump.CreditSingapore's Ministry of Communications and Information, via Reuters

The international news media have descended on Singapore, with the United States, Japan and South Korea sending the most journalists. According to Singapore's Ministry of Communications, about 2,500 journalists have registered to cover the meeting.

A contingent of reporters spent the steaming hot day staking out the St. Regis Hotel, where Mr. Kim's motorcade arrived shortly after 3:30 p.m. with North Korean flags flapping on the front hoods of Mercedes-Benz stretch cars. Traffic was snarled along roads leading to and from the hotel.

The summit meeting will be held at the Capella Resort on Sentosa Island, a popular recreation spot off the southern tip of Singapore.

Although there were nowhere near royal-wedding-level crowds, curious onlookers joined camera crews and journalists on the road outside the St. Regis to watch Mr. Kim's motorcade depart for a meeting with the prime minister of Singapore, Lee Hsien Loong.

"It is a big thing for Singapore," said Patrick Han, 29, an energy research analyst who came out with his mother to wait near the St. Regis on Sunday afternoon. But after seeing how Mr. Trump had alienated allies at the G-7 meeting, Mr. Han said, "I am not really hopeful that a single summit will have tangible results."

Ruairi Gogan, an American who has lived in Singapore for 20 years, began tracking Mr. Kim's flight on flightradar24.com on Saturday.

"He is like Dr. Evil," Mr. Gogan quipped while waiting near the St. Regis, though he added that the summit meeting "might be a good thing."

The St. Regis is less than half a mile from the Shangri La Hotel, where Mr. Trump is staying. But while the Shangri La is set on a residential stretch of road, the St. Regis sits on a busy commercial boulevard next to a run-down strip mall with two money changers, a pet store and "Maids R Us," a hiring agency.

There were road cordons and a heavy police presence outside the St. Regis, although officers took a gentle approach when urging those who had gathered outside the hotel with smartphones and video cameras to move back from the wire barricades.

Outside the Shangri La, about two hours before Mr. Trump was scheduled to land, the road was deserted except for a few bystanders.

Stanley Peck, 49, a doctor who lives nearby and was finishing up an evening run, stopped to snap a photo of a large sign with a silhouette of a machine-gun-toting police officer just outside the entrance to the hotel. "Police checks comply with orders," the sign read.

"It is interesting to know that a small country like ours can have these two big boxers coming in for a fight," Mr. Peck said. "We are proud to host something like this."

A security tent at the entrance to the Shangri La Hotel in Singapore.CreditYong Teck Lim/Associated Press

Given that just two weeks ago the summit meeting had been canceled, Mr. Peck said, the prospects for the meeting had already "come a long way." He added, "At least they are here and at least they get to shake hands. Hopefully."

Across the city, Singapore has tightened security for the long-awaited meeting. According to Kasiviswanathan Shanmugam, Singapore's minister for home affairs, about 5,000 police officers and emergency responders are on duty throughout the events.

Already, he said, one traveler from a "regional country" was turned away at the airport on Saturday. Immigration and customs officers had stopped the man after determining that he was "behaving very nervously," Mr. Shanmugam said.

"He couldn't answer their questions," Mr. Shanmugam said at a news briefing on Sunday. "They checked his mobile phone and saw that he's been checking through and visiting sites on suicide bombings, and they made an assessment" that he should be barred from entering Singapore.

Mr. Shanmugam said "two or three" other individuals had also been barred from entering the country in recent days.

At the international media center, at Singapore's Formula One Racing Center, journalists gathered in a building overlooking a racetrack to wait for the arrival of Mr. Kim and Mr. Trump.

Some locals were capitalizing on the attention. In a dining hall set up for reporters, the Common Good Company, a consortium of Singaporean food businesses, gave away ice cream in flavors like Kimchi (in honor of Korea) and Durian, a Southeast Asian fruit.

Playing on the themes of the summit meeting, the company displayed signs saying, "Durians May Be Thorny but Relations Needn't Be" and "Feeling More Trump-ish or Kim-ish today?"

James Kwan, a co-director of Common Good, said the company had decided just five days ago to offer the summit-themed items. "We are doing what we can to facilitate peace through food," he said.