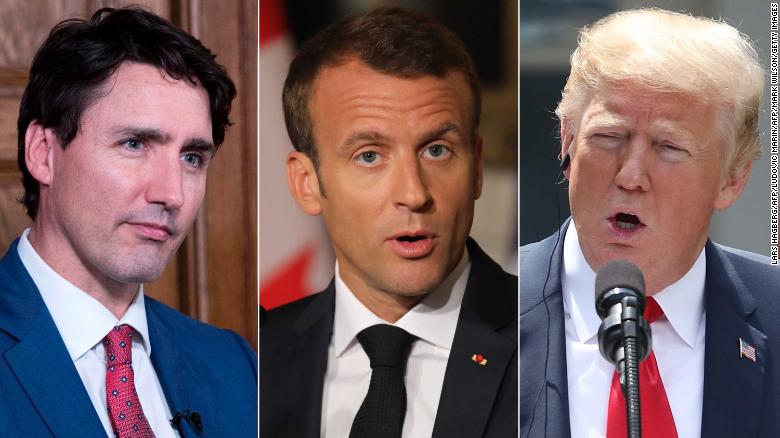 But beneath the smiling handshakes and whispered pleasantries was the unmistakable impression the global alliance of industrialized nations has changed for good.

President Donald Trump arrived expecting to tangle with his foreign counterparts on trade, a fight he proudly began but has been apprehensive about waging in person.

The leaders of France, Germany, Great Britain and Canada all planned to confront him directly about the tariffs on steel and aluminum that they believe threaten America's closest world alliances.

But when the time came to air their grievances in public, the leaders here mainly sounded resigned to the fact their differences with Trump may never be resolved. And they made light of the disputes.

"Sometimes we disagree," shrugged French President Emmanuel Macron ahead of a delayed meeting with Trump. Only a day earlier the two had been sniping at each other over Twitter.

When a reporter jokingly asked the two men to arm wrestle, Trump offered only praise.

"He'd be very tough to beat," Trump said. "He's my friend. We've had a great relationship right from the beginning."

And during an earlier meeting with Canadian Prime Minister Justin Trudeau, the summit's host, Trump too attempted levity amid the rancor.

"Justin has agreed to cut all tariffs, all trade barriers," he announced in jest as Trudeau grinned nearby.

When a reporter asked Trudeau whether he was disappointed the President was departing the summit early, Trump answered for him.

It was a signal the leaders assembled here on a forested outcropping in Quebec are intent on at least maintaining the appearance of comity, even as tensions boil over.

Trump departed the White House sounding defiant on trade, vowing to confront the leaders of America's closest allies, who are infuriated at metal tariffs he applied last week.

But he arrived so late to the conference in remote Canada that he missed his first scheduled sit-down. And he's planning to cut short his visit by several hours on Saturday.

The series of events opened what was expected to be a day-and-a-half of animosity between Trump and infuriated Western leaders, at least behind closed doors. The remaining six leaders are intent on bending Trump's ear before the President departs early for his talks in Singapore with North Korean leader Kim Jong Un.

The stark reality of a US president skipping out on fuming Western allies to have what he's described as a "friendly negotiation" with the North Korean despot has not been lost on diplomats and leaders assembled in the Canadian woods.

And Trump has done little to ease their jitters.

He suggested just before touching down in Quebec that Russia should be allowed to rejoin the summit after five years in exile — a break in the united front allies had hoped to put forward against Moscow's destabilization efforts in the US and Europe.

The remark seemed destined to only escalate the existing tensions between Trump and the six other leaders gathered at a golf resort here. The annual G7 conference is usually a fairly news-free endeavor, with agreements on the global economy hammered out well before world leaders gather for two days of talks.

This year the normally staid affair has been imbued with uncertainty and bitterness. Few expect the assembled leaders will even agree on language for a joint "communique" that typically concludes the summit.

Trump sounded optimistic on that front, saying during his meeting with Trudeau that a joint statement was still possible.

In the mid-afternoon, Trump emerged with fellow world leaders and smiled broadly for a "family photo." The underlying tensions weren't visible as the Saint Lawrence River glinted in the background. But the group retreated quickly behind closed doors for the start of their talks.

Trump was initially due to meet mid-morning with his French counterpart, Macron, who he'd lambasted a night earlier on Twitter. But Trump emerged from the White House South Portico 30 minutes late on Friday morning, and spent another 20 minutes talking to reporters.

By the time Trump did arrive in Canada, met by a cordon of red-jacketed Mounties, he was well behind schedule, making the meeting impossible. Aides rescheduled it for the early evening.

"We've had really a very good relationship, very special. A lot of people wrote a couple of things that weren't quite true — a little bit accurate, perhaps — we've had a little test every once in a while when it comes to trade," Trump said before the sit-down.

"Emmanuel's been very helpful in that regard," Trump said. "And something's going to happen."

The enmity between Trump and Macron was stunning given the elaborate displays of friendship both men have lavished upon each other over the past year. Trump was Macron's guest at last July's Bastille Day celebrations in Paris, an honor reciprocated with a state visit at the White House this spring. The relationship was sometimes characterized as a "bromance," though aides to both men have downplayed that, suggesting instead something of a rivalry between two alpha males new to the political scene.

Trump has been less friendly with Trudeau, who he views as overly liberal, according to aides. On Thursday, the President declared the Canadian prime minister "indignant" on Twitter, decrying his trade views.

But less than 24 hours later the two men were facing each other in white armchairs, grinning ahead of face-to-face talks.

"Our relationship is very good," Trump said. "We are actually working on cutting tariffs and making it all very fair for both countries. And we've made a lot of progress today."

A fractured set of alliances

In Canada, Trump is confronting a fractured set of Western alliances that he has shown little desire to repair. Instead, Trump has embraced the discord with his French, Canadian, German and British counterparts, lashing out on Twitter in the hours before departing on Air Force One for Quebec.

In European capitals and among delegations gathered here at a pristine golf resort, anxiety over the future of US leadership has become more palpable than perhaps any other point in Trump's presidency, with the acrimony spilling into view just as the largest industrial nations hope to put forward a united front.

Trump was unenthusiastic about traveling to Canada for the talks, according to aides, who said he questioned whether his presence was absolutely required. Even as late as Thursday afternoon, he quizzed staffers over whether it was too late to cancel his participation.

He was told that scrubbing his visit altogether would appear like he was shrinking from a fight he proudly began. But his stay in Canada was nonetheless cut short by several hours late Thursday evening when the White House said Trump would depart for Singapore on Saturday after a morning session on gender equality. That means he'll skip the section of the summit focused on climate change and the environment, sending an aide in his place.

If there was any hope the fissures might be repaired before Trump arrived, it was dashed on Friday morning when the President told reporters he was open to reinstating Russia's participation in the group, which was suspended after Moscow's incursion into Ukraine in 2013.

The step of cutting Russia out of the G7 was viewed as a decisive step at the time, one meant to convey unity and isolate and penalize Vladimir Putin as he embarked upon a destabilizing set of actions meant to divide Western nations.

But five years later, the West has never appeared more fractured. US intelligence agencies have determined Russia meddled in the 2016 presidential election in the hopes of helping Trump. And Putin was recently re-elected to another term.