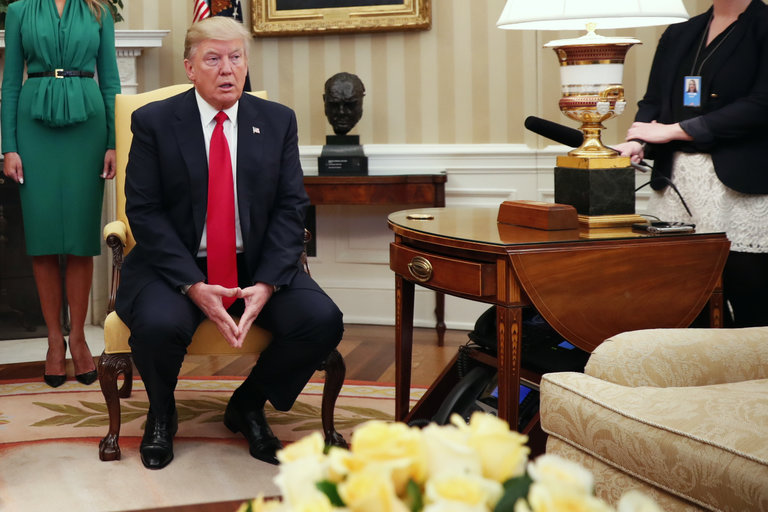 President Trump in the Oval Office on Wednesday.

WASHINGTON — President Trump said on Wednesday that he thought that the former national security adviser Susan E. Rice may have committed a crime by seeking the identities of Trump associates who were swept up in the surveillance of foreign officials by American spy agencies and that other Obama administration officials may also have been involved.

The president provided no evidence to back his claim. Current and former intelligence officials from both Republican and Democratic administrations have said that nothing they have seen led them to believe that Ms. Rice's actions were unusual or unlawful. When Americans are swept up in surveillance of foreign officials by intelligence agencies, their identities are supposed to be obscured, but they can be revealed for national security reasons, and intelligence officials say it is a regular occurrence.

"I think it's going to be the biggest story," Mr. Trump said in an interview in the Oval Office. "It's such an important story for our country and the world. It is one of the big stories of our time."

He declined to say if he had personally reviewed new intelligence to bolster his claim but pledged to explain himself "at the right time."

When asked if Ms. Rice, who has denied leaking the names of Trump associates under surveillance by United States intelligence agencies, had committed a crime, the president said, "Do I think? Yes, I think."

Ms. Rice has denied any impropriety. A spokeswoman for Ms. Rice, Erin Pelton, said in an email on Wednesday, "I'm not going to dignify the president's ludicrous charge with a comment."

In an interview on Tuesday with MSNBC, Ms. Rice said: "The allegation is that somehow the Obama administration officials utilized intelligence for political purposes. That's absolutely false."

Mr. Trump, who has a history of promising to produce evidence to back up his unverified claims, and failing to do so, did not make clear what crime he was accusing Ms. Rice of committing. It is legal and not unusual for a national security adviser to request the identities of Americans who are mentioned in intelligence reports.

Leaking classified information could be a crime, but no evidence has surfaced publicly that indicates Ms. Rice did that and she flatly denied doing so in her interview with MSNBC. "I leaked nothing to nobody, and never have and never would," Ms. Rice said.

Mr. Trump also criticized media outlets, including The New York Times, for failing to adequately cover the Rice controversy — while singling out Fox News and the host Bill O'Reilly for praise, despite a Times report of several women who have accused Mr. O'Reilly of harassment. The president then went on to defend Mr. O'Reilly, who has hosted him frequently over the years.

"I think he's a person I know well — he is a good person," said Mr. Trump, who during the interview was surrounded at his desk by a half-dozen of his highest-ranking aides, including the economic adviser Gary Cohn and the chief of staff, Reince Priebus, along with Vice President Mike Pence.

Mr. Trump described the chemical attack in Syria as a "horrible thing" and "a disgrace."

"I think it's an affront to humanity," he said, adding it was "inconceivable that somebody could do that, those kids were so beautiful, to look at those, the scenes of those beautiful children being carried out."

Asked about what it meant for Russia's role in terms of Syria, Mr. Trump said, "I think it's a very sad day for Russia because they're aligned, and in this case, all information points to Syria that they did this. Why they did this, who knows? That's a level first of all they weren't supposed to have this."

Mr. Trump again pointed to President Barack Obama for drawing "the red line in the sand, and it was immediately violated, and it did nothing," and he suggested reporters won't focus on it.

The president declined to say whether he would speak personally to President Vladimir V. Putin of Russia.