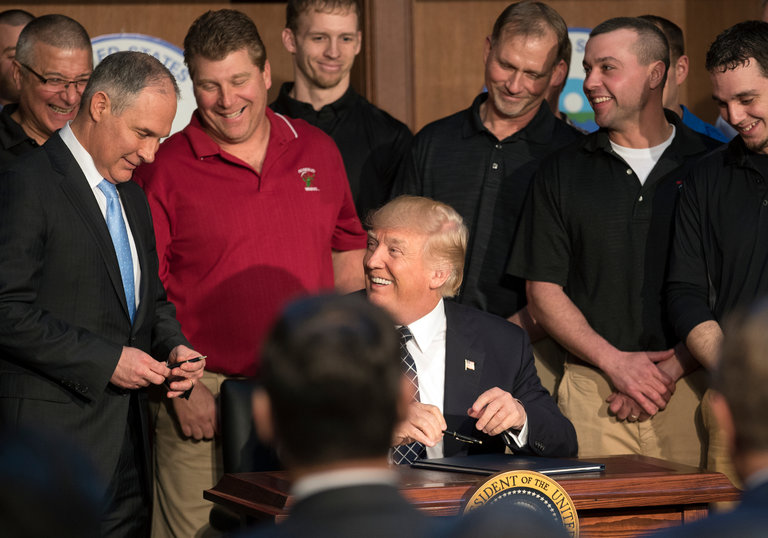 President Trump signed an executive order at the Environmental Protection Agency's headquarters in Washington on Tuesday that rolled back many of President Barack Obama's climate change initiatives.

WASHINGTON — President Trump signed on Tuesday a much-anticipated executive order intended to roll back most of President Barack Obama's climate-change legacy, celebrating the move as a way to promote energy independence and to restore thousands of lost coal industry jobs.

Flanked by coal miners at a ceremony at the Environmental Protection Agency, Mr. Trump signed a short document titled the "Energy Independence" executive order, directing the agency to start the legal process of withdrawing and rewriting the Clean Power Plan, the centerpiece of Mr. Obama's policies to fight global warming.

The order also takes aim at a suite of narrower but significant Obama-era climate and environmental policies, including lifting a short-term ban on new coal mining on public lands.

The executive order does not address the United States' participation in the 2015 Paris Agreement, the landmark accord that committed nearly every country to take steps to reduce climate-altering pollution. But experts note that if the Trump program is enacted, it will all but ensure that the United States cannot meet its global warming commitments under the accord.

Mr. Trump advertised the moves as a way to decrease the nation's dependence on imported fuels and revive the flagging coal industry.

"We're ending the theft of American prosperity and reviving our beloved economy," Mr. Trump said. "The miners told me about the attacks on their jobs. I made them this promise. We will put our miners back to work."

But energy economists say the order falls short of both of those goals — in part because the United States already largely relies on domestic sources for the coal and natural gas that fires most of the nation's power plants.

"We don't import coal," said Robert N. Stavins, an energy economist at Harvard University. "So in terms of the Clean Power Plan, this has nothing to do with so-called energy independence whatsoever."

Scott Pruitt, the E.P.A. administrator, said in an interview on ABC News on Sunday that the order will help the United States "be both pro-jobs and pro-environment."

But coal miners should not assume their jobs will return if Mr. Trump's regulations take effect.

The new order would mean that older coal plants that had been marked for closing would probably stay open for a few years longer, extending the demand for coal, said Robert W. Godby, an energy economist at the University of Wyoming.

But even so, "the mines that are staying open are using more mechanization," he said.

"They're not hiring people," he continued.

Legal experts say it could take years for the Trump administration to unwind the Clean Power Plan, which has not yet been carried out because it has been temporarily frozen by a Supreme Court order. Those regulations sought to cut planet-warming carbon dioxide pollution from coal-fired power plants. If enacted, they would have shut down hundreds of those plants, frozen construction of future plants and replaced them with wind and solar farms and other renewable energy sources.

Throughout his campaign, Mr. Trump highlighted his support of coal miners, holding multiple rallies in coal country and vowing to restore lost jobs to the flagging industry. At a rally last week in Kentucky, Mr. Trump vowed that his executive order would "save our wonderful coal miners from continuing to be put out of work."

While coal mining jobs have dropped in the United States, they do not represent a significant portion of the American economy. Coal companies employed about 65,971 miners in 2015, down from 87,755 in 2008, according to Energy Department statistics.

And though the percentage of coal mining jobs dropped sharply, economists said that was not driven by the Clean Power Plan. Rather, they blamed two key forces: an increase in the production of natural gas, which is a cheaper, cleaner-burning alternative to coal, and an increase in automation, which allowed coal companies to produce more fuel with fewer employees. The rollback of Mr. Obama's regulations will not change either of those forces, economists say.

"These actions are vital to the American coal industry, to our survival, and to getting some of our coal families back to work," said Robert E. Murray, the chief executive of Murray Energy, one of the nation's largest coal mining companies. Mr. Murray, a donor to Mr. Trump's presidential campaign, stood behind the president as he signed the order.

But even Mr. Murray conceded that he did not expect Mr. Trump's order to return coal mining numbers to their former strength. "I really don't know how far the coal industry can be brought back," he said.

For example, the order would require White House economists to recalculate a budgeting metric known as the social cost of carbon that, under the Obama administration, limited pollution by arguing that global warming outweighed economic benefits for industries. It would also eliminate a requirement that federal agencies consider the impact on climate change when analyzing all future environmental permits.

Combined, the measures are likely to ensure the United States' emissions of planet-warming pollution remain too high to meet the terms of the Paris climate accord.

The aim of the Paris deal is to reduce emissions enough to stave off a warming of the planet by more than 3.6 degrees Fahrenheit, the level at which, experts say, the Earth will be irrevocably locked into a future of extreme droughts, flooding and shortages of food and water.

But analysts say Mr. Trump's order signals that the United States will not meet its pledges under the Paris deal to cut its emissions about 26 percent from 2005 levels by 2025.

"Meeting the U.S. terms of the Paris Agreement would require full enforcement of the current regulations, plus additional regulations," said Michael Oppenheimer, a climate scientist at Princeton University. "It takes a comprehensive effort involving every country doing what they committed to and more."

He said Mr. Trump's order "sends a signal to other countries that they might not have to meet their commitments — which would mean that the world would fail to stay out of the climate danger zone."