After Donald Trump wrapped up his first speech to Congress and worked his way through the crowd, he lingered on his handshake with Anthony Kennedy, the 80-year-old Supreme Court justice.

The boom mics picked up their seemingly private conversation.

While the White House is focused this week on shepherding Trump's first Supreme Court nominee, Neil Gorsuch, through the Senate confirmation process, the president and his team are obsessed with the next possible vacancy.

The likeliest candidate is Kennedy, who has sat at the decisive fulcrum of the most important Supreme Court cases for more than a decade. Replacing him with a reliable conservative would tip the court to the right, even if no other seat comes open under Trump — whose team has taken to exploring every imaginable line of communication to keep tabs on the justice and to make him comfortable as he ponders a potential retirement.

One back channel is the fact that Kennedy's son, Justin, knows Donald Trump Jr. through New York real estate circles. Another is through Kennedy's other son, Gregory, and Trump's Silicon Valley adviser Peter Thiel. They went to Stanford Law School together and served as president of the Federalist Society in back-to-back years, according to school records. More recently, Kennedy's firm, Disruptive Technology Advisers, has worked with Thiel's company Palantir Technologies.

In fact, during the early months of the Trump administration, Gregory Kennedy has worked at NASA as a senior financial adviser as part of the so-called "beachhead" team. Both Kennedy boys were spotted at the White House last month for the administration's St. Patrick's Day celebration (Justice Kennedy is Irish Catholic). In February, Ivanka Trump attended oral arguments of the Supreme Court with her daughter. She was a guest of Justice Kennedy.

The White House has also closely monitored retirement chatter by tapping into the network of former Kennedy clerks, a group that includes Gorsuch himself. Some in the legal world viewed Gorsuch's selection — he would be the first Supreme Court clerk to serve alongside a former boss — as an olive branch to Kennedy that, should he retire next, his seat would be in reliable presidential hands.

Those close to Trump's judicial-selection process stress that they're not pressuring Kennedy to hang up his robe, only seeking to put him at ease.

But as they wait for a decision they cannot control, White House officials have already set in motion plans to fill the more than 100 lower court vacancies, including more than 10 percent of the crucial seats on various U.S. Courts of Appeals, in a bid to tug America's courts in a more conservative direction for decades to come.

The Trump playbook for those lower court picks is hidden in plain sight.

Trump took the unusual step on the campaign of producing a public list of 21 possible candidates for the Supreme Court. That pool of judicial talent — in particular, younger judges serving on state supreme courts — are now the front-runners to fill top federal court vacancies, according to three people involved in Trump's judge-selection process.

"Funny how that happened," said a person involved in Trump's judicial selection process. "If they're on a list of prospects for the Supreme Court, they're sure as hell eligible for the Court of Appeals."

Beyond Gorsuch, Trump has so far made one other court selection, and it fits the mold of promoting young judges from his campaign list. Trump nominated U.S. District Judge Amul Thapar, one of the four finalists he personally interviewed for the Supreme Court seat, for a vacancy on the 6th U.S. Circuit Court of Appeals. Thapar is only 47.

"There's a method to the list," said a senior White House official.

Although Senate Majority Leader Mitch McConnell invoked the "nuclear option" Thursday to eliminate the filibuster in order to confirm Gorsuch to the Supreme Court, Trump advisers are still wary of the coming fight over Kennedy's seat. Gorsuch is replacing the late Justice Antonin Scalia, a mainstay of the conservative bloc. Kennedy's retirement would dramatically shift the political center of gravity on the court.

Putting state-level judges on federal courts can make eventual elevation to the Supreme Court smoother, one of the Trump advisers noted. For highly regarded state supreme court justices, it puts them through the ringer of Senate confirmation once, including a thorough review of all the paperwork that could trip them up as a potential high court nominee.

"It's smart to push them through a Senate confirmation once," the adviser said.

More such court picks are already in the pipeline. "Some of those are in FBI background checks," a second top-ranked White House aide said on Friday, a final step before being nominated.

While appellate court appointments receive only a fraction of the attention given to Supreme Court nominees, they are the final arbiter for the vast majority of federal cases. 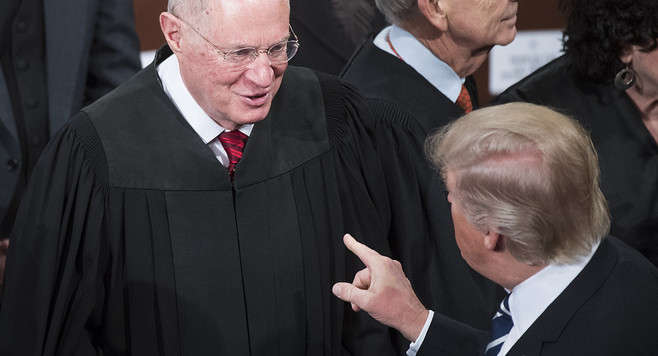 "The Supreme Court only hears about 80 cases a year," said Senate Majority Whip John Cornyn, himself a former state Supreme Court justice in Texas. "So where all the action is — is at the trial court and circuit court level. So it's very important, and we're working hard with the administration to vet nominees for those courts right now."

Two other judges particularly well-regarded by Trump's advisers are Joan Larsen of the Michigan Supreme Court and Thomas Lee of the Utah Supreme Court, the brother of Sen. Mike Lee. There are no vacancies at the federal appellate courts in their states. But Trump advisers are tracking closely two Republican-appointed judges on the D.C. Circuit Court of Appeals who could declare senior status this year, and thus open up slots on what is widely seen as the second most powerful court in the country.

While picks are not yet final, a third person close to the selection process said of the campaign's list, "These are people partially vetted by the Trump campaign, so there's a certain degree of comfort. And if there's vacancies in those seats, those would be the natural folks."

Officials involved in the court selections say that age is a huge factor for the lifetime appointments; the five judges above are all under 55. Gorsuch is only 49.

"He has a chance to put younger people that are going to be on there for 20 or 30 years," said Sen. Marco Rubio of Florida.

One young potential judge is Scott Keller, the solicitor general of Texas and a former adviser to Sen. Ted Cruz. He graduated from college in 2004 and clerked for Justice Kennedy in the term that ended in 2010. Another Texas former solicitor general in the running for an appointment is James Ho, an Asian-American Gibson-Dunn attorney who clerked for Supreme Court Justice Clarence Thomas and served as chief counsel to Cornyn.

Democrats in the Senate seem intent on slowing Trump's influence on the courts, including filibustering Gorsuch. President Barack Obama, they note, had only 22 confirmed judges in the last two years of his term, including only two circuit-court judges. When Obama left office, he had more than 50 judges still pending in the Senate.

While Democrats do not have the votes to block Trump nominees, they can withhold so-called "blue slips," the century-old tradition of home-state senators approving judges representing their states. One Trump official said it's possible that the White House could use holdover Obama appointees as bargaining chips for more speedily confirming Trump picks.

Republican and Democratic lawmakers alike are readying for the biggest fight if and when Kennedy retires.

Trump officials say the president does not feel constrained to pick a second Supreme Court justice from his campaign list, despite a September press release in which Trump said, "This list is definitive and I will choose only from it in picking future Justices of the United States Supreme Court."

One new name percolating at the highest levels of the Trump administration is Brett Kavanaugh, a 52-year-old who has already served a decade on the D.C. Court of Appeals.

That may not be an accident. He, too, is a former clerk of Justice Kennedy.