From the start of his presidency, Donald Trump's "war on terror" has entailed the seemingly indiscriminate slaughter of innocent people in the name of killing terrorists. In other words, Trump has escalated the 16-year-old core premise of America's foreign policy — that it has the right to bomb any country in the world where people it regards as terrorists are found — and in doing so, has fulfilled the warped campaign pledges he repeatedly expressed.

The most recent atrocity was the killing of as many as 200 Iraqi civilians from U.S. airstrikes this week in Mosul. That was preceded a few days earlier by the killing of dozens of Syrian civilians in Raqqa province when the U.S. targeted a school where people had taken refuge, which itself was preceded a week earlier by the U.S. destruction of a mosque near Aleppo that also killed dozens. And one of Trump's first military actions was what can only be described as a massacre carried out by Navy SEALs, in which 30 Yemenis were killed; among the children killed was an 8-year-old American girl (whose 16-year-old American brother was killed by a drone under Obama).

In sum: Although precise numbers are difficult to obtain, there seems little question that the number of civilians being killed by the U.S. in Iraq and Syria — already quite high under Obama — has increased precipitously during the first two months of the Trump administration. Data compiled by the site Airwars tells the story: The number of civilians killed in Syria and Iraq began increasing in October under Obama but has now skyrocketed in March under Trump. 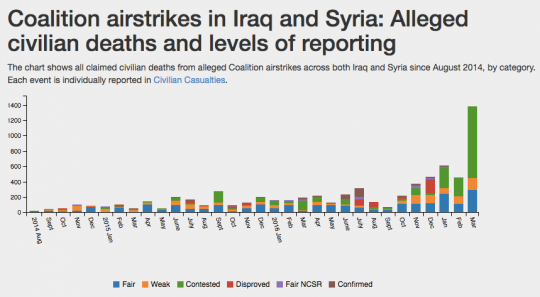 What's particularly notable is that the number of airstrikes actually decreased in March (with a week left), even as civilian deaths rose — strongly suggesting that the U.S. military has become even more reckless about civilian deaths under Trump than it was under Obama: 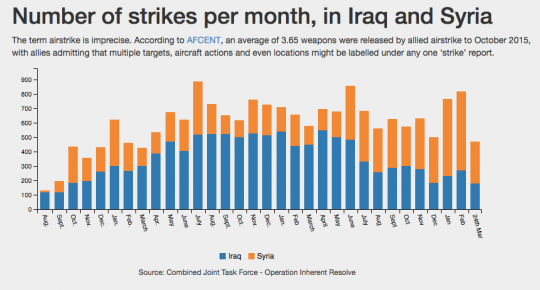 This escalation of bombing and civilian deaths, combined with the deployment by Trump of 500 ground troops into Syria beyond the troops Obama already deployed there, has received remarkably little media attention. This is in part due to the standard indifference in U.S. discourse to U.S. killing of civilians compared to the language used when its enemies kill people (compare the very muted and euphemistic tones used to report on Trump's escalations in Iraq and Syria to the frequent invocation of genocide and war crimes to denounce Russian killing of Syrian civilians). And part of this lack of media attention is due to the Democrats' ongoing hunt for Russian infiltration of Washington, which leaves little room for other matters.

But what is becoming clear is that Trump is attempting to liberate the U.S. military from the minimal constraints it observed in order to avoid massive civilian casualties. And this should surprise nobody: Trump explicitly and repeatedly vowed to do exactly this during the campaign.

He constantly criticized Obama — who bombed seven predominantly Muslim countries — for being "weak" in battling ISIS and al Qaeda. Trump regularly boasted that he would free the U.S. military from rules of engagement that he regarded as unduly hobbling them. He vowed to bring back torture and even to murder the family members of suspected terrorists — prompting patriotic commentators to naïvely insist that the U.S. military would refuse to follow his orders. Trump's war frenzy reached its rhetorical peak of derangement in December 2015, when he roared at a campaign rally that he would "bomb the shit out of ISIS" and then let its oil fields be taken by Exxon, whose CEO is now his secretary of state.

Trump can be criticized for many things, but lack of clarity about his intended war on terror approach is not one of them. All along, Trump's "solution" to terrorism was as clear as it was simple; as I described it in September 2016:

The clarity of Trump's intentions regarding the war on terror was often obfuscated by anti-Trump pundits due to a combination of confusion about and distortions of foreign policy doctrine. Trump explicitly ran as a "non-interventionist" — denouncing, for instance, U.S. regime change wars in Iraq, Libya, and Syria (even though he at some points expressed support for the first two). Many commentators confused "non-interventionism" with "pacifism," leading many of them — to this very day — to ignorantly claim that Trump's escalated war on terror bombing is in conflict with his advocacy of non-interventionism. It is not.

To the extent that Trump is guided by any sort of coherent ideological framework, he is rooted in the traditions of Charles Lindbergh (whose "America First" motto he took) and the free trade-hating, anti-immigration, über-nationalist Pat Buchanan. Both Lindbergh and Buchanan were non-interventionists: Lindbergh was one of the earliest and loudest opponents of U.S. involvement in World War II, while Buchanan was scathing throughout all of 2002 about the neocon plan to invade Iraq.

Despite being vehement non-interventionists, neither Lindbergh nor Buchanan were pacifists. Quite the contrary: Both believed that when the U.S. was genuinely threatened with attack or attacked, it should use full and unrestrained force against its enemies. What they opposed was not military force in general but rather interventions geared toward a goal other than self-defense, such as changing other countries' governments, protecting foreigners from tyranny or violence, or "humanitarian" wars.

What the Lindbergh/Buchanan non-interventionism opposes is not war per se, but a specific type of war: namely, those fought for reasons other than self-defense or direct U.S. interests (as was true of regime change efforts in Iraq, Libya, and Syria). Lindbergh opposed U.S. involvement in World War II on the ground that it was designed to help only the British and the Jews, while Buchanan, on the eve of the Iraq invasion, attacked neocons who "seek to ensnare our country in a series of wars that are not in America's interests" and who "have alienated friends and allies all over the Islamic and Western world through their arrogance, hubris, and bellicosity."

The anti-Semitism and white nationalistic tradition of Lindbergh, the ideological precursor to Buchanan and then Trump, does not oppose war. It opposes military interventions in the affairs of other countries for reasons other than self-defense — i.e., the risking of American lives and resources for the benefits of "others."

Each time Trump drops another bomb, various pundits and other assorted Trump opponents smugly posit that his doing so is inconsistent with his touted non-interventionism. This is just ignorance of what these terms mean. By escalating violence against civilians, Trump is, in fact, doing exactly what he promised to do, and exactly what those who described his foreign policy as non-interventionist predicted he would do: namely, limitlessly unleash the U.S. military when the claimed objective was the destruction of "terrorists," while refusing to use the military for other ends such as regime change or humanitarianism. If one were to reduce this mentality to a motto, it could be: Fight fewer wars and for narrower reasons, but be more barbaric and criminal in prosecuting the ones that are fought.

Trump's campaign pledges regarding Syria, and now his actions there, illustrate this point very clearly. Trump never advocated a cessation of military force in Syria. As the above video demonstrates, he advocated the opposite: an escalation of military force in Syria and Iraq in the name of fighting ISIS and al Qaeda. Indeed, Trump's desire to cooperate with Russia in Syria was based on a desire to maximize the potency of bombing there (just as was true of Obama's attempt to forge a bombing partnership with Putin in Syria).

What Trump opposed was the CIA's yearslong policy of spending billions of dollars to arm anti-Assad rebels (a policy Hillary Clinton and her key advisers wanted to escalate), on the ground that the U.S. has no interest in removing Assad. That is the fundamental difference between non-interventionism and pacifism that many pundits are either unaware of or are deliberately conflating in order to prove their own vindication about Trump's foreign policy. Nothing Trump has thus far done is remotely inconsistent with the non-interventionism he embraced during the campaign, unless one confuses "non-interventionism" with "opposition to the use of military force."

Trump's reckless killing of civilians in Iraq, Syria, and Yemen is many things: barbaric, amoral, and criminal. It is also, ironically, likely to strengthen support for the very groups — ISIS and al Qaeda — that he claims he wants to defeat, given that nothing drives support for those groups like U.S. slaughter of civilians (perhaps the only competitor in helping these groups is another Trump specialty: driving a wedge between Muslims and the West).

But what Trump's actions are not is a departure from what he said he would do, nor are they inconsistent with the predictions of those who described his foreign policy approach as non-interventionist. To the contrary, the dark savagery guiding U.S. military conduct in that region is precisely what Trump expressly promised his supporters he would usher in.