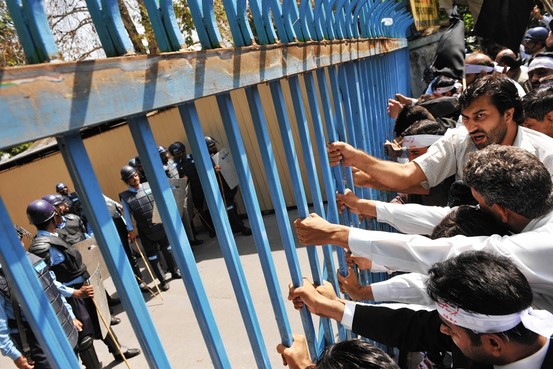 Protesting Pakistani lawyers try to reach the U.S. Embassy in Islamabad on Wednesday

WASHINGTON—U.S. intelligence officials are investigating indications that al Qaeda's North African affiliate is connected with militants involved in the attack on a U.S. consulate in Libya, the top U.S. counterterrorism official said, providing the first public acknowledgment of the extremist movement's possible involvement in the deadly assault.

The Sept. 11 attack in Benghazi, Libya, came as protests erupted there and in Egypt, before spreading throughout the Middle East and to Europe and Southeast Asia after word circulated of an Internet video considered offensive to Islam. Protests continued Wednesday in Pakistan, and angry crowds forced a U.S. consulate in Indonesia to close. Western officials braced for more trouble after a French satirical magazine published caricatures of the Prophet Muhammad.

In the wake of last week's attacks, the Obama administration has begun to bolster security at other hot spots in Africa,including Tunisia and Sudan,where the State Department is airlifting armored vehicles and other security equipment.

The acknowledgment of a possible al Qaeda role came at a congressional hearing in which government officials were peppered with questions about the adequacy of security at the U.S. Consulate in Libya, where the Sept. 11 attacks killed Ambassador Christopher Stevens and three other State Department officials.

The Wall Street Journal reported last week that U.S. intelligence officials were examining evidence that operatives for al Qaeda in the Islamic Maghreb had a series of conversations with members of Ansar al-Sharia, a local militant group sympathetic with al Qaeda, on the day violent protests broke out in Cairo.

Testifying before a Senate committee on Wednesday, Matthew Olsen, director of the National Counterterrorism Center, said intelligence officials are examining the possibility of such links. "We are looking at indications that individuals involved in the attack may have had connections to al Qaeda or al Qaeda's affiliates, in particular, al Qaeda in the Islamic Maghreb," he said, calling the assault on the consulate a "terrorist attack."

An armed man on Sept. 11 in Benghazi, Libya.

It may be the case that both local militants and an overseas al Qaeda affiliate were involved in the attacks, he added. "The picture that is emerging is one where a number of different individuals were involved," he said.

Mr. Olsen also faced persistent questioning at the hearing, before the Senate Homeland Security and Governmental Affairs Committee, over the adequacy of diplomatic security in Libya. "The attack in Benghazi was not a black swan, but rather an attack that should have been anticipated," said Sen. Susan Collins (R., Maine), the top Republican on the panel.

She said Marines should have been dispatched to Benghazi to provide security as dangers grew in the area in recent months. Last week's assault was the sixth that militants have mounted in Benghazi since April.

Intelligence agencies had issued reports about the growing unrest in the area in recent months, Mr. Olsen said, but added there were no specific indications of an attack on Sept. 11. "We do rely on host countries to help protect our diplomatic personnel in those countries," Mr. Olson said.

Officials at the State Department and White House also defended administration policies on diplomatic security. But they said much remains unknown about the Benghazi assault and that officials are awaiting results of a probe by the Federal Bureau of Investigation.

After the attacks, the administration moved Marine units to Libya and Egypt. On Wednesday, the U.S. State Department began airlifting armored vehicles and other equipment to its missions in Tunisia and Sudan. The shipment was revealed through regulatory filings after a U.S. cargo airline objected to the State Department's use of a Russian carrier, Volga-Dnepr Airlines LLC, which has to secure special permission to fly its huge Antonov An-124 cargo planes on special missions for the U.S. government and private American clients.

The Volga-Dnepr plane took off from Washington, D.C., with the equipment early Wednesday en route to Tunis, the company said, and was due to continue to Khartoum.

The U.S. carrier—Kalitta Air LLC of Ypsilanti, Mich.—sought to block the use of Volga-Dnepr, arguing in regulatory filings that its own Boeing Co.

747-200 planes could carry the equipment and unload them in the two African capitals.

Volga-Dnepr, backed by the State Department, argued in its request for clearance from the Department of Transportation that only its planes were suitable for a 52-ton shipment that the filings said would include seven armored vehicles and other "physical security equipment."