U.S. soccer star Abby Wambach had a memorable match yesterday after getting 'sucked punched' in the face by a Colombian opponent.

In the first half of the US's 3-0 win over Colombia, Wambach tangled with Lady Andrade and ended up getting ‘sucker punched’, she says.

Despite her black eye, the 32-year-old striker went on in the second half to score a goal and break the U.S. women's soccer record for goals at the Olympics with a tally of six. 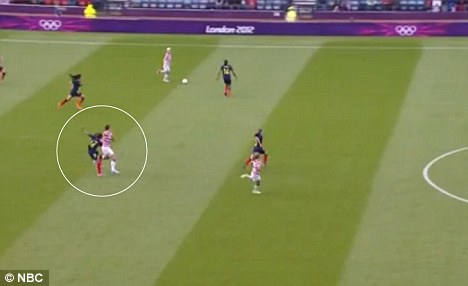 Aggressive: In the first half of the US's 3-0 win over Colombia, U.S. soccer star Abby Wambach tangled with Lady Andrade and ended up getting ¿sucker punched¿ 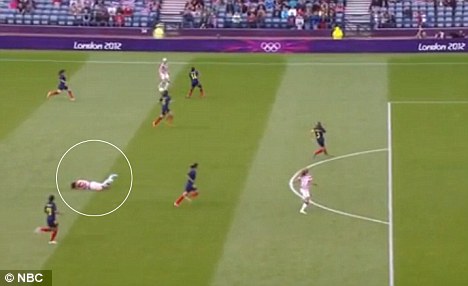 Floored: 'I'm running toward the goal to get position, and I got sucker-punched,' said Wambach, who is seen here writhing on the pitch in agony

Footage appears to show Lady Andrade punch Wambach straight in the face, sending her to the ground writhing in pain. However, the incident went unnoticed by referees and play continued.

A slow motion reply appears to show an intentional right-hook to the face.

'I'm running toward the goal to get position, and I got sucker-punched,' said Wambach, sporting a black semicircle under her swollen right eye after the game. 'It's clear. We have it on film, so it's up to the Olympic committee and FIFA to decide what to do.'

Wambach said Andrade kept on taunting in the second half and attempted another blow to the face – but missed and hit Wambach's neck instead.

When Wambach scored in the 74th minute to make the score 2-0, the achievement felt particularly sweet. 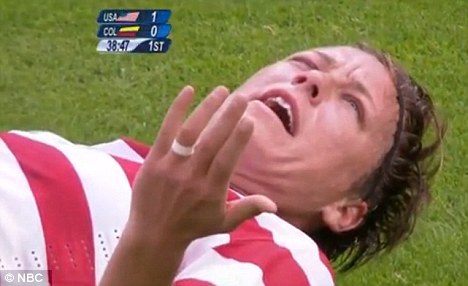 What the….? Referees didn't see the scrap and the game continued; Wambach says she is proud of herself for not retaliating to the punch 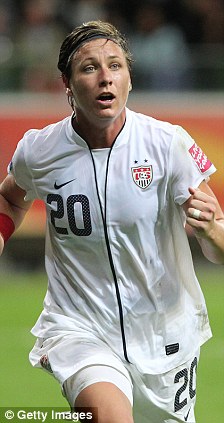 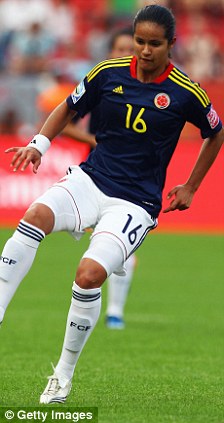 Wrangling: Lady Andrade, right, dismissed the run-in as an accident

'Absolutely. It's interesting – you think about yourself and what you would do on the street if somebody were to sucker-punch you,' Wambach said.

Unsurprisingly, Andrade’s version of yesterday's events in Glasgow, Scotland, was different and she dismissed the run-in as an accident. 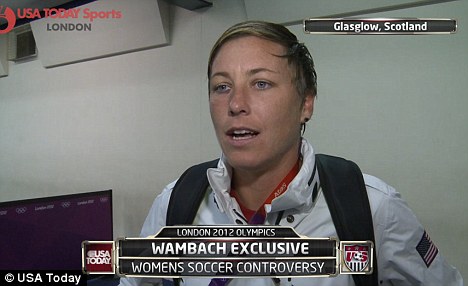 Record-breaker: After a goal in the second half, Wambach broke the U.S. women's soccer record for goals at the Olympics with a tally of six

'Nothing happened,' she said through an interpreter. 'It was just a normal part of the game. We were both running, she ran across me and we collided. I had my hands in the air. It was an accident.'

Told that Wambach wants Andrade disciplined by the governing bodies, the Colombian said: 'I think they should be, too, because they're the United States. The whistle always goes in their favor. They were hitting us and hitting us, but there was never a whistle.'