I was just happy to be able to pay my rent with a typewriter. This was before the internet. Guys had to go out and walk into actual stores to buy nudie mags. For a while I was writing the fake sex letters for Penthouse Forum. You know— my girlfriend's into scrotal scarring, so one day she asked me if she could make a smiley-face with a can opener on my manhood—but porn was never, like, the guiding focus of my life on the planet. I was too busy writing unpublished novels, doing journalism gigs, and putting holes in my arm. It probably sounds insane now, but I just wanted to be a writer, and I really didn't discriminate between cereal boxes and Shakespeare. Though in my head I was Kafka, I basically wrote smut when I needed money. 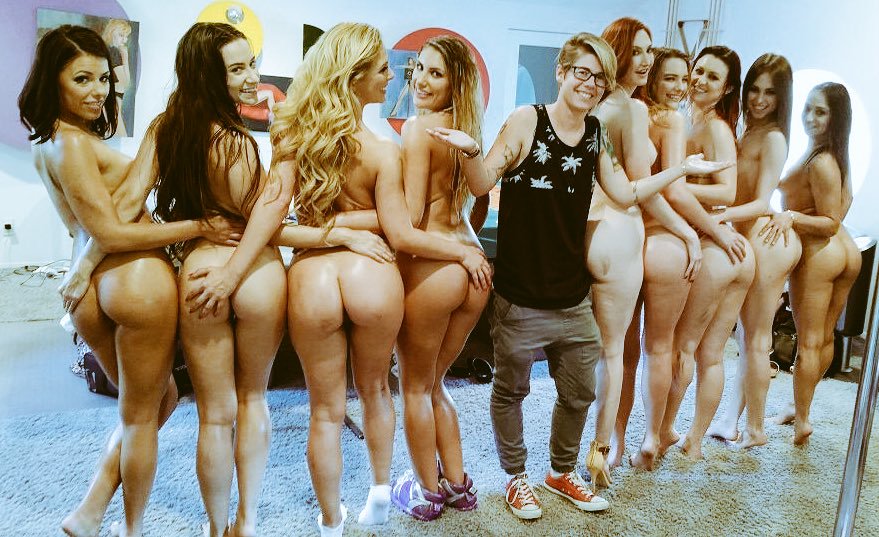 Bree Mills and the cast or Sovereign Syre. Photo by Richard Avery 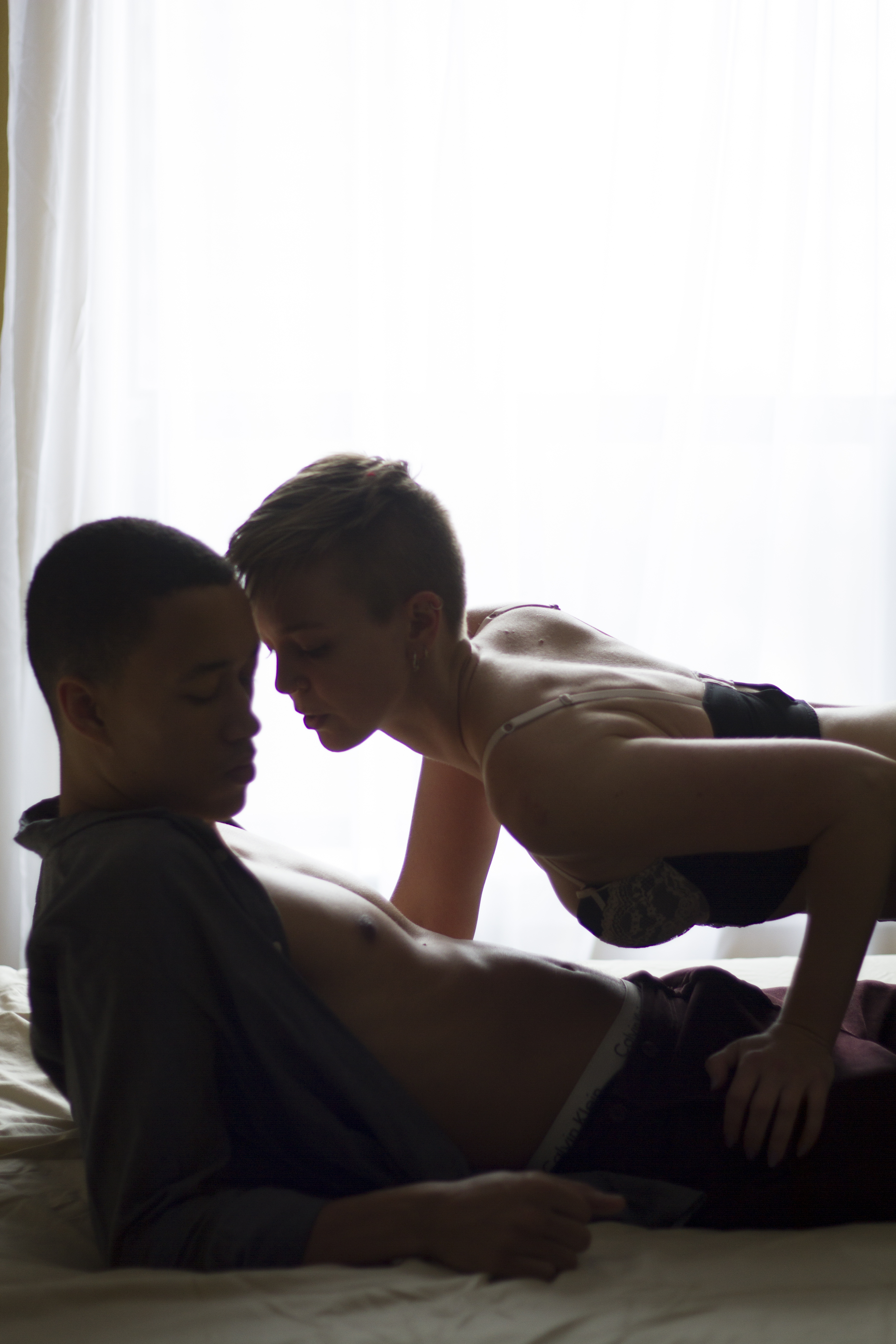 I wrote my first piece of erotica about three years ago, as a contribution to a weird comedy zine. It was supposed to be a joke, at first. The story was inspired by a close friend, our complicated love-hate relationship, and my neuroses concerning the cleanliness of my apartment. Not surprisingly the piece was never published anywhere else, but the good thing about erotica is that even poorly written stories can still be masturbated to. I kept writing and gradually things got better. I started figuring out what was working and what wasn't. The main shift I experienced at that time was that I was no longer writing stories specifically catered to my own desires. A personal or autobiographical touch is always welcome in writing but forcing myself to expand my subject matter and make my style more accessible was definitely a step in the right direction professionally. About a year into writing I had developed a decent portfolio and began submitting my work. Getting published felt great. But what felt even better was getting published the second time. It proved it was more than a fluke.

My writing is more conversational than most. My personal preference is towards erotica that isn't too flowery. I usually skim through lengthy lead ups. But, in my opinion, you can never get too specific and detailed once the actual sex begins. My favourite story right now has to be my contribution to The New Urge Reader 2. The story has a simple enough premise, two girlfriends secretly connecting under a restaurant table, but the combination of autobiographical details and genuine writing made the piece really pop. I found it really sexy. Other people did, too.

There's definitely an element of exhibitionism (that I've always enjoyed) in having other people read my erotic stories, because they touch on intimate, sometimes taboo, and usually private subject matter. I had a debate with a fellow writer recently on whether all erotica could be categorized as exhibitionist fetishism, simply because the reader exists. Should the reader be brought into the equation, as they're essentially peeping through the keyhole the entire time? Would these scenes and characters serve a purpose if there was no one to read them? Like, if a forest elf gives a fairy princess an orgasm in the woods but there is no one around to hear it, does she make a sound? If anything, writing erotica has taught me about the countless layers and subtleties that can exist within one's sexuality. Day to day, it reminds me to keep exploring, learning, and having great orgasms.

One of my favourite moments as an erotica writer came when I developed a close relationship with an elderly patron at my day job. She was a retired English teacher who was always invested in the personal lives of the staff. The employees would take turns sitting and talking with her every time she came in. I would usually ask her about the book she was reading, and at one point I offhandedly mentioned that I wrote short stories. Suddenly very interested, she insisted that I bring a story in for her to read. I mentioned that it might not be her cup of tea, hesitantly revealing that I wrote erotic fiction. "I don't see a problem with that," she said, and reminded me that she could "always be revived with smelling salts." From there forward, we exchanged multiple stories that we had authored back and forth, and I have to say, the eroticism in her stories surprised me more than mine seemed shock her.

I think people could always stand to re-examine the way they think about sex. The stigmas they hold, the patterns they fall into, the judgments they have. Keep the conversation about sex and sexuality going, even if it's only in your own head. Put energy into it. Read literature, take classes, listen to podcasts, spectate performances, support your local sex shop, visit sex clubs... the sexual resources, sexual wellness practitioners, and fun, sexy events are countless. Stay open, practice inclusivity, and make self love a part of your daily routine. That's the key to making the most out of your sex. 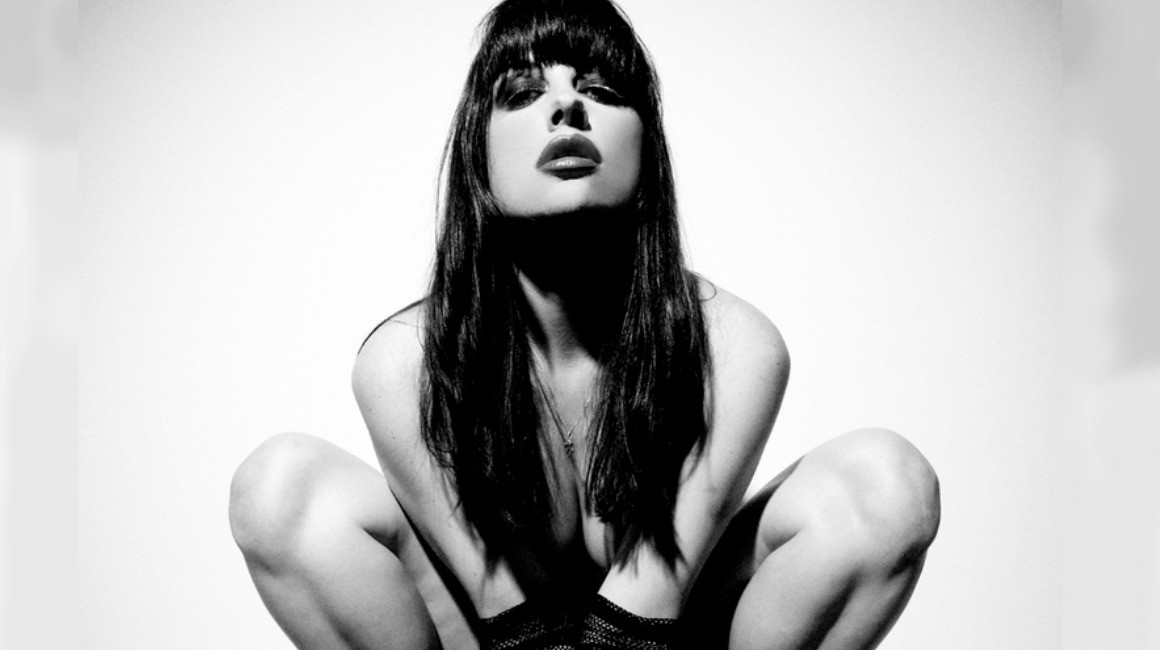 The movies that were being produced when I began performing in adult were noted for their "ethical" content, the idea that the characters in the stories were portrayed as three-dimensional, that the stories had an emotional as well as provocative narrative, they were like mainstream movies with hardcore sex scenes. The focus was on the realness of the sex being portrayed along with a compassionate portrayal of the subjects. I like scenes in which there is an emotional weight, erotic thrillers. For instance: Silence of the Lambs is an intensely pornographic film, the violence and peril sublimate, the sexual tension built up between a dangerous man and a curious woman. That idea extended into the films I liked to work on most, but those wouldn't come around too often. Most productions don't even have a script, you just improvise in the moment. Most scripts are written by people that are kind of over the whole thing, they've been doing this for years and they anticipate that the audience doesn't really care about the lead up to the sex. They're not trying to push any boundaries, they're not even necessarily thinking about trying to turn the audience on, they're just trying to shoot out the scene. I have tropes that I don't care for in particular, but that's just my own peccadillos. I'm not a fan of incest porn, specifically mother/daughter stuff. I love my mom, the idea of her trying to have a sexual relationship with me just really makes me upset. I've been sent scripts with dialogue that would make your skin crawl.

My favorite scenes I performed in were in She's Come Undone and Hollywood Babylon, two movies in which the story of the protagonist was made more emotionally vivid by the sexual scenarios, they walked a line in terms of traditional porn tropes. In She's Come Undone, it was an all-girl movie, and the unspoken rule in lesbian productions is that the characters live in a world where men don't exist. In She's Come Undone, we put in a soft core rape scene with Manuel Ferrara. We chose him for a sort of shorthand. His scenes are rough and intense, and he's immediately recognizable. I was a girl on girl only performer so the audiences who knew us could do the math of how overwhelmed I might be in a very short amount of time. It was a thirty second cutaway, but when people wrote to me about the movie, that was the scene that was filled with the most eroticism for them. In Hollywood Babylon, we have a scene at the beginning that seems like rape, or at best, dubious consent, but the character isn't acknowledging what is happening. For many viewers this same non-consent scenario made them incredibly uncomfortable because it mirrors the real life reaction of many rape victims and the scene wasn't meant to be arousing. I supposed that's my specific obsession. That carried over when I wrote/directed my first film.

A studio called Filly Films had an open call for directors. I submitted my idea about four scenarios involving women and consent that didn't have to do with age, incest, or race. I had the idea to create taboo story lines without broaching the obvious. I wrote Lesbian Surrender in a day. One story is about a girl who finds her girlfriend has been having an affair with a young senator, so the girl goes to the senator's house and confronts the senators hapless wife. She makes her take off her clothes and photographs her for blackmail. They both realize they have horrible partners and end up fucking. The second is a photographer that shoots a French model that can't speak English. She's lonely so she talks the girl into having sex with her for money. The third story is a girl recounting how she was talked into doing porn by another girl while they were shooting a fetish video. The fourth was about a Christian conversion therapist that's trying to help a recent college grad become straight. The girl turns the tables on the therapist. That scenario still turns me on. I'm still proud of that movie. The camera work wasn't the best, and I was dealing with performers that weren't actors/weren't going to memorize the script, but I thought the stories were solid.

I think the takeaway I found from writing Lesbian Surrender is that you can create taboos anywhere, but that for sex to be hot, it needs to be a little bit transgressive. People like to fight when they fuck, whether it's physically, socially, or spiritually. That goes hand in hand with writing about people in a novel or writing a joke, there has to be something at stake and people are always looking for someone to shake them out of their bounds.

* This name has been changed