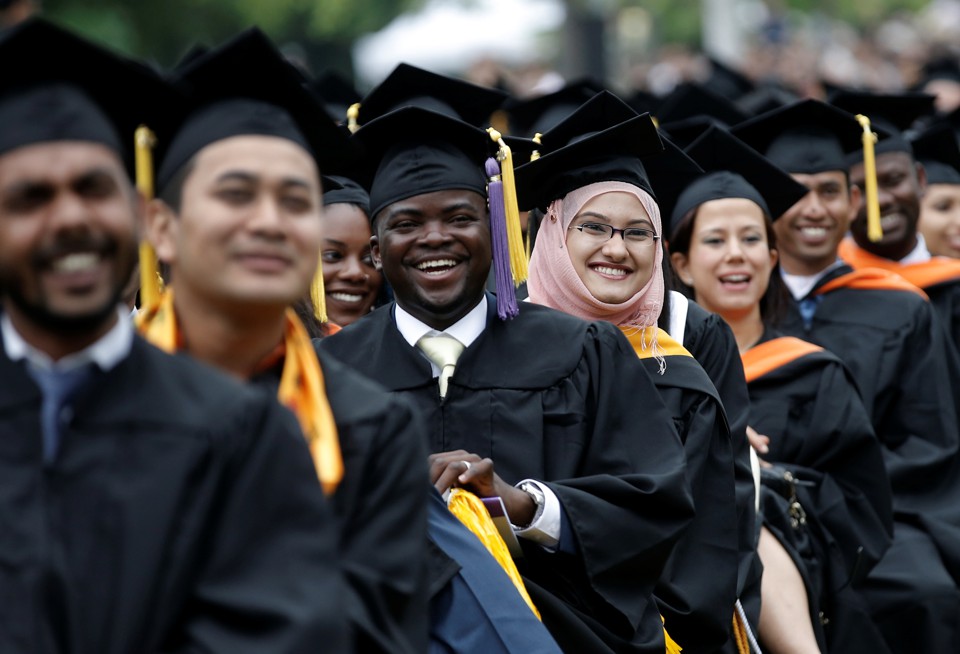 This time of year, thousands of college applicants await e-notices and auspiciously sized envelopes from schools, under terrible pressure from their parents, friends, teachers, and fretful inner-monologues. To this anxious lot, I offer some advice, which comes not only from a bit of experience, but also a bit of empirical research: just chill out, okay?

Many parents and students think there is a world of difference between the lifelong outcomes of (a) an A-minus student who gets into, say, Princeton, and (b) an A-minus student who applies to Princeton but "only" gets into some less selective school, like Penn State or the University of Wisconsin. They assume that a decision made by faceless adjudicators in Ivy League cloisters will mark the difference between success and failure in life.

There are two important things to say about this stress. First, to put the anxiety into context, the kids applying to these schools are already doing quite well. Seventy percent of 29-year-olds don't have a bachelor's degree, and the majority of BAs are earned at non-selective schools that accept a majority of their applicants. Many of the people applying to selective colleges have already won life's lottery.

But if that doesn't ease the nerves of the 40,000 people waiting on Stanford or Penn, here is a more counter-intuitive—and even heartening—conclusion from economics. For most of these applicants, it simply doesn't really matter if they don't get into their top choice, according to a paper by Stacy Dale, a mathematician at Mathematica Policy Research, and Alan Krueger, an economist at Princeton University.

What does that mean, exactly? It means that, for many students, "who you are" as an 18-year-old is more important than "where you go." After correcting for a student's pre-existing talent, ambition, and habits, it's hard to show that highly selective colleges add much earning power, even with their vaunted professors, professional networks, and signaling. If you're one of the roughly 50,000-100,000 students who is sweating a decision from one of these tony schools, you're focused on the wrong thing. The decision of a group of people you've never met isn't as important as the sum of the decisions, habits, and relationships you've built up to this point in your young life.

For the elite colleges themselves, the Dale-Krueger paper had an additional, fascinating finding. The researchers found that the most selective schools really do make an extraordinary difference in life earnings for "black and Hispanic students" and "students who had parents with an average of less than 16 years of schooling."

In other words, getting into Princeton if your parents went to Princeton? Fine, although not a game-changer. But getting into Princeton if your parents both left community college after a year? That could be game-changing. There are several potential explanations, but I'm most persuaded by one that Dale and Krueger put in their conclusions section. Minority students from less-educated families are more likely to rely on colleges to provide the internship and job networks that come automatically from living in a rich neighborhood with wealthy parents.

The irony is that elite colleges are disproportionately kind to legacy students and famously struggle to fill their classes with high-achieving minorities and other low-income students from less prestigious high schools. Controlling for test scores and grades, a legacy student is about three-times more likely to be accepted to a highly selective college. Several elite schools, like Washington University in St. Louis and Middlebury, accept more students from the top 1 percent than the bottom 60 percent. It's highly unlikely that these ratios are justified, even purely as a matter of essential funding, considering these schools' endowments and glittering facilities.

Meanwhile, the majority of "low-income, high achieving students"—those with SAT scores above the 90th percentile, but from the poorest 25 percent of households—aren't being rejected from Harvard and Brown. But that's because they're extremely unlikely to apply in the first place, according to research by the economists Caroline M. Hoxby and Christopher Avery. Attracting lower-income students often means directly marketing in school districts that haven't historically sent many teenagers to the Ivy League and its peers. Elite colleges don't market as heavily in lower-income areas. But they could, for example, by advertising on social media or deploying their sprawling alumni networks to visit high schools in poorer areas and talk with their brightest students.