"There is no other Donald Trump," Hillary Clinton likes to say about her opponent. "This is it."

The events of the last two weeks—Trump's two debate performances, the release of his bawdy comments about women in a 2005 video clip, his lashing out against Republicans who are deserting him—have proven Clinton correct on that count.

But the leak of thousands of hacked email exchanges among Clinton's top advisers suggest the same can be said about her—at least in her role as a public figure. They capture a candidate, and a campaign, that seems in private exactly as cautious, calculating, and politically flexible as they appeared to be in public. The Clinton campaign underestimated and then fretted about rival candidate Bernie Sanders, worried about Joe Biden entering the primary race and Elizabeth Warren endorsing her opponent, plotted endlessly about managing Clinton's image in the press, took advantage of its close ties to the Obama administration and the hierarchy of the Democratic Party, and took public positions to the left of comments Clinton herself made during private paid speeches to Wall Street firms. 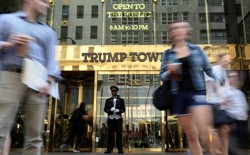 Can a President Trump Keep His Business Intact?

In fairness to Clinton, the emails made public by WikiLeaks reveal little about her as a person. These were hacked from the accounts of John Podesta, her campaign chairman, and very few of them are from Clinton herself. But they do shed light on Clinton as a candidate by showing just how carefully her closest aides crafted the message she presents to the world, down to the wording of her tweets and the jokes she does—or doesn't—choose to tell.

How you react to the emails will almost certainly depend on how you already felt about Clinton. A diehard Bernie Sanders fan who sees Clinton as a corporate Democrat driven by expedience will find confirmation in her vacillation over what kind of Wall Street reform to support, her backing of the Bowles-Simpson plan that would have cut spending on entitlement programs, and her musing in a paid speech that "you need both a public and a private position" on policy. In mentioning the dual positions, she was making a comparison to Steven Spielberg's Lincoln and the unsavory political machinations Honest Abe had to undertake to achieve ratification of the 13th Amendment.

Those who view Clinton as hopelessly liberal, craven, and corrupt will seize, as the Trump campaign has, on her stated "dream" of "a hemispheric common market with open trade and open borders." They'll smell conspiracy when they read hints that a Clinton campaign spokesman who formerly worked for the Justice Department got a heads up on a court hearing related to the release of her State Department emails. The Trump campaign said it was evidence of "collusion" between the campaign and the Justice Department, but notice of the hearing would have been public information.

"I understand that we face phoniness charges if we 'change' our position now—but we face political risks this way too."

The most common thread in the Podesta emails, however, is that they show a political candidate being political. Not much more, and not much less. Clinton is a mainstream Democrat who admires "moderates" and pragmatism. And yes, she did move to the left to defeat an insurgent liberal opponent.

Take the example of the Keystone pipeline. It was painfully obvious that for months, Clinton avoided taking a position on the hotly-debated energy project, perhaps in the hopes that the Obama administration would decide to kill it first. The emails bolster this theory. Once she decided to publicly oppose it, her aides wavered on how to announce it and ultimately timed it so that it would take the focus off revelations about her email server.

"We are trying to find a good way to leak her opposition to the pipeline without her having to actually say it and give up her principled stand about not second-guessing the president in public," speechwriter Dan Schwerin wrote to Cheryl Mills, a top adviser.

The emails also confirm how extensive a role political considerations played in the formulation of Clinton's policy on financial reform. Longtime adviser Mandy Grunwald wrote that Clinton had been "leaning toward" supporting a reinstatement of Glass Steagall, the Depression-era law that was repealed under her husband's administration. Sanders and Elizabeth Warren had already called for bringing back a modern version of the law, and Grunwald was worried about the possibility that Warren might endorse Sanders.

"I understand that we face phoniness charges if we 'change' our position now—but we face political risks this way too," Grunwald wrote. Ultimately, Clinton did not back Glass Steagall and instead argued that her more targeted Wall Street plan was more workable than Sanders'—a position that, according to another email from Schwerin, represented her actual policy belief.

For the significant number of people who are fed up with typical politicians, these emails won't do Clinton any good. But at least in the batches released so far, they don't really contradict the campaign she's run.

Unlike her opponents in 2016, Clinton isn't promising a revolution, or to upend the system, or even really to change politics. She's just pledging to do it better. People might understandably be alarmed to read emails that the U.S. intelligence community believes were hacked by Russians to influence the election. Many of them might be discouraged to see, as Clinton herself acknowledged in a paid speech, "the sausage being made." But on the whole, they shouldn't be surprised by what's in them. Though anti-Clintonites on the right and left may find their suspicions about Clinton confirmed, there's nothing in the emails that would provide them new lines of criticism—or provide new sources of worry to her allies.