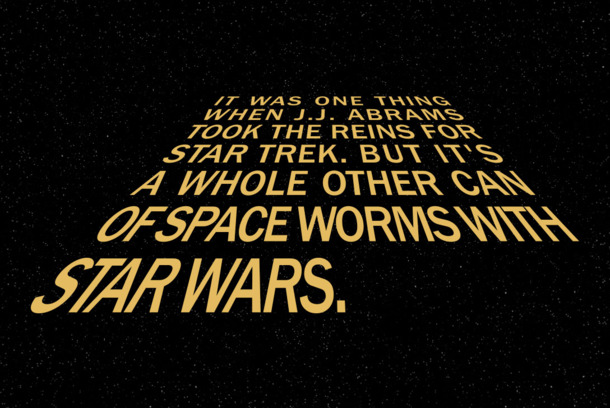 It was one thing when J.J. Abrams took the reins for Star Trek. But it's a whole other can of space worms with Star Wars. It's a movie franchise we never thought would be revived, for starters, plus fans have already gone through a major excitement–disenchantment cycle thanks to Episodes I, II, and III. And yet, here we are, hearts a-flutter with news that Abrams will be directing the next Star Wars. While we don't know where or when Episode VII is set, we do know that Toy Story 3's Michael Arndt is writing the script. And based on Abrams's body of work, we're guessing it could include these Abrams calling cards.

1. Characters making their own family
J.J. Abrams loooooves people hauling around emotional baggage who eventually decide that despite the heartache or frustration borne from their natural families, they can have a new kind of family! Together! Just them! Everything he's done, from Felicity through Star Trek and Super 8 fits this model.

2. "Mystery boxes"
The man loves mystery boxes, which are boxes whose contents you don't know. Anything could be in there! A light saber. A bantha horn. Truly anything.

3. Someone falling through and/or out of the sky
We've see this in Star Trek, MI:III, Lost, and even Star Trek Into Darkness, if the scenes in the trailers end up in the final film — "sky fall" is taken, but "Skywalker" is available. (And in the extended universe books, some Skywalkers actually do float/hover, so…)

5. The Day Everything Changed
A train crash, a plane crash, the first day of college. The day dad died. The day dad told the truth. Lots of Abrams stories are set off by some huge moment, forcing the characters to categorize their lives as before that happened and after that happened.

6. Dad stuff
Again, that was probably going to be in Star Wars no matter what. But Abrams tends to include father/child tales, too, mostly ones where an adult has to accept their absent/deceased father for who he was, even if that father failed in some capacity.

7. Time jumps
Abrams likes to move around in the timeline of a story with flashbacks and flashforwards. And Star Trek included literal time travel. Bring on the hyperspace!