This is the web version of VoxCare, a daily newsletter from Vox on the latest twists and turns in America's health care debate. Like what you're reading? Sign up to get VoxCare in your inbox here.

Now that the zombie American Health Care Act seems to be six feet under again — for the time being — we can get back to policy discussions about the real effects of health reform.

In a new book, An American Sickness, journalist Elisabeth Rosenthal laments medicine's quick transformation from a patient care system to a multitrillion-dollar business — one perverse incentive at a time.

One major failing: Even after the Affordable Care Act, there's an uninsured population in the US that's nearly as big as the population of Canada.

Since 2013, the number of uninsured Americans is down from 18 percent in 2013 to 11.9 percent in 2016 — but there are still nearly 30 million people living in America without health insurance.

"When you look at it from the perspective of much of rest of the developed world — to have 10 percent of population without good access to health care shows how far we still have to go," said Rosenthal, a doctor, former New York Times writer, and now the editor in chief of the nonprofit Kaiser Health News. (Return Monday for a Vox Q&A with her about the absurdity of the health system and its out-of-control costs.)

The size of the uninsured group is well-known, but less clear is what this group looks like. A new series in the Lancet on health inequality paints a pretty good picture. People who go without insurance in America are not refusing coverage for ideological reasons: They simply can't afford to pay.

Most uninsured Americans have yearly incomes that are near or below the poverty line ($11, 770 for an individual in 2016). "Among non-elderly adults, 7.6% of the non-poor were uninsured in 2015 compared with 25.2% of the poor and 24.1% of the near-poor," the Lancet reports. In other words, the poor and near poor were more than three times more likely to be uninsured than their higher-income counterparts.

And while the ACA's Medicaid expansion was meant to bring health care to people in poverty, 19 states opted out of the program, and Medicaid enrollees face barriers to access even in expansion states.

The other group that's less likely to be insured are people of color, according to the Lancet. "With respect to racial disparities, in 2015 the uninsurance rate among adults aged 18-64 years remained far higher for Hispanics (27.7%) and non-Hispanic blacks (14.4%) than for non-Hispanic whites (8.7%), showing that long-standing racial and ethnic inequalities have been attenuated but by no means eliminated."

The disparities in access to care are wider in the US than in other developed countries. "Before the 2010 passage of the ACA, which progressively expanded health insurance coverage, 39% of Americans with below-average income reported not seeing a doctor for a medical problem because of cost, compared with 7% of low-income Canadians and 1% of those in the UK," the Lancet reads. They're also linked to a big mortality gap: The richest 1 percent in America live up to 15 years longer than the poorest 1 percent.

The Lancet researchers don't think the kind of market-based reforms the GOP is pushing are the solution to the problem here, and point out they'll make inequality worse. Instead, they're siding with a certain American champion of universal health care: "A single-payer, Medicare-for-all reform — championed by Senator Bernie Sanders during his upstart presidential campaign, as well as by many physicians and the nation's largest nurses union — would, in our view, best address health-care inequalities." (Sanders makes an appearance in the Lancet, with an editorial.)

Rosenthal is more of an incrementalist. She doesn't think blowing up the system is realistic. "This system progressively got built one action at a time, the perversion of one incentive at a time," she said. To bring the US more in line with other wealthy countries — in terms of both cost and access — she thinks we need to unravel those perverse incentives, one small step at a time. 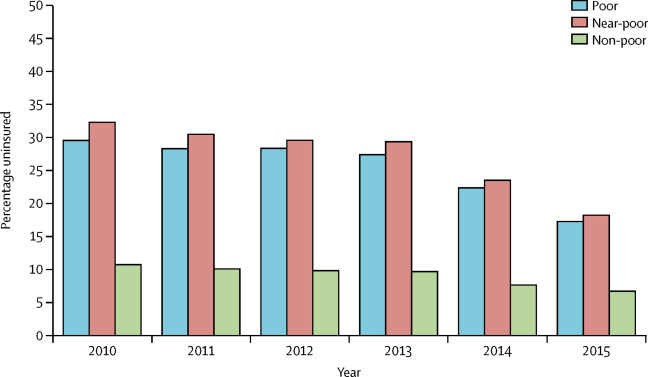 Here's what the uninsurance rates in the US look like by poverty status for people under 65. Two things to notice: This population has gotten smaller over the years, but it's still huge. And you can see that poorer Americans are much more likely to be uninsured than their wealthier counterparts.

With research help from Caitlin Davis