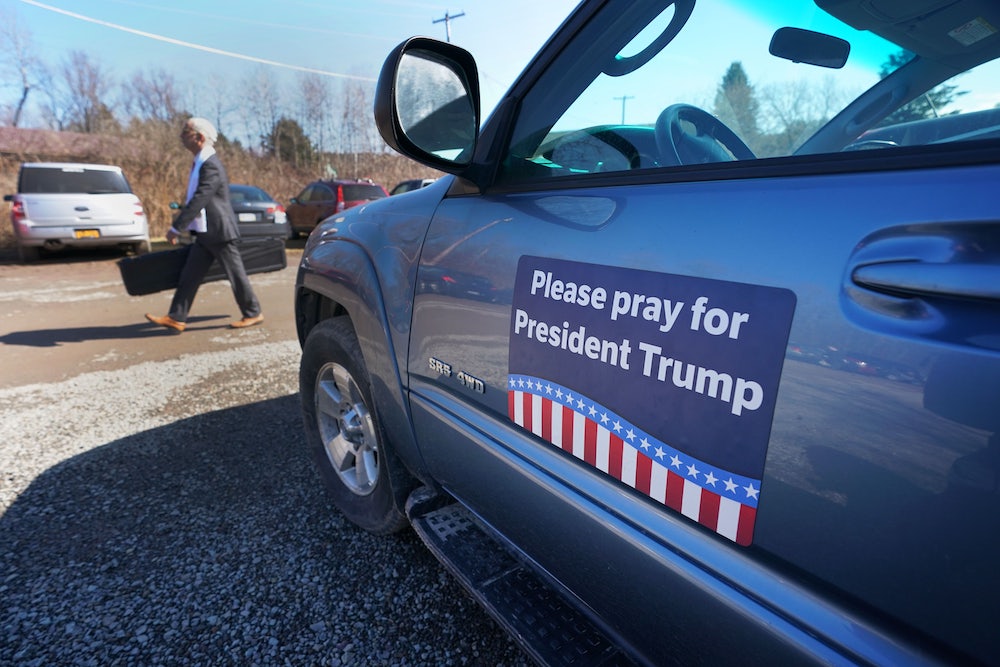 Evangelicals love President Donald Trump, as we all know. And every time a new poll shows evangelical support for Trump at a steady high, the commentariat wrings its hands. These Christians have fallen for a cut-rate King David, a charlatan Solomon, a false prophet. But the evangelical movement is not monolithic. America's megachurches aren't lined up neatly in a row, all marching to a Republican cadence. Evangelical support for Trump maps onto racial lines: He belongs to white evangelicals, who put their might behind his presidency.

However, white evangelical Protestants declined from 23 percent of the population in 2006 to 17 percent of the population in 2017, the Public Religion Research Institute has found. The decline can be partly attributed to the millennial generation's relative non-religiosity, but there are other factors at work. Immigrants are changing American politics, and they're changing American churches, too.

Janelle Wong, a professor of American studies at the University of Maryland and author of the new book Immigrants, Evangelicals, and Politics in an Era of Demographic Change, tells me that Latinos and Asian-Americans are key sources of growth for evangelical churches. And they differ from white evangelicals in certain key areas. "I think what's surprising is that non-white evangelicals, especially Asians and Latinos, sometimes show higher rates of religiosity, like they go to church more. Or they exhibit a more fundamentalist kind of orientation," she explained. "And even though they show higher levels of religiosity, they are much less conservative on almost every issue, except for abortion."

On climate change, Black Lives Matter, and immigration, non-white evangelicals have little in common with their white brothers and sisters in Christ. Trump didn't just accelerate an identity crisis in his party, which faces its own future demographic challenges—he also created the same problem for one of the party's most loyal factions. White evangelicals are ascendent now, but is the Trump era their last hurrah?

In the ecosystem of American politics, the white evangelical is a well-studied creature. His habits make headlines. We know that he usually attends church at least once a week, and that it's also common for him to attend two to three services a week. He usually opposes abortion rights and same-sex marriage rights. He probably believes God created the world in seven days. He may refer to himself as being "born-again" or he might not, but ask him if he thinks the Bible is God-breathed revelation to be interpreted literally by believers, and he will usually say yes.

But gulfs can separate a tradition's agreed-upon doctrine from the practices of individual believers. For example, most Catholic women in America say they've used hormonal contraception, even though it directly contradicts the clear teachings of their church. For Protestants, these discrepancies can be particularly pronounced. If all believers are priests, charged with working out their own salvation, then doctrinal divisions will necessarily proliferate. Factor in "Christian liberty"—the idea that two Christians can disagree on some points of doctrine without committing heresy—and the matter becomes even more complicated. What is heresy to one evangelical could be orthodoxy to another.

Thus, the Republican conundrum. How can a group call itself "pro-life" and decline to support a more affordable health care system? The answer is doctrinal as well as political. Some conservative evangelicals believe that the Bible advocates against abortion and for small government. There are reams of books and entire universities dedicated to promoting this exegesis. That this interpretation mirrors the political priorities of conservative white voters is no accident. In the case of the Christian right, the line between political cynicism and religious conviction has always been thin.

And now it's even thinner. "If you took evangelicals at their word in the 1990s and early 2000s, around the election of George W. Bush and in their reaction against the presidency of Bill Clinton, you saw them branding themselves strongly as values voters," explained Robert Jones, president of the Public Religion Research Institute and author of The End of White Christian America. Central to the value voter's identity was (ostensibly) a preference for applying the standards of Scripture to each individual candidate. "But what has happened is that white evangelicals have really turned that on its head and have exchanged an ethic of principle for a utilitarian ethic where the ends tend to justify the means," he added. Post-Trump, the transformation of values voter to political utilitarian may be complete.

Within this moral void, other Christian voices can gain purchase. The Christian Left has begun to mobilize, and with the launch of the Poor People's Campaign, it is becoming more prominent than it has been in decades—a legible evolution of the work many liberal Christians have carried out in relative obscurity for a long time. The Sanctuary movement encourages churches to open their facilities to immigrants seeking protection from Immigration and Customs Enforcement, and it straddles political lines; some participating churches lean left, and others do not, but all diverge from the Christian right's party line.

Consider that statistic against others: Americans under 30 are more likely to be non-white, more likely to support abortion rights and same-sex marriage, and more likely to be critical of both the Republican Party and Donald Trump. The risks of white evangelicalism's political gambit are clear. As Mark Yarhouse of Regent University recently told The New York Times, fully 80 percent of LGBT students at Christian colleges rejected the notion that their religious identities and sexual orientations were somehow incompatible. "Very few reject one in order to have the other," Yarhouse said.

But evangelicalism's changes aren't necessarily good news for Democrats, let alone the broader liberal-left. White evangelicals turn out to vote. The marriage of Republican politics to evangelical doctrine got voters out of the pews and into the voting booths. It may still be decades before the movement's changing racial demographics influence voting patterns, partly because voter turnout among white evangelicals is steadily strong. "I think it's an open question whether the evangelical response to Trump is a blip or a permanent sea change," said Jones.

The GOP, with the help of its Christian allies, also directly suppresses the votes of their non-white peers: Gerrymandering, voter ID laws, and general anti-immigration sentiment all occupy starring roles in the Republican Party's contemporary handbook, and all target Americans of color.

Further, even if non-white evangelicals do increase their turnouts and begin voting more regularly, they don't always have an obvious political home. "Right now I don't think either party has really sealed the deal with these groups," Wong said. Non-white evangelicals remain largely committed to anti-abortion politics; their views on same-sex marriage are mixed. Immigration is the likeliest wedge issue.

"What we're seeing is that on the right, the rank-and-file white evangelicals aren't really interested in moving positions in terms of immigration reform," she added. The white evangelical has entered its latter days, and the bloc's support for Trump can be seen as a reaction against the inevitable. "I had expected that white evangelicals, especially the leadership, would maybe modify its agenda to accommodate some of these new sources of growth," she said. "But the opposite happened. That demographic change actually created a lot of anxiety, I think."

Each party now faces distinct difficulties. Republicans can't survive without the support of their white base, which binds them, for now, to the grievance politics that put Trump in office. Democrats can't surrender ground on reproductive justice or same-sex marriage, yet their immigration policies should make them attractive to the coming wave of non-white evangelicals. White evangelicals, in the meantime, find themselves in a trap of their own creation. In so many respects, their grip on American politics appears doomed—by the xenophobia they have embraced, and the young adults they've failed to retain.