What's the Most Popular Time of Year to Get Married? 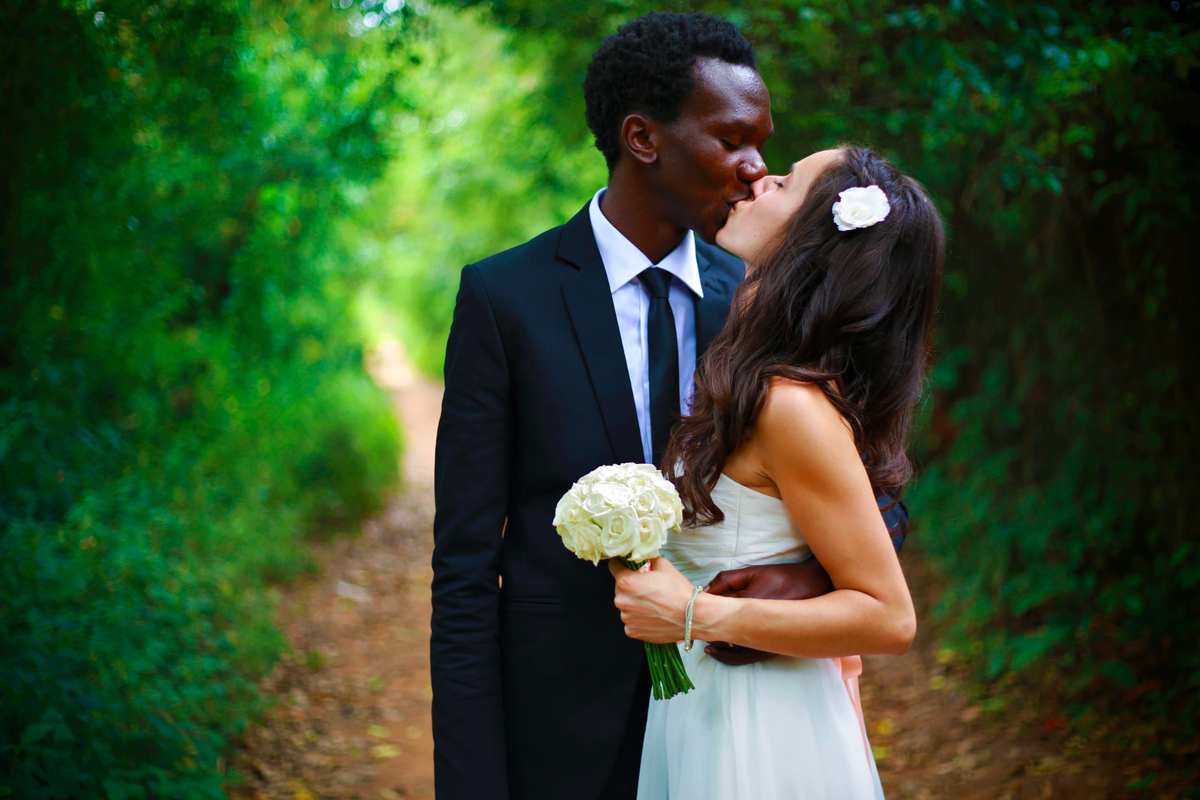 Picking a wedding date is likely the single biggest planning decision a couple will make in their lives. The chosen date impacts the expense of the ceremony, venue possibilities, and the plans of possibly hundreds of people.

The conventional decision it to pick a Saturday in the warmer months of the year. And, if possible, to grab a three day weekend like Memorial Day or Labor Day.

But, of course, not all couples can or want to pick a traditional date. Some people have always dreamed of a winter wedding, while others are just looking for cost savings on this now exorbitantly expensive event.

Just how unusual is it to get married on a Friday or in the depths of winter? We collected data to find out.

Over the last several years, hundreds of thousands of couples use the website The Knot to create a wedding page for their big day. On this free wedding page, couples are required to list their names and the date and location of their wedding. Most of the pages are public.

In order to figure out the popularity of different nuptial dates, we collected the location and day of over 40,000 weddings listed on The Knot. Though these data are probably not a perfectly representative sample of American marriages—people who set up websites could be different than the general population—it's probably pretty close.

So when do people get married? Let's start with the day of the week. The data is restricted to marriages in the United States in 2015. 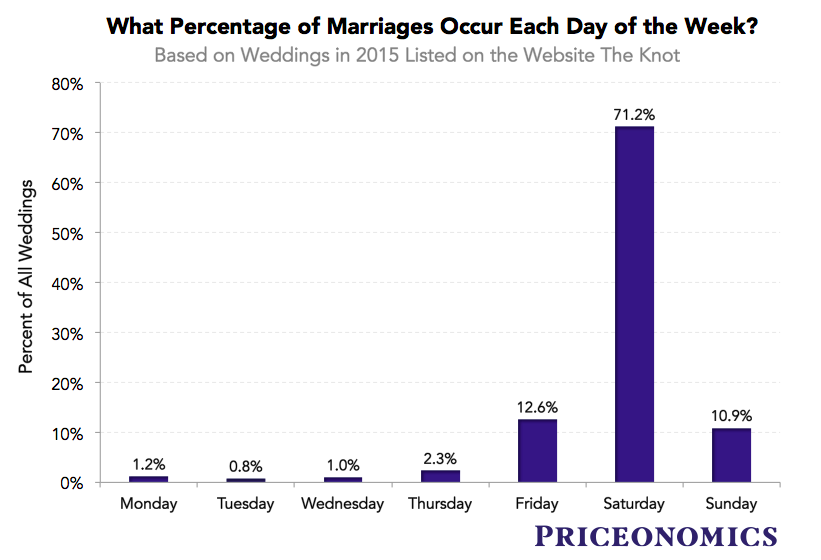 According to the data we collected, over 70% of couples got married on a Saturday in 2015, and nearly 95% of weddings occurred on a Friday, Saturday or Sunday.

About one quarter of the nearly 11% of weddings that occur on Sunday happened on one of three holidays weekends: Labor Day, Memorial Day, and Columbus Day (in some places known as Indigenous Peoples' Day). The Sunday of Labor Day weekend is the most common Sunday, but still ranks 28th overall—all 27 above it are Saturdays.

Though historically taboo, Friday night weddings may be becoming more popular as a way to save a ton of money. The main drawback is that you might annoy friends and family by forcing them to miss a day of work.

Beside choosing the day of the week, the other key decision couples make is picking the week of the year. The following chart shows the most popular wedding weeks across 2015.

Our data show that just about 80% of all weddings happen in the six months between May and October. About two thirds of the weddings in these months happened on a Saturday, so put together, only a little over half of weddings occur in the warm weather months on a Saturday. If you had a cold months or non-Saturday wedding, you are not as unusual as you might think.

The following table shows the top ten days in

But the popularity of particular times of the year varies significantly by region of the country. The following chart shows the popularity of weddings by month across the United States' four different regions as defined by the Census. 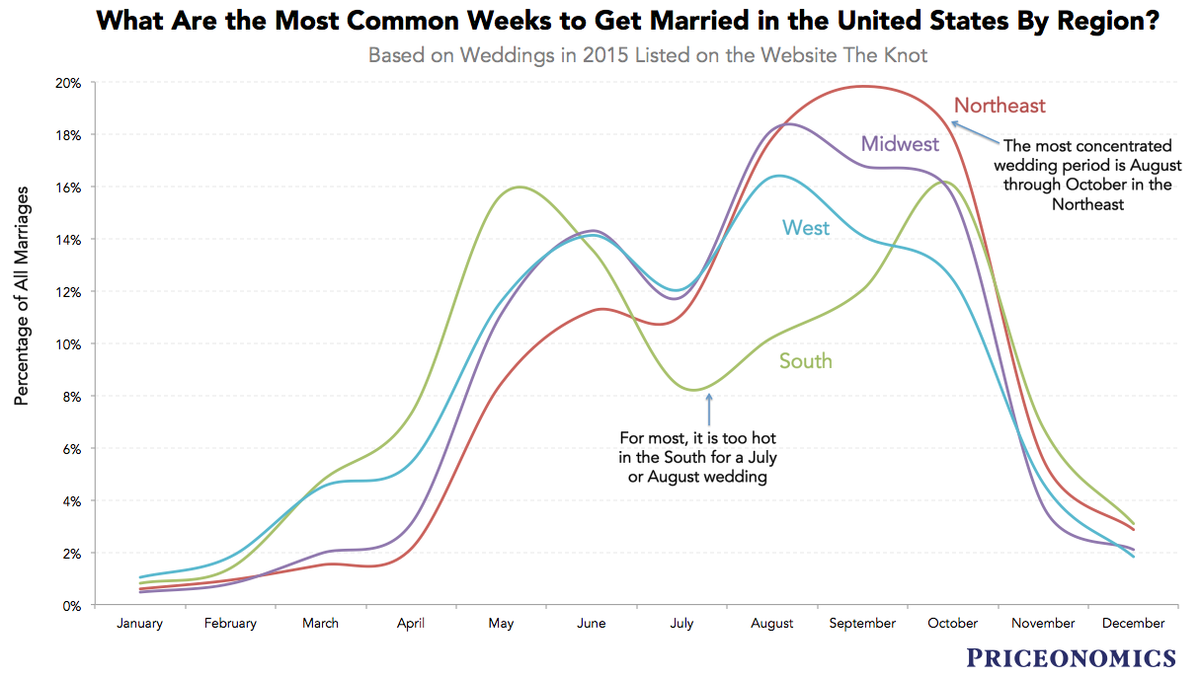 Couples doing their nuptials in the South differ in their choice of wedding dates more than any other region. While September and October are the most popular wedding months throughout the rest of the country, in the South, April through June dominate. This is mostly because most Southern couples avoid the sweltering months of July and August.

The most concentrated wedding season for any region is August through October in the Northeast. More than 56% of all marriages in that part of the U.S. occur in just those three months.

November through February is almost universally unpopular across the country. Even with the good weather during this period in much of the West and South, not many couples choose dates in these months. The resistance to choosing dates in this period is likely to due to some combination of not wanting to compete with the holiday season and leftover tradition from when most Americans lived in the colder parts of the country.

Finally, we examined the most popular wedding week for every state. These are the weeks that are either to be grabbed very early or to be avoided.

Though most Americans clearly prefer to get married on a Saturday in the warmer months, the popularity of wedding dates are scattered throughout the year and depend on where you live. But almost everywhere, for those who have already been to their fair share of wedding this year, rest assured that the peak of nuptial season is finally coming to an end.

Our next article explores where teachers are supposed to live in the ultra expensive Bay Area housing market? To get notified when we post it  →  join our email list.

Get your ticket here.