This winter was really, really cold. Outside of drought-stricken California, most of the U.S. suffered a severe and snowy winter. Temperatures in some states were briefly colder than the surface of Mars.

What's Up With That

Each week, we'll explain the science behind a strange phenomenon that you may be wondering about, or may be hearing about for the first time right here. If you've seen or heard of something you'd like us to explain, let us know in the comments.

Mixed in with all the media stories about the polar vortex and its blame in this deep freeze was a short-lived meme: Folks showing off just how cold it was outside by throwing boiling water out of a pot into the air and watching it transform into powdery ice. (Warning, this has also led to injuries). Local TV news reporters were especially fond of this trick.

Part of the fascination with this experiment is that the air is so cold that even extremely hot water immediately turns to snow. This is presumably more impressive than cold water freezing as quickly. Turns out the exact opposite is true.

Certainly some of the effect, regardless of the temperature of the water, is due to the fact that throwing it into the air spreads the water out and exposes more of its surface to the cold, allowing it to quickly freeze.

But there's another extremely bizarre effect going on that deserves a closer look: Something about hot water makes it freeze faster than cold water.

This counterintuitive phenomenon is part of a 2,000-year-old mystery, having been observed throughout history by scientists such as Aristotle, Francis Bacon, and Rene Descartes. It has the modern name of the Mpemba Effect, named for Erasto Mpemba, a Tanzanian high school student with an interesting story. In 1963, Mpemba's class was dissolving sugar in boiling milk to make ice cream. Before churning, cooks are generally supposed to cool the milk but Mpemba was impatient and put his concoction in the churner while still hot. To his surprise, he found his ice cream formed faster than any of his classmates. His teacher didn't believe him and told him he must have been confused.

When a professor of physics later came to visit the class, Mpemba asked him if it was possible for hot things to freeze faster than cold ones. The professor didn't believe him either but, together, they performed an experiment. They put two glasses of water, one at 95 degrees Fahrenheit and the other at boiling, in a freezer and noted that the hotter one turned faster to ice. They published a paper on the experiment in 1969. The result has since been replicated many times, though it doesn't always work and depends on the relative temperatures of the two liquids.

How Does It Work?

What causes the Mpemba effect is a major headscratcher. Over the years, scientists have come up with various explanations. None has been entirely satisfying.

The leading explanation for this strange phenomenon is fairly straightforward. Hot water evaporates more than cold water. As boiling water cools down, a small amount of its mass is turning to steam and floating away. Hot water freezes faster than colder water simply because less of it has to turn into ice. If you've ever been to a hockey game and saw officials smoothing the ice on the rink, you might have noticed that they dump hot water, not cold, on the ice to take advantage of this effect.

So problem solved? Not quite. Though calculations have shown that evaporation can account for some of the Mpemba effect, it can't be the only mechanism. Mpemba himself measured the mass of water lost to evaporation in his original experiment and found that it was insufficient to explain his outcome. Several other ideas, such as dissolved gases changing the water's freezing point or that the water's surroundings could influence the results, have been put forth as well. But most of these only apply in a limited set of cases.

Another interesting attempt to explain the Mpemba effect came in October, when a team of researchers suggested that the answer lies in water's wacky chemistry. You probably know that water is formed from one oxygen atom covalently bonded to two hydrogen atoms (in covalent bonds the atoms share an electron). Because the oxygen is more electronegative, it clings to the molecule's shared electrons more tightly than the hydrogen, creating a slight positive charge on the "Mickey Mouse ears" of an H2O molecule. The oxygen gets a slight negative charge from this as well. Hydrogen bonds form between different water molecules as the positive hydrogens of one molecule become attracted to the negative oxygens of another. 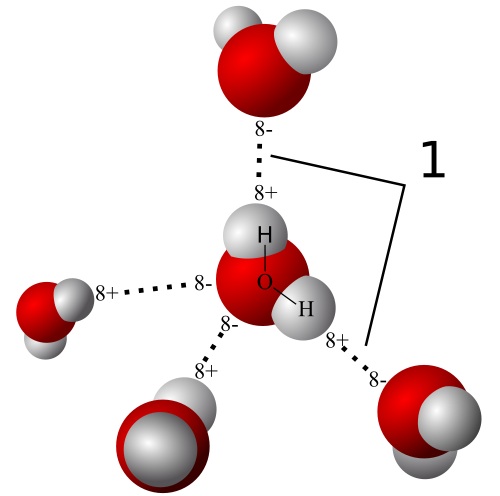 Hydrogen bonds are responsible for a lot of water's strange properties, such as the fact that it becomes less dense when frozen. And they may also explain the Mpemba effect. As the temperature goes up, the water molecules naturally spread out a bit, lengthening the hydrogen bonds. The water is inside a limited volume so the expanding hydrogen bonds push the covalent bonds between the hydrogen and oxygen of individual molecules, causing them to shrink and tense like a spring. Ticking up the temperature is equivalent to tightening this spring. Near boiling temperatures, the covalent bond spring has been pushed to its maximum compression, storing a great deal of energy. If you freeze water in this state, the spring is released and the energy sproings out. And as things lose energy, they cool down.

A highly compressed spring will rebound faster than one that's slightly less compressed. Similarly, the covalent bond of boiling water will release its energy faster than that of lukewarm water, potentially explaining why hot water can cool down faster than colder water.

This explanation has yet to be published in a peer-reviewed journal and, though intriguing, doesn't have strong support in the scientific community. When we talked to chemist Richard Zare of Stanford University, he was unconvinced of its merits and said he thinks the dominant force at play is evaporation.