Are commuters changing how they value their minutes? A new study of time/cost trade-offs between transit, Uber, and Lyft is a hint.

Time is a precious and nonrenewable resource. Lose it or save it, and you can't trade it in for something else. But time can be traded off, depending on how you value it. And when it comes to the time we spend traveling, that value is in flux.

For example, it seems that more transit riders in major U.S. cities are making a clear choice with their time and money, as mounting evidence indicates that Uber, Lyft, and other transportation network companies (TNCs) are drawing them off buses and trains and into their backseats. Riders are choosing to shell out more for a speedier TNC journey where they can enjoy not having to drive.

But Uber isn't always the faster choice, as anyone ever caught in a thicket of traffic after a rush-hour ride-hail knows. Sometimes other trade-offs are more important. A recent study by Joseph Schwieterman and Mallory Livingston, the director of the Chaddick Institute for Metropolitan Development at DePaul University and a DePaul graduate researcher respectively, examines when and why consumers choose an on-demand ride—or indeed a carpooled on-demand ride—over public transit in one major American city.

Between November 2017 and March 2018, Schwieterman, Livingston, and a group of researchers gathered data on 610 different journeys around Chicago. For each possible origin and destination, they compared the cost, duration, and convenience factors between five options: Lyft, Lyft Line, Uber, UberPool, or Chicago Transit Authority. That added up to a sample of 3,075 trips, collected by searching the apps and the fastest transit travel estimate on Google Maps. To keep as many variables constant as possible, most of the trips either started or ended on the city's north and northwest sides, and about 60 percent passed through downtown. All the trips were between 4 to 11 miles, the range within which Uber and Lyft compete most for transit riders.

Depending on the geography of the trip requests and the time they made them, the performance of the options varied dramatically. Here's what the researchers found.

Unsurprisingly, in sheer dollar terms, it was essentially never more cost-effective to ditch transit. The average CTA fare is $2.69, while Lyft and UberX rides averaged $18.13 and $17.90 respectively. Notably, riders who chose a carpool option for an on-demand ride spent a lot less when they rode UberPool than Lyft Line—those trips cost an average $9.33 and $14.04, respectively.

Outside of crowded downtown Chicago, TNC options were almost universally faster than transit trips. Compared to riding trains and buses, more than 90 percent of trips were faster on TNCs, with the exception of UberPool, where just 66 percent of trips were faster. The skimpier time savings on UberPool rides can be attributed to the same reason that it was cheaper than Lyft Line: Uber usually draws more people piling into the same vehicle.

For trips that passed through the downtown zone, TNCs were still faster, but the gap narrowed substantially: 60 percent of Lyft Line trips and 41 percent of UberPool trips were quicker than public transit. Compared to its performance in outer-urban areas, transit was a more competitive option there—faster than TNCs about half the time.

When is it worth it?

Did you know that the U.S. DOT has an official metric for what it considers valuable time-savings for commuters? In 2018 dollars, an hour of time savings is worth $14.95, by federal standards. That number is used by transportation planners to assess whether transportation improvements such as road widenings and service extensions are micro-economically worthwhile.

In those terms, although Lyft and UberX trips tend to save travelers considerable time over transit, only a small share of them met that cash value standard. For example, Schwieterman and Livingston write, an UberX trip that saves about 15 minutes of travel but costs $17 more than a CTA trips works out to spending about $68 per hour, or about $1.13 per minute, of travel time saved. That means the rider is paying more than four times the cash value of that hour, at least according to the DOT. Across trip geographies, less than 1 percent of Lyft Line rides, 4.9 percent of UberPool trips, and 0.2 percent of the private-ride TNC options met the $14.95 savings standard.

The worse the bus ride gets, the "cheaper" the on-demand car ride becomes.

Virtually none of the downtown trips were worthy by this metric, either. The cost-effectiveness of TNCs was considerably better for traveling between neighborhoods, especially on Lyft. But, for riders who value their time at roughly the rate of the federal government, transit was essentially always the winner.

So if they're bleeding cash to ride, why are so many consumers jumping ship (and bus) for Uber?

Clearly, time isn't the only factor under consideration when choosing a travel mode. Maybe it's raining, or late, or your shoes hurt and you don't feel like walking. Passengers might overvalue the convenience and perceived safety of one mode or another. Then there's the cost of uncertainty: Transit trips can be unpredictable, and there are wait times and transfers to consider.

To account for some of the most significant non-monetary expenses of travel, Schwieterman and Livingston estimated the total "generalized cost" of each mode. They did this by assigning a dollar value to every minute spent walking, transferring, and waiting for rides, as well as in-vehicle travel time, for the trips in their sample set. They also compared these costs to different levels of service quality on transit, which are rated on the graph below on an A-F scale. (This methodology was adopted from earlier research by the Victoria Transport Policy Institute.) 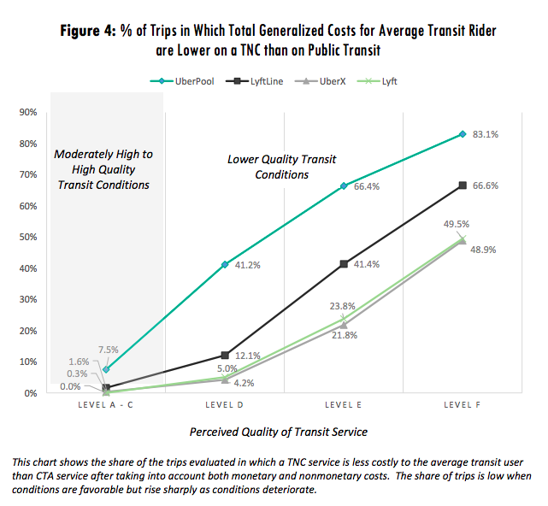 As the level of service quality gets worse, a higher percentage of Uber and Lyft trips becomes cost-effective. (DePaul University)

The gist: the more comfortable, quiet, and predictable a bus or train journey is (i.e., the closer to transit quality levels A-C), the more cost-effective taking transit would be compared to a TNC. But as transit service degrades—if, say, the weather is terrible, if crowding is bad, or the rider perceives the route to be unsafe in some way—the more cost-effective taking a TNC becomes, especially UberPool. In other words, the worse the bus ride gets, the "cheaper" the on-demand car ride becomes.

Still, in many instances in the Chicago sample, riders were essentially spending more than $50 per hour saved by riding Uber or Lyft. The average commuter probably wouldn't be able to justify that expense, at least not solely on the fact that it's a few minutes faster. UberPool is a little easier to justify, cost-wise. But for many riders who don't have endless money to burn, TNCs are probably out of reach a lot of the time. Public leaders and tech enthusiasts shouldn't jump too quickly to the conclusion that these companies are putting transit out of business overnight.

This model makes a number of assumptions—namely, that everyone values their time at equal rates, which they don't. To that end, the analysis could be adjusted to reflect batches of riders who value their time more highly than the federal baseline. It could also take into account fare increases on CTA, or higher opportunity costs for people who really hate to walk.

But the analysis is mostly meant to demonstrate, in numbers, the range of factors and inflection points where riders are drawn off buses and into Ubers, something intuitive yet difficult to pinpoint. As private mobility services dump more cars on the road and likely add to congestion, the question of how and whether to regulate them continues to torment city governments. Today in London, Uber is in court appealing the city's decision to revoke its operating license, while in New York City, TNC drivers are furiously protesting regulators' attempts to establish vehicle licensing fees.

It's no comprehensive solution, but at least this study offers hints about how cities could work with private transportation providers while still suppressing adverse effects on traffic, Schwieterman and Livingston write. For example, agencies like CTA could subsidize TNC rides in outer-urban neighborhoods at times when bus service has sharply dropped, similar to what Pinellas Suncoast Transit Authority in South Florida and the Southeastern Pennsylvania Transportation Authority have done. 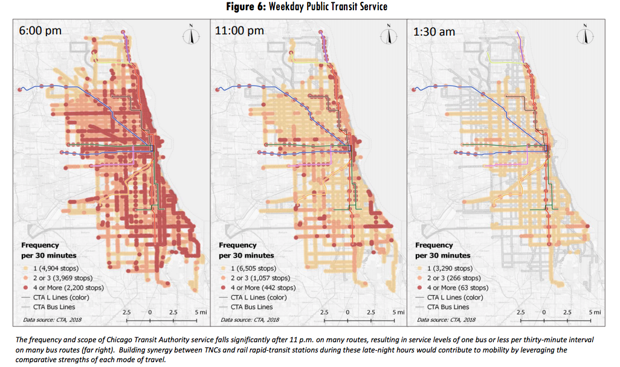 In well-off cities, transportation options seem to be expanding every month. Uber and Lyft are older news; dockless bikes and scooters are here; aerial taxis and autonomous shuttles are edging onto the horizon. What ride-hailing services are already doing to cities may be a worst-case harbinger of what driverless vehicles will bring: less support for public transportation, more congestion, and indeed more travel overall, as the disappearing need to physically operate vehicles removes a major inconveniencing factor. That also means how we value the time we spend traveling will change, as Patricia L. Mokhtarian, a professor of civil and environmental engineering at the Georgia Institute of Technology, has observed in extensive research. Already, there is evidence that Millennial travelers value the travel time saved by riding one mode over another less than older generations, chiefly because they're so accustomed to using laptops in the backseat.

As more travel options become available to riders, the experience of travel may prove to be more important than how long the trip takes.

For decades, around the world, people have tended to spend 60 to 90 minutes per day on moving from place to place—the heftiest time allocation to any activity after work and sleep. But as work, travel, leisure, and rest become untethered from the discrete locations where they once took place, it is becoming harder to say how our time is apportioned, and therefore how we should value it. And Schwieterman and Livingston's study suggests that as more travel options become available to riders, the experience of travel may prove to be more important than how long the trip takes.

That might be food for thought for transit agencies losing riders to service cuts and TNCs. No, maybe it's not their job to serve every business-class traveler who demands a USB plug and WiFi connection. Plenty of transit riders, if not most, don't "need" these kinds of amenities—they'd like more frequent, more reliable service. But travel time also isn't just for travel anymore. It's time that is and could be used, not merely spent.

Laura Bliss is a staff writer at CityLab, covering transportation, infrastructure, and the environment. She also authors MapLab, a biweekly newsletter about maps that reveal and shape urban spaces (subscribe here). Her work has appeared in the New York Times, The Atlantic, Los Angeles, GOOD, L.A. Review of Books, and beyond.