U.S. millennials are quick to whip out their wallets for pricey avocado toast and craft beer. But when it comes to rewarding the waiters and bartenders who serve them, those wallets often stay closed.

Ten percent of millennials don't tip at all when dining out compared with only three percent among the older generations, according to a study released Monday by CreditCards.com, an online credit card marketplace.

And those millennials who do tip at restaurants tend to leave a median gratuity of 15 percent, less than the overall average. Gen-Xers, baby boomers and the oldest Americans, the so-called Silent Generation, are more generous, leaving between 18 and 20 percent.

"It was interesting to see that millennials are the worst tippers—because the typical restaurant worker is a millennial," CreditCards.com senior industry analyst Matt Schulz said in an interview. "It's self-defeating." 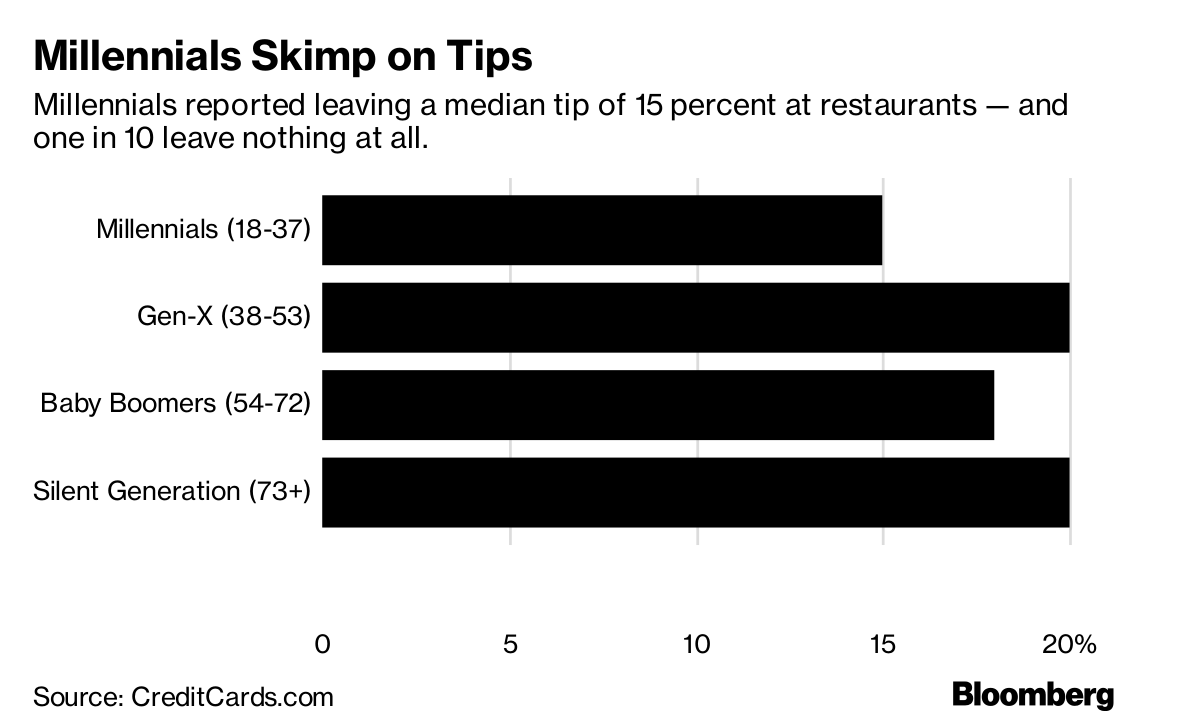 The study was conducted for CreditCards.com by market-research firm GfK, which gathered data last month from 1,000 Americans aged 18 and older. Millennials were defined as between the ages of 18 and 37.

Beyond those poor waiters, taxi drivers and baristas fared even worse with their millennial customers. Apparently even the suggestion that a tip is expected puts some of these young people off. Eighteen percent of millennials surveyed said they typically decline to leave any amount when presented with pre-entered tipping options—say if they're in a taxi or taking a Lyft or Uber.

Why are these American youth, many of whom work in tip-reliant industries, so cheap? The answer may be economic. "Millennials' financial struggles are a big reason they tip less," Schulz said.

But other data point to a more cynical explanation. Millennials do tend to spend more of their disposable income eating out, according to 2017 data from Merrill Lynch. After all, that tip can pay for dessert.

But twenty and thirty-somethings aren't the only skinflint demographic. Men, southerners, westerners, parents with young children, lower earners and the less educated said they tip less in restaurants than the overall median of 18 percent, according to the study.

Who, then, leaves the largest tips?

The study found people who are college educated, over the age of 65, from the Northeast and Midwest, and women all reported leaving a median of 20 percent—an above average tip.