No other vegetable has been as maligned as the tomato (and it is a vegetable, by order of the United States Supreme Court). We call tomatoes killers. We call them rotten. We call them ugly. We call them sad. To find the reason why, you have to go back to the 1500s, when the humble fruit first reached European shores (and it is a fruit, by scientific consensus). Through no fault of its own, the tomato stepped into the middle of a continent-wide witchcraft panic, and a scientific community in tumult.

Between 1300 and 1650, thousands of Europeans (mostly women) were executed for practicing witchcraft, in a church-and-government-sanctioned mass hysteria academics call the "witch craze." Women were burned, drowned, hanged, and crushed after trials in both secular and religious courts; and lynched by vigilante mobs. By the most conservative estimate, Dr. Ronald Hutton's count of execution records, between 35,184 and 63,850 witches were killed through official channels—at least 17,000 in Germany alone. Sociologist Nachman Ben-Yehuda estimates the combined death toll could have been as high as 500,000. It was a massive, concerted, prolonged crusade.

At the time of the tomato's importation around 1540, diligent witch hunters were particularly interested in discerning the makeup of flying ointment—the goo witches smeared on their broomsticks (or on themselves, pre-broomstick). This potent magical gunk did more than enable airborne meetings with the devil; it could also transform the witch—or her unwilling dupe—into a werewolf, as described in case studies by prolific witch-hunter Henry Boguet, who noted that witches particularly enjoyed becoming werewolves in order to attack the left sides of small children, and to stalk through cursed and withering cropland.

The key ingredients, recorded by the pope's physician Andres Laguna in 1545, were agreed by consensus to be hemlock, nightshade, henbane, and mandrake—the final three of which are the tomato's close botanical relatives. Why any woman would keep this ointment around in such a dangerous climate, we can only speculate; the best guesses are drug addition, atropine-based painkiller, and they didn't. In contrast, tomatoes' similarity to deadly nightshade is plain to the untrained eye: the plants are practically identical. And although tomatoes were clearly edible—the Aztecs ate them, after all— it's hard to tell the difference between yellow cherry tomatoes and hallucinogenic mandrake fruit.

Then as now, the overlap between people suspicious of new foods and people suspicious that an adventurous neighbor might be a servant of the devil was pretty high. Try a tomato and risk turning into a werewolf, or being branded a witch? No thank you. Tomato eating was best left to places like Spain, where the Spanish Inquisition had at least temporarily declared belief in witchcraft (and therefore accusations of witchcraft) heretical.

But even men of science—men who would never believe in something absurd like magic—found the tomato exasperating. Until the Enlightenment took hold, botanists relied on a thousand-year-old categorical framework established by Galen, a physician who lived in Ancient Rome. When new and unfamiliar American plants arrived—corn, blueberries, chocolate—naturalists didn't know what to do. They scrambled to figure out ways the new imports were actually old plants that could slot into the existing system. The alternative was terrifying: accepting that the great Galen had never heard of these plants would imply, as David Gentilcore describes in Pomodoro, that the ancients hadn't known everything; that perhaps the world was in some sense unknowable; that the Garden of Eden hadn't existed.

Given the tomato's similarity to an existing plant—nightshade—it could have escaped the controversy. However, bits of Galen's writings referred to plants or animals whose identities had never been nailed down, and American arrivals seemed like candidates to fill the gaps. One such mystery plant was the λυκοπέρσιον, which translates to wolf-something—maybe "wolf banisher." It transliterates to "lycopersion," but during the Age of Exploration was mis-transcribed as "lycopersicon": wolf peach.

Galen describes it as a poisonous Egyptian plant with strong-smelling yellow juice and a ribbed celery-like stalk. At least as early as 1561, Italian and Spanish botanists, no doubt aware of witchfinders' werewolf suspicions, were kicking around the idea that the wolf peach and the tomato could be one and the same.

This classification was controversial. Not only was the tomato far from poisonous, but as naturalist Costanzo Felici observed in 1569, it couldn't have come from ancient Egypt and Peru. As seed traders waited for the vernacular to establish itself, their manifests might list tomatoes as golden apples, Peruvian apples, love apples, wolf peaches, and more.

The name stuck, Tournefort's treatise was definitive, and his definition dovetailed with existing beliefs, especially in England, where physicians had dismissed the tomato as unworkable. According to James I's apothecary John Parkinson, though tomatoes could "coole and quench the heate and thirst of the hot stomaches" in places like Spain, Italy, and the Caribbean, England was already clammy enough. Eat tomatoes in a cool, rainy climate, and you'd find yourself on the wrong side of the medieval equivalent of "feed a fever; starve a cold."

English barber/surgeon John Gerard had gone so far as to say tomatoes were "corrupt" in his 1597 Generall Historie of Plantes. "Rank and stinking," he clarified, in case a reader was tempted by the Spanish and Italian recipes he included (fried with salt and pepper, or eaten raw with vinegar).

Much of the English population agreed, as did their descendants in what would become New England. Tomatoes were pretty, but gross and just maybe satanic even according to scientists. Adventurous eaters like Thomas Jefferson were welcome to partake, but the rest of us were better off not risking our stomachs. A contingent of English emigrants in America rejected tomatoes all the way up to 1860, when the U.S. Civil War finally mainstreamed tomato-eating—an aversion that gave rise to the medical shorthand "the tomato effect," a description of effective therapies avoided for cultural reasons.

That's not quite the same as a culture-wide belief that tomatoes were poisonous, which probably never occurred. Andrew Smith, author of The Tomato in America, could only locate three references to tomato deadliness in his survey of pre-1860 American literature—and in all of them, the authors insisted they themselves weren't afraid. The most prolific American anti-tomato lecturer was a Harvard-trained doctor named Dio Lewis, who spent the 1850s blaming tomatoes for everything from bleeding gums to hemorrhoids—because, he argued, tomatoes' medicinal powers were so strong it was easy to overdose. For the most part, the people who didn't eat tomatoes just didn't like them, in the same way most of us don't make dandelions and ants a staple of our diets.

But it's hard for facts to get in the way of a well-established superstition. One contemporary urban legend ties the tomato to a rash of lead poisoning—acidic tomatoes leeching the lead out of pewter dinnerware to drive 16th-century aristocrats mad—but tomatoes aren't acid enough, pewter dishes were never common enough, and lead poisoning accumulates too slowly to be linked to a specific meal. In another frequently-repeated tale, debunked by Joan R. Calahan in 50 Health Scares That Fizzled, Colonel Robert Gibbon Johnson astonished a crowd in Salem, New Jersey with his brave ability to eat a basket of tomatoes and live. There's even a fabricated story that George Washington's chef tried to poison him with tomatoes. 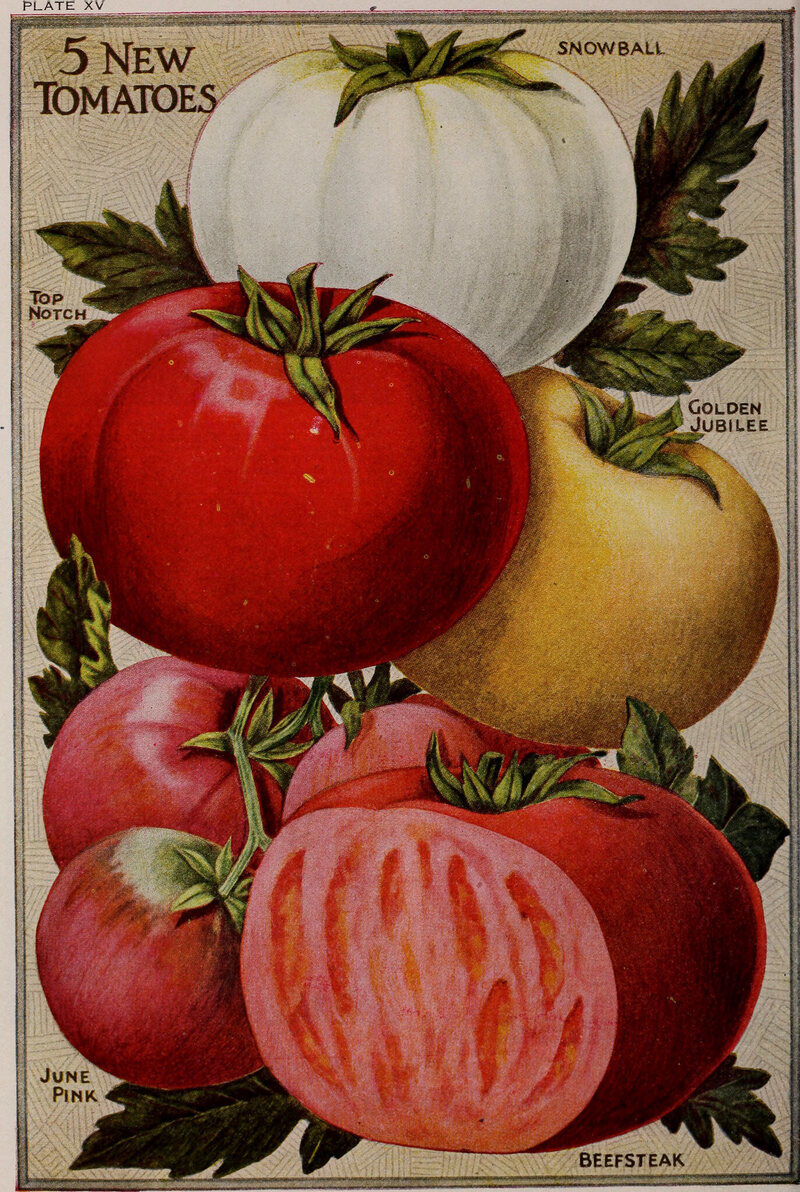 More recently, when NASA distributed tomato seeds that had been to orbit, the L.A. Times freaked out about the imagined potential for poisonous mutations, and the panic went international. When NASA did the same with basil, nobody cared.

A lawyer from my hometown of Winchester, Massachusetts told me a few years ago that there was a law on the books banning tomato gardens—an artifact of early 20th century anti-Italian racism, meant to keep the neighborhood cleanly Anglo-Saxon. A search through the town clerk's annual reports from the town's founding to the present makes it clear no such bylaw ever existed. But my lawyer believed it did, just as many law blogs happily (and inaccurately) report that the General Laws of Massachusetts forbid putting tomatoes in chowder.

My lawyer didn't realize she was repeating a werewolf myth, done up in sheep's clothing. It slotted Massachusetts zoning codes into an older story of Puritan sumptuary legislation which regulated minute personal behaviors and set the stage for the Salem Witch Trials, and it replaced werewolves with southern Italian immigrants—who were, according to bigots in the early 1900s, dangerously swarthy, overly sexual, unpredictably violent, and presumably slavering.

The thing that didn't change was tomatoes. With tomatoes, we made up our minds a long time ago.