Becky asks: When did women start growing out and painting fingernails? 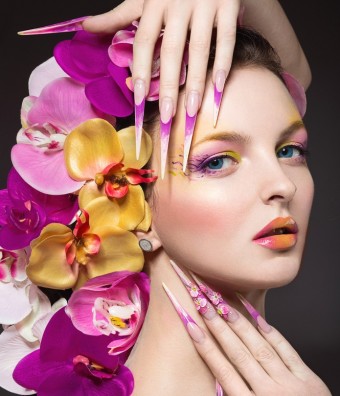 On humans and other primates, nails are a flattened version of a claw which likely developed to aid in gripping and climbing. However, they can also act as a visible "health report." Someone in poor health, or infected by a fungus, might have yellow, brittle nails, while someone in good health might have strong, long nails.

The fact that healthy nails are the sign of a healthy person may have led to people beginning to grow them out, or it could have been simply that long nails are cumbersome when working with your hands, so they were something of a status symbol. Whatever the case, it might surprise you to learn that manicuring nails has actually been around for many thousands of years—dating back at least to 3200 B.C. At the time, Chinese royalty would grow their nails and tint them with things like eggwhites or flower petals. Around the same time, Ancient Egyptians were also painting their nails, this time in accordance with their social classes; richer Egyptians painted their nails a darker colour, while poorer Egyptians painted them a lighter colour.

The modern practice of growing out and painting nails is a result of a more recent occurrence, happening in the 1920s and 1930s where women began growing long, luxurious nails. Before this, women commonly tinted their nails with oil or glosses. However, in the 1920s, shortly after the introduction and popularity of automobile paint, proper nail paint also became available and a nail painting boom resulted.

Of course, many "proper" women didn't dare paint their nails for several decades after that, but Hollywood stepped in. In 1940, it became the style to have long, red nails, likely spurred on by actress Rita Hayworth. Many women started copying her style, striving to look like the knockout celebrity.

Much like painting one's nails, artificial nails, which mimic real nails and add length and a healthy appearance to nails, have an astoundingly long history. Artificial nails were once worn by Chinese women during the Ming Dynasty (14th -17th century). In this case, these nail extensions were worn by noblewomen to further show that they did not have to use their hands for manual labour, unlike commoners. There are also records of women in 19th century Greece using pistachio shells as artificial nails.

It wasn't until 1954 that an early version of the modern artificial nail was invented. It was first patented by Fred Slack, a dentist, who had chipped his nail at work and needed a replacement. He and his brother worked with various materials before coming up with something that would work, starting with dental acrylic, resulting in a realistic-looking fake nail that soon became incredibly popular among women across the world. Since then Slack's company, Nail Systems International, has continued to innovate creating fake nails out of a variety of substances.

Of course, as with everything beauty and style related, growing nails out and painting them are trends that come and go. During the 1960s, women preferred a more natural look and rarely painted their nails. Nail painting saw a huge come-back in the 1980s, though, and since then the practice has been relatively popular in certain countries in the world.