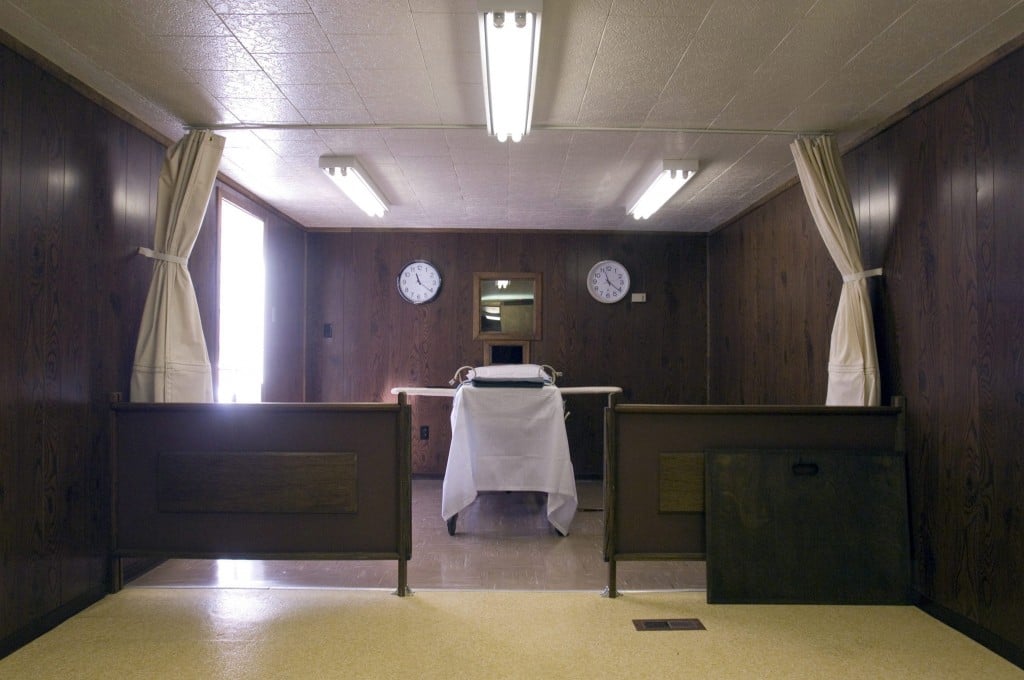 DEER LODGE, Mont. – Inside a rusted beige trailer with a broken outside window that serves as the execution chamber at Montana State Prison, the clock on the wall always reads 12:01.

Three prisoners have been put to death there since Montana adopted lethal injection in 1995 and two prisoners, including Canada's Ronald Smith, still remain on death row.

There is a stay on executions in Montana stemming from an American Civil Liberties Union challenge on behalf of Smith and the other prisoner. It could be years — or never — before another execution takes place.

Warden Leroy Kirkegard is hopeful he won't have to oversee any executions before he leaves the job.

"You have to understand I would fulfil the mission. I would fulfil my responsibilities if called upon, but it is kind of a sense of relief that I'm not going to have to do that," said Kirkegard, 57, as he took The Canadian Press on a tour of the death chamber.

Short corrugated steps make it possible for someone with leg shackles to climb up.

Inside the wood-panelled room there's a medical table, a two-way mirror and a square hole in the wall leading to another hidden room.

"Behind that one-way glass there is where the executioner would actually be at. All the drugs come through there," Kirkegard said, pointing to the hole.

There's no wall with a window separating the prisoner who is being executed. A sitting area is just a few feet away.

"There's nothing separating the offenders' families from the victims' families. We would just line up chairs here," Kirkegard said.

"This is just an old trailer from the 1960s that they converted for this use. It serves its purpose," he added.

"It just sits empty. You can see from the collection of flies on the floor and we're using it for some storage."

A bank of phones in the back of the trailer remain active in case of a last-minute reprieve from the governor.

Between 1863 and 1943 there were 71 people who died at the end of a rope. The next execution didn't happen for 52 years. The last execution was in 2006 after David Dawson White gave up on all of his appeals.

Smith, who is originally from Red Deer, Alta., remembers when White made his decision.

"Dave and I had become quite good friends so that was a little harder to take," Smith said.

"He just said yeah, I'm done. He was the same age as I was and everything was falling apart on him including his health, and he said I have no interest in being here anymore and he just stopped his appeals."

The entrance to the hidden room is meant to keep the executioner's identity a secret. A table and chair are the only furniture. The fluorescent lights are painted a dark red.

Kirkegard, a U.S. air force veteran who spent 20 years in the corrections system in Las Vegas, said there is an extensive manual dealing with executions that outlines procedures starting about two weeks before, continues into the hours leading up to the execution and after it is over.