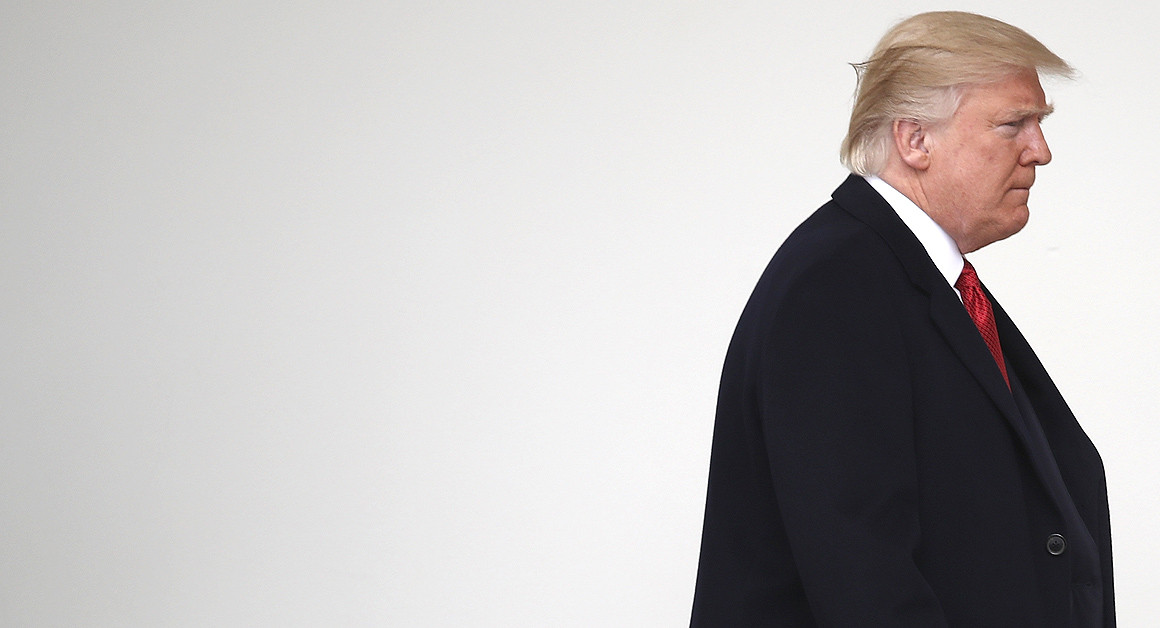 President Donald Trump has far more than three years left in his first term. But inside his pressure cooker of a White House, aides and advisers are sweating the next three weeks.

The symbolic 100-day mark by which modern presidents are judged menaces for an image-obsessed chief executive whose opening sprint has been marred by legislative stumbles, legal setbacks, senior staff kneecapping one another, the resignation of his national security adviser and near-daily headlines and headaches about links to Russia.

The date, April 29, hangs over the West Wing like the sword of Damocles as the unofficial deadline to find its footing — or else.

But however real Trump's frustrations are with the three rival power centers he has installed — chief of staff Reince Priebus, son-in-law Jared Kushner and chief strategist Steve Bannon — top officials inside and around the White House don't expect Trump to make any drastic changes until after 100 days, lest staff-turmoil stories swamp a key stretch of media coverage.

That reprieve — unless Trump simply decides he's had enough — has both bought his staff a little time and put it on edge.

"One hundred days is the marker, and we've got essentially 2 1/2 weeks to turn everything around," said one White House official. "This is going to be a monumental task."

For a president who often begins and ends his days imbibing cable news, the burden has fallen heavily on a press team that recognizes that how well it sells Trump's early tenure in the media will likely color the president's appetite for an internal shake-up.

That was the backdrop for a tense planning session for the 100-day mark last week.

More than 30 Trump staffers piled into a conference room in the Eisenhower Executive Office Building adjoining the White House on Tuesday, according to a half-dozen attendees who described the meeting.

Mike Dubke, Trump's communications director, and his deputy, Jessica Ditto, kicked off the discussion of how to package Trump's tumultuous first 100 days by pitching the need for a "rebranding" to get Trump back on track.

"I think the president's head would explode if he heard that," one of the White House officials present said.

Staffers, including counselor Kellyanne Conway, were broken into three groups, complete with whiteboards, markers and giant butcher-block-type paper to brainstorm lists of early successes. One group worked in the hallway.

"It made me feel like I was back in fifth grade," complained another White House aide who was there. "That's the best way I could describe it."

Dubke, who did not work on the campaign, told the assembled aides that international affairs would present a messaging challenge because the president lacks a coherent foreign policy. Three days later, Trump would order missile strikes in Syria in a reversal after years of opposition to such intervention.

"There is no Trump doctrine," Dubke declared.

Some in the room were stunned by the remark.

"It rubbed people the wrong way because on the campaign we were pretty clear about what he wanted to do," said a third White House official in the room, "He was elected on a vision of America First. America First is the Trump doctrine."

Dubke told POLITICO he was disappointed White House staff would complain in the press rather than in real time.

"It was a brainstorming session, and I really wish they had spoken up in the room so that we could have had an open and honest conversation," he said. "It is unproductive adjudicating internal discussions through the media."

As for the rebranding remark, Dubke said that had been misinterpreted. "There is not a need for a rebranding, but there is a need to brand the first 100 days," Dubke said. "Because if we don't do it, the media is going to do it. That's what our job is."

Trump's communications team is now plotting to divide the first 100 days into three categories of accomplishments, according to people familiar with plans: "prosperity" (such as new manufacturing jobs, reduced regulations and pulling out of the Trans-Pacific Partnership trade deal), "accountability" (following through on swamp-draining campaign promises such as lobbying restrictions) and "safety/security" (including the dramatic reduction in border crossings and the strike in Syria).

Amid near-constant talk of staff shuffling, Dubke's name has fallen below the radar, in part because he cuts such a low profile. He was a late addition to Trump's team after the initial pick for the job, Jason Miller, bowed out for personal reasons. A behind-the-scenes operator, Dubke has yet to appear on television, Trump's favorite medium.

But as most of Trump's senior team — Cabinet members, military and economic advisers, Bannon, Priebus, Kushner and White House press secretary Sean Spicer — went to Mar-a-Lago last week for the bilateral meeting with China amid the unfolding Syrian situation, Dubke was conspicuously absent and back in D.C.

"That would tell you exactly how he is perceived," said one of the White House officials.

However, another White House official defended Dubke's internal role, saying that before his arrival people in the press operation were "doing whatever they wanted to do without a broader set of goals being defined." Dubke imposed structure, "and that's going to ruffle some feathers."

Still, the more sympathetic aide to Dubke admitted, "He has not yet integrated into the senior leadership."

The constant presence of senior advisers encircling Trump has created a vicious — and, some officials say, self-defeating — cycle in which top aides feel they cannot leave his side, lest they lose influence or be perceived to have.

Trump hired Dubke in mid-February after a frustrating first month of bad press, telling Fox News later that month "in terms of messaging, I would give myself a C or a C+." But even after Dubke's arrival, Trump and his senior team have continued to seek outside advice.

During the failed push to pass health care legislation, Miller drafted a short messaging memo with four bullet points that was given to top White House officials, including Kushner and Bannon, according to four people familiar with the matter.

Miller, who now works for Teneo, the consulting firm created by former aides to Bill and Hillary Clinton, has been spotted around the White House twice in recent weeks, though he has made clear to friends in the administration that he has no interest in joining the White House.

The constant palace intrigue and internal jockeying has left the White House in a state of paralysis.

Trump parted with deputy chief of staff Katie Walsh in late March; his aides are discussing a reorganization; and Trump himself has begun floating names to replace Priebus for feedback, according to a person close to the White House. On Friday, Trump ordered his two other senior-most advisers, Kushner and Bannon, to settle their differences in a Mar-a-Lago sit-down after a week of their increasing shadowboxing through anonymous accusations in the press.

One White House official last week questioned why Bannon was taking on a member of Trump's family so openly.

"For a Svengali, that doesn't seem like a smart thing to do," the official said. "I don't think that ends well for him."

A White House ally of Bannon noted that despite bumping up against Trump's son-in-law, he had held sway over the most crucial policy rollouts, such as Trump's hard line on immigration and trade. "Anyone who thinks that Steve has lost his influence, they don't know what the f— they're talking about," this person said.

The strikes on Syria, a successful summit with President Xi Jinping of China and Friday's sit-down between Bannon and Kushner appear to have calmed some frayed nerves. Two people who have spoken with the president in recent days said Trump's mood has improved.

Still, the question of how to frame the first 100 days remains a challenge.

Trump aides are grappling with the reality that they will end this opening period with no significant legislative achievements other than rolling back Obama-era regulations. Even the White House's most far-reaching success, the confirmation of Justice Neil Gorsuch to the Supreme Court, required the Senate rewriting its own rules to overcome Democratic opposition.

Though the White House continues to push for progress on stalled health care legislation, there are only five legislative days remaining once Congress returns from a two-week spring break. Plus, another deadline looms: Trump and the Republican-controlled Congress must still pass a bill before April 28 to keep the government running.

If they fail, a shutdown would begin on Trump's 100th day in office.