Bigger private entities took notice of the Jaycees' success and began launching big-budget commercialized haunted houses. At the same time, Hollywood movies—which for years relied on physical effects, animatronics (think Jaws), and live actors—were moving to CGI, SFX, and animation. Many people who once worked in movies building those props and creating those effects saw these live haunted houses as a new way to ply their trade. 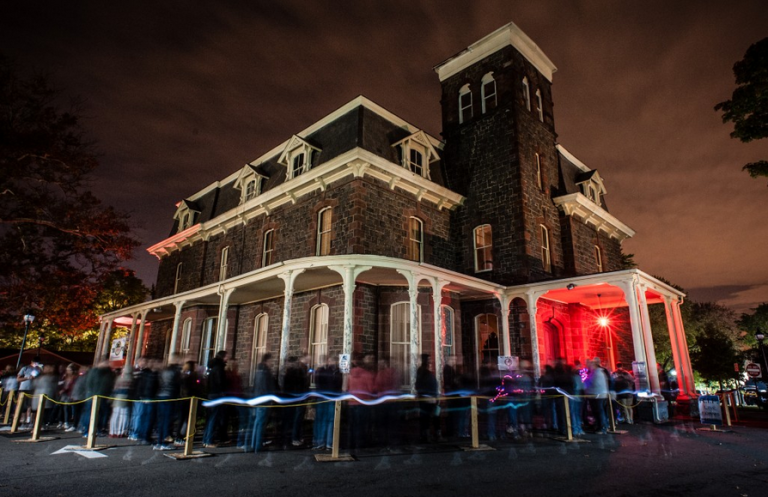 By 1990, the haunted house industry was being transformed by bigger money, safety regulations (in large part due to a fatal fire in a haunted attraction at a New Jersey Six Flags), technological advancements, and consolidation of talent. Ben Armstrong opened Netherworld in 1997. He's also, along with Larry Kirchner and six other haunted attraction owners, a co-founder of America Haunts, a group of top haunted attractions across the country that collaborates to advance the haunted house industry. In the two decades since he opened his attraction, Armstrong has seen the explosion of the industry from "just decorated scenes and actors" to LED lighting, animatronics, high-quality audio, big special effects, theatrical acting, animation and projections. Today, Netherworld is open every night in October, has more than 300 animatronics, a budget of nearly seven figures, and employs two full-time steel fabricators to construct many of the physical effects, including a new giant octopus/starfish creature with 21 different motions. Says Armstrong, "It is about 12, 13 feet across and it comes overhead with its tentacles wiggling like it is going to eat you."

The haunted industry is an arms race now, with bigger budgets ramping up higher expectations. But for Kirchner, the haunted house industry is still very much a DIY affair. While his haunted attraction "The Darkness" is routinely rated as one of the top in the country and has the budget to match, Kirchner still knows he still has to do it all.

Back in Virginia, Matt Smith explains over the screams of terrified teens that Shocktober begins its build in March immediately after returning with new and fresh ideas from TransWorld (the industry trade show). He may not have the funding of The Darkness or The Bates Motel in Philadelphia, but Smith finds ways to create more haunt for less buck. For example, there are moving floorboards in the house that are rigged up using ball bearings, something Smith saw being done at the trade show with a much higher price tag. "They had ones (made of) steel, but this one is made out of wood," says Smith. "It still works."

Sometimes horror doesn't take a million dollars. Moments later, a teen boy-girl couple walks by with the boy gloating that the mansion didn't scare him. All of sudden, seemingly out of nowhere, an actor in bloody make-up jumps out and startles the two. They both scream. Case in point.