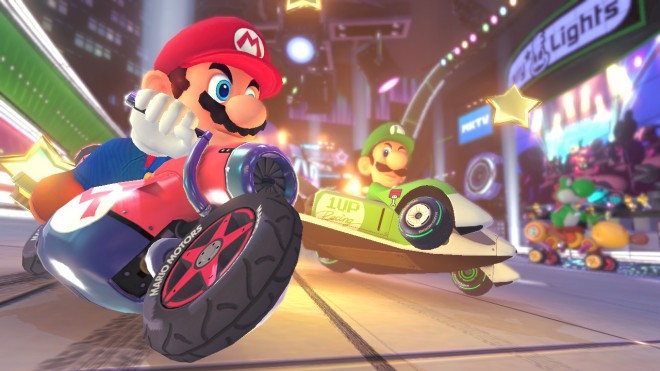 Long version: Nintendo is pinning all its near-term hopes and dreams for its beleaguered Wii U console to the May 30 release of Mario Kart 8, the latest entry in its perennially popular series of go-kart racers featuring the characters from the Super Mario series. This is the first version of the game to be rendered in resolutions higher than 480p. Its soundtrack is performed in part by a live jazz band. The sights and sounds are glorious, and the core driving gameplay is still perfect. This is not Mario Kart 8′s problem.

I've made this point before, back when Nintendo released its iteration of Mario Kart for the original Wii in 2008, but the best feature of previous Mario Kart games was not actually racing around a track, but Battle Mode. In this gameplay mode, which has been present ever since the series debuted on the Super Nintendo, you drive around in an open arena, attempting to out-maneuver other players and kill them off by firing weapons at them. We would spend hours and hours and hours playing this mode only. It's madcap fun, if done right.

Mario Kart Wii did it very wrong. Mario Kart 8 on Wii U fixes those problems, then adds new, worse ones. For some reason I absolutely cannot fathom, Battle Mode matches now take place on the same lengthy, looping race tracks as the actual races themselves do. This made no sense in theory, but my wife (another lifelong Battle Mode fan) and I gamely jumped in to see if it actually worked out in practice. We literally spent the entirety of the first match driving aimlessly around the track attempting to find each other. We could not. Time ran out.

We tried one more match, noticing that the customization options didn't even allow us to turn off the time limit and turn the match into a last-man-standing affair. This time we just drove circles around each other near the start line, glumly firing green shells. Turned it off right after, never to be touched again.

What a mess! Who decides these things? More to the point, why? Why does there seem to be a team of people at Nintendo tasked with coming up with ever more elaborate ways to ruin Mario Kart? The answer, as near as I can tell, is that previous iterations of Battle Mode were simply too much fun.

Or rather, that the fun was not fairly distributed. Here's what I wrote about Nintendo's portable 3DS iteration of Mario Kart in 2011:

"The Mario Kart series may appear at first blush to be racing games, but in fact they are a carefully crafted videogame version of Harrison Bergeron. You can't simply outrace the pack of Mario characters through the 32 different cartoon courses. You have to use items to attack them and defend yourself. The Handicapper General distributes the items, giving lead racers the crappy items (a tiny banana peel that you can drop on the track in hopes that someone will at some point be dumb enough to drive over it) and the racers in the back get shitkicker death cannons."

Is this true of Mario Kart 8? Now more than ever! 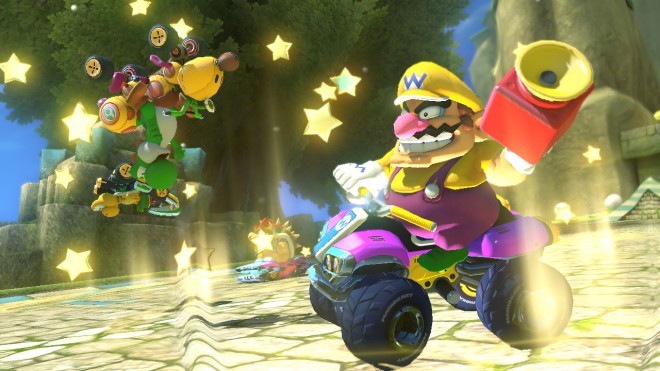 The Horn is a lie. Image: Nintendo

It is widely known that the worst, stupidest item in the Mario Kart series is the Blue Shell. When you launch it, it flies above the course, homing in on the racer in first place, then lands directly on top of them, causing them to explode and be slowed down considerably. This is no help to the person who threw the shell since they are still in last place. This is a great help to the person in second place, as it allows them to get into first.

Nintendo said in the runup to Mario Kart 8's released that it had finally introduced an item that allows players to avoid the Blue Shell. The "Super Horn" blows all items out of the vicinity of the player using it. I did get a Super Horn at one point and tried it, and it does indeed blow away an incoming Blue Shell. Only thing is, during the entire course of my playing all of this game's 32 tracks and some multiplayer matches, I got a Super Horn twice. I got hit by a Blue Shell every damn time.

And actually it's even worse. Because, perhaps to cancel out even the modest percentage benefit accrued by the mere possibility of a Super Horn ever showing up, Nintendo has given players at the front of the pack even more disadvantages. First, they've managed to come up with an item that's even worse than a banana. If you're in first, it seems most likely that you will get a Coin out of the box, which gives you a bit of a speed increase as you collect them. But these are scattered in groups of threes and fours all over the course anyway, so one more is a marginal benefit at best.

Worse than that, you can no longer "trail" an item and pick up another one. Sorry to Mario Kart newbies if this sounds super nitpicky, but: You used to be able to drag your item behind you as a shield against incoming projectiles, while leaving your inventory open to pick up another one. But now, dragging the item doesn't remove it from your inventory. So you can't even cycle through item boxes trying to find a Super Horn unless you're willing to give up the one and only line of defense standing between you and a turtle shell going up your tailpipe.

After playing through all the tracks myself, we had a little Mario Kart night over the weekend.

"Blue Shell is the best!" said a game designer friend of ours, after coming in somewhere around last place.

"What?" my wife exclaimed. "It's the worst! If you're in last place it doesn't even actually do anything to help you get ahead!"

"I know," he said. "But, I know I'm going to lose. The Blue Shell lets me fuck with the people who are good at the game."

And there finally is the honest, uncomfortable truth about the Blue Shell, and also why Battle Mode had to be razed to the ground: Battle Mode had to be a confusing, sprawling chaotic mess so that everyone involved would have only the same amount of fun, no more, no less. Better, thinks Nintendo, that players simply never encounter each other, rather than suffer the embarrassment of having their differences in skill be unmasked and laid bare.