Brandon asks: Why can't you use blood from someone who has a different blood type than you? 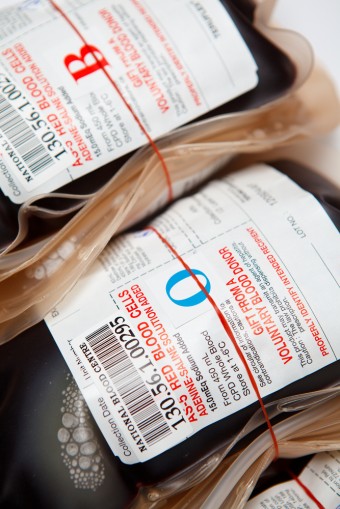 Hot, cold or just plain bad, throughout history, people have used blood as a metaphor to describe their changing moods. One aspect of blood, however, is immutable – its type. Since each blood type carries unique characteristics that can wreak havoc in the wrong body, it is vitally important to know yours and its attributes.

Why Are There Different Blood Types?

Scientists believe the different types manifested as a result of early humans adapting to infectious diseases: "For example, malaria appears to be the main selective force behind type O . . . . [which] is more prevalent in Africa and other parts of the world that have high burdens of malaria, suggesting that blood type carries some sort of evolutionary advantage. . . . In this particular case . . . cells infected with malaria don't stick well to type-O or type-B blood cells . . . . As a result, people with type O get less sick when they're infected with malaria . . . ."

How Are Blood Types Classified?

Today, the types are classified according to: "The presence or absence of two antigens – A and B – on the surface of red blood cells."

In addition, blood is also described as either positive or negative, depending on the presence or absence of the Rh factor.

The attackers are found in blood: "Plasma [which] contains Anti-A and Anti-B antibodies depending upon blood group. . . . Antibodies are important molecules our immune system makes to help protect ourselves against foreign things such as bacteria and viruses [and] . . . can also be formed in response to different blood groups."

Women who've been pregnant may remember the Rh blood test, which screens to detect any incompatibility: "If [mother] is Rh-negative and . . . baby is Rh-positive, [mother's] body will react to the baby's blood as a foreign substance. [Mother's] body will create antibodies (proteins) against the baby's Rh-positive blood . . . . Rh incompatibility is more likely to cause problems in second or later pregnancies [when] Rh antibodies can cross the placenta and attack the baby's red blood cells . . . lead[ing] to hemolytic anemia in the baby."

Luckily, if an incompatibility is found early on, there is a prenatal treatment (Rh immune globulin) that will prevent any problems before they start.

What Are the Different Types?

The second most common blood type across all major ethnic/racial groups in the U.S., type A blood is characterized by the presence of the A antigen on its red blood cells, and the B antibody in its plasma.

In the U.S., about 40% of Caucasians, 31% of Hispanics, 27.5% of Asians and 26% of African Americans carry this blood type, which is safe to donate blood to others with type A blood, as well as those who are type AB. In addition, people with type A may also receive transfusions of type O blood.

This type is relatively rare (second only to AB). It contains the B antigen on its red blood cells, and the A antibody (to attack A antigens) in its plasma. Although only 10% and 11% of Hispanics and Caucasians in the U.S. have this blood type, respectively, it is much more common among Asians (25.4%) and African-Americans (19%).

Uncommon, only 7.1% of Asians, 4.3% of African-Americans, 4% of Caucasians and 2.2% of Hispanics in the U.S. have the AB blood type. It is characterized by having both A and B antigens on its red blood cells, and neither antibody in its plasma (meaning there is nothing that will attack foreign blood).

For this reason, those with AB blood type are sometimes referred to as universal recipients because they can accept blood from anyone; however, because of the presence of both antigens on type AB red blood cells, people with AB blood can only donate it to others with the same type.

Type O blood is the most prevalent in the United States.  Type O has neither A nor B antigens on its red blood cells, but both A and B antibodies in its plasma. As a result, those with type O blood can only receive this type in transfusions since its plasma antibodies would attack anything else; however, those with type O can also donate blood to anyone else since type O is free from all immune-system antagonizing antigens – earning type O'ers the moniker "universal donors."

What Happens if You're Given the Wrong Blood?

Very bad things, including an:

Acute hemolytic transfusion reaction[ which can] occur within 24 hours of the transfusion and often occur during [it]. Ominously, the patient may report a "feeling of impending doom". They may also complain of a burning sensation at the site of the infusion, together with chills, fever, and pain in the back and flanks . . . . The most sever reactions involve intravascular hemolysis; the donor RBCs [red blood cells] are destroyed by the recipient's antibodies while they are still inside blood vessels . . . . Hemoglobin is released . . . and excreted in the urine . . . turning [it] dark brown. . . . Bilirubin . . . usually secreted into bile by the liver, instead accumulates in the blood causing jaundice. Massive activation of complement can cause shock, as can the large amounts of tissue factor released by RBC [red blood cell] debris that triggers uncontrollable clotting cascade (disseminated intravascular coagulation).