Kyle asks: Why do we get old? 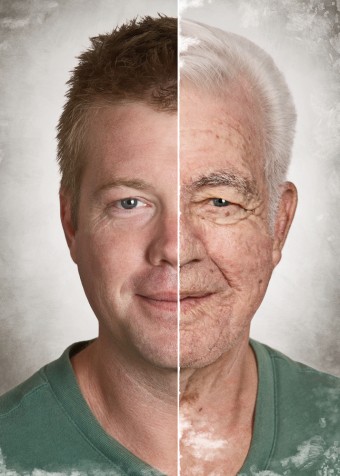 Gray hair, memory loss, wrinkles and brittle bones, sooner or later, each of us gets old (if we're lucky). Yet scientists tell us that there is no evolutionary reason for us to age. So, why do we?

Researchers do not agree as to the causes of aging. Some claim our genes are programmed to deteriorate, wither and die, while others believe accumulated damage is the root of our senescence. Muddying the waters further, many believe that a combination of several factors contributes to aging.

Around since 1882 when biologist August Weismann first introduced it, at its fundamental level, the cell damage theory holds that the body succumbs to "wear and tear": "Like components of an aging car, parts of the body eventually wear out from repeated use, killing them and then the body."

Building on this fundamental idea, a number of researchers today are exploring particular physiological aspects to reveal where and how this "wear and tear" occurs.

Focusing on the deterioration of DNA over a lifetime, according to this theory:

DNA damages occur continuously in cells . . . . While most of these damages are repaired, some accumulate . . . . [and] genetic mutations occur and accumulate with increasing age, causing cells to deteriorate and malfunction. In particular, damage to mitochondrial DNA might lead to . . . dysfunction. . . [where] aging results from damage to the genetic integrity of the body's cells.

Mitochondrial DNA (mtDNA) mutate faster than DNA in a cell nucleus, so mtDNA create more damaging "free radicals" that are believed to induce aging. Given that mitochondria (the power plants of cells) work harder the more fuel (a.k.a. "food") is available, the less an organism eats, the fewer free radicals are produced. As a result, some scientists have opined that calorie restriction (CR) can act as a fountain of youth: "A diet severely restricted in calories (about 30 percent below normal, but above starvation levels) can increase lifespan, lower rates of cancer, and slow declines in memory and movement."

Others are more cautious when it comes to recommending a CR diet: "Restricted-diet animals grow more slowly, reproduce less, and have dampened immune systems . . . [because the] dietary restriction seems to switch the body into a survival mode in which growth and energy consumption are suppressed."

In addition, detractors note that just because: "Lifespan extensions [were] seen in mice [this] may not be observed in large mammals like humans . . . [because unlike small animals] large mammals can migrate in times of famine . . . ."

Nonetheless, at least one study has shown that people on a CR diet will "lower blood cholesterol and insulin and . . . reduce[ the] risk of atherosclerosis," all conditions that contribute to aging and mortality.

Another branch of the cell damage theory focuses on "cross-linking," a process whereby damaged and obsolete proteins, which would otherwise be broken down by enzymes (proteases), are protected from that action by making inappropriate attachments, allowing them to "stick around and . . . cause problems." Over time: "An accumulation of cross-linked proteins damages cells and tissues, slowing down bodily processes . . . ."

This phenomenon has been identified in at least one sign of aging, and implicated in another:

Cross-linking of the skin protein collagen, for example, has proven at least partly responsible for wrinkling and other age-related dermal changes [and] . . . in the lens of the eye is also believed to play a role in age-related cataract formation. Researchers speculate that cross-linking of proteins in the walls of arteries or the filter systems of the kidney account for at least some of . . . atherosclerosis . . . .

Looking at the blueprints that drive organisms, each of these theories explores the idea that, at the cellular level, we are "programmed" for obsolescence.

Many researchers believe that: "Aging is the result of a sequential switching on and off of certain genes, with senescence [old age] being defined as the time when age-associated deficits are manifested . . . ."

To support this theory, scientists have studied aging with the help of Caenorhabditis elegans: "The classic laboratory nematode . . . [which are] tiny, transparent worms . . . [that are] easy to manipulate genetically, and with a life span of just two weeks . . . provide a quick time-lapse view of the aging process . . . ."

In 1993, one group of researchers discovered that: "C. elegans with a specific single-gene mutation lived twice as long as members of the species that lacked [it. This] . . . led to a shift in thinking . . . that [as opposed to many genes] a single gene could dramatically regulate how long an organism lived . . . ."

This gene, daf-2, is a protein remarkably similar to our receptor protein insulin, and, at least in C. elegans, was shown in later research to be a very bossy gene: "Daf-2 normally controls many other genes . . . . For example, in their studies of C. Elegans, researchers have found a large set of genes that are either "turned on" or "turned off" in worms that carry two copies of the daf-2 mutation . . . ."

The types of genes that are regulated by daf-2 include stress resistance, development and metabolism. This is significant because these: "Various genes encode for proteins that extend life by acting as antioxidants, regulating metabolism and exerting an antibacterial effect . . . ."

Other researchers ascribe to the theory that age-regulating genes carry: "Biological clocks [that] act through hormones to control the pace of aging [through] . . . the evolutionarily conserved insulin/IGF-1 signaling (IIS) pathway . . . ."

This signaling pathway is significant: "The IIS system is an ancient system that is highly conserved and coordinates growth, differentiation and metabolism in response to changing environmental conditions and nutrient availability . . ."

Thus, under this theory, individuals adapt at a cellular level, in response to environmental conditions, to foster the best outcome for continuation of the species: "In response to harsh environmental conditions . . . [cells adapt to produce] enhancement of cellular stress resistance and protection, suppression of low-grade inflammation and enhanced mitochondrial biogenesis [increased energy in the cell]."

Thus, in tough times the organism's life is extended, at least long enough for it to fulfill its biological imperative to breed.

The third gene-coding proposal to explain aging provides that: "The immune system is programmed to decline over time, which leads to an increased vulnerability to infectious disease and thus aging and death."

Proponents of this theory note that: "As one grows older, antibodies lose their effectiveness, and fewer new diseases can be combated effectively by the body, which causes cellular stress and eventual death."

This last argument has been called into question by recent research that studied mortality and fertility across 46 different species (including humans), which produced remarkable results: "Although . . . most of the 46 species can be roughly classified along a continuum of senescence . . . [displaying] strong deterioration with age [other species demonstrated] negative deterioration, to negative senescence and improvement with age."

This means that unlike people, some species: "Are the opposite of humans, becoming more likely to reproduce and less likely to die with each passing year."

In fact, there is so much diversity of aging across species that, even among those that age like us, there are some, such as the alpine swift, that become more fertile (likely to reproduce) as they approach their demise.