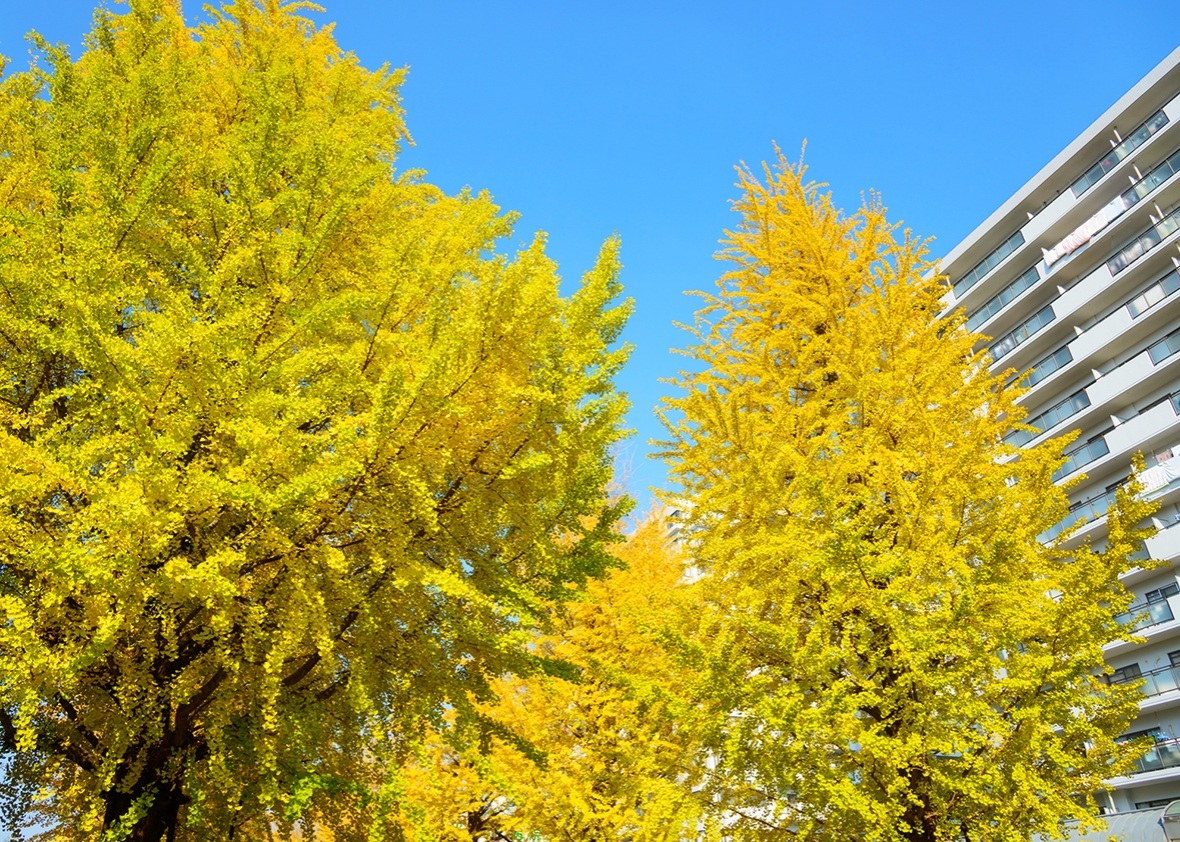 This story was adapted from an episode of New Hampshire Public Radio's podcast Outside/In. Listen to it here:

Each autumn, foliage-starved urbanites are treated to a spectacle of color as the fan-shaped leaves of the ginkgo trees lining their streets turn a brilliant shade of gold. But the treat comes at a cost: When the female ginkgo trees shed their leaves and berries, they rot and emit a stench often likened to dirty gym socks, vomit, or poop.

Can you smell it? It's that time again for the ginkgo trees to start blooming and for downtown to smell like boiled egg farts. 🌳💨

The ginkgo tree has owned this bad smell for millennia. Like the horseshoe crab, elephant shark, and cockroach, the ginkgo is a living fossil, meaning it has existed virtually unchanged for over 200 million years. Botanists theorize that the rancid smell of the ginkgo berries came to be because it actually attracted dinosaurs to consume (and later discharge) the berries, helping to spread the seeds. Today, that famous ginkgo stink is an annual reminder that fall has officially arrived.

So if ginkgo trees are such a colossal pain in the nostrils, why are urban foresters still planting them?

The answer to this question lies in why we started planting the trees in the first place. In the early 19th century in London, coal pollution was so thick you could see it. Respiratory illness spiked, decreased visibility was causing more traffic accidents, and the smog wreaked havoc on city trees. But the ornamental ginkgo trees (brought over from Asia and planted in London's botanical gardens) continued to thrive. Thus, the ginkgo gained a reputation in industrial Europe for being a hardy tree that could withstand the stresses of city life.

And city life is stressful: According to the U.S. Forest Service, the average life expectancy of trees planted in a city's downtown is 10 years. That's much shorter than the average lifespan of nonurban trees, which can range anywhere from 50-400 years, depending on the species. A ginkgo, on the other hand, can live hundreds of years in a city. Not only can it hold its own against air pollution, but it stands strong in the face of soil compaction, pests, disease, salt, wind, cold, drought, fire, and even nuclear blasts.

"I know of many instances here in the city where people are dumping their cleaning agents into tree beds and the ginkgo fights through it," says Navé Strauss, director of street tree planting for New York City Department of Parks and Recreation. According to its last tree census, published in 2007, the ginkgo ranked in the top 10 for most common street trees in New York City. They're not only great at resisting disease, but their branch structure, which tends to include a single dominant trunk, makes them very easy to prune, says Strauss. This means planting a ginkgo also results in lower maintenance costs over the years.

When the female ginkgo trees shed their leaves and berries, they rot and emit a stench often likened to dirty gym socks, vomit, or poop.

Trees do great things for cities—they beautify neighborhoods, reduce traffic speeds, increase walkability, reduce crime, and increase spending and property values. But despite ginkgoes' low-cost and low-maintenance lifestyle, grumbling over its stink continues. Cities have tried a number of strategies to curb the smell over the years, some more successful than others. For years, residents in Washington, D.C., took it upon themselves to shake the offending berries from the trees before they ripened, an effective tactic, provided people actually did it. In the 1980s, the District Department of Transportation came up with a more efficient method—Sprout Nip, an herbicide that, when applied to female ginkgoes in the spring, halts fruit development. This method doesn't rely on unpaid citizens doing their part, but it isn't foolproof. An ill-timed rainstorm can wash off the herbicide, and it costs the city approximately $80,000 annually. D.C. residents can also petition to have a female ginkgo tree removed from a block, but at least 60 percent of the block must agree with the removal.

In Seoul, South Korea approximately 114,000 ginkgoes dot the city streets and parks, so each year, the city deploys an army of more than 440 workers to hand-pick the berries before they fall to the ground at a cost of 14 million won (approximately $13,000 USD). That's significantly less than the alternative plan on the table, relocating the female ginkgo trees to the suburbs, which is estimated to cost upwards of 25 billion won ($22 million USD). In some smaller towns, like Iowa City, Iowa, and Easton, Pennsylvania, they've simply chopped down most of their female ginkgoes or banned them from being planted altogether.

Which raises the question: Rather than chop down females, why not only plant males in the first place? That's what a lot of cities tried to do in the 1980s and 1990s, only to find themselves holding their noses decades later. This may go deeper than mix-ups in how the trees were identified in the nursery: It turns out the ginkgo, like some species of fish, can spontaneously change sex. This evolutionary adaptation allows ginkgoes to propagate when the sex ratio is imbalanced. This means even planting a male ginkgo does not guarantee that it won't start to stink 30 years down the line.

Some municipalities are choosing to just deal with the stench. "A lot of cities are saying 'Hey, ginkgoes are cheap, they're low maintenance, we have a limited budget for street tree planting. Let's plant 10,000 ginkgoes,' " says Tom Kimmerer, chief scientist at Venerable Trees Inc.

Of course, biodiversity is also important and this method doesn't cut it: "In terms of ginkgoes, you might as well plant a plastic tree," he argues.

The species isn't native to Western cities, which make it a poor host for local species. While an urban oak may host over 500 species of caterpillars, a ginkgo tree may host only one or two, which means fewer birds which eat those bugs, and so on up the chain.

Through London smog, New York congestion, and Washington's swampy summers, the ginkgo has been the old standby if you're just looking to add greenery to your streets. But perhaps it's time for urban planners to take a leap. Instead of favoring a tree that accompanies the city, maybe urban planners should think about how the city can accommodate trees.

Some cities have already taken this to heart. When then-New York City Mayor Michael Bloomberg announced an initiative to plant 1 million new trees in the city by 2017, he made biodiversity a priority. Prior to 2007, approximately 40 tree species were being planted in New York; It now plants as many as 220.

The trouble is that native trees can't always hack it in the narrow spaces with inadequate soil in between sidewalks and streets that try to jam them into. "Whenever possible we try to plant native trees" explains Navé Strauss of the New York City Parks Department, "But of course, native trees aren't always going to be the perfect tree for every place within the five boroughs."

Technological solutions for cramming native trees into these tight spaces exist, like the Silva Cell, a planting system that combats soil compaction, but they can run upward of $14,000 apiece. Planting a ginkgo is closer to $1,650, which means that often, even despite its inhospitable nature and bad smell, it's still going to come out on top.

Sometimes, it's better to have a stink, sex-changing ginkgo tree than no tree at all.