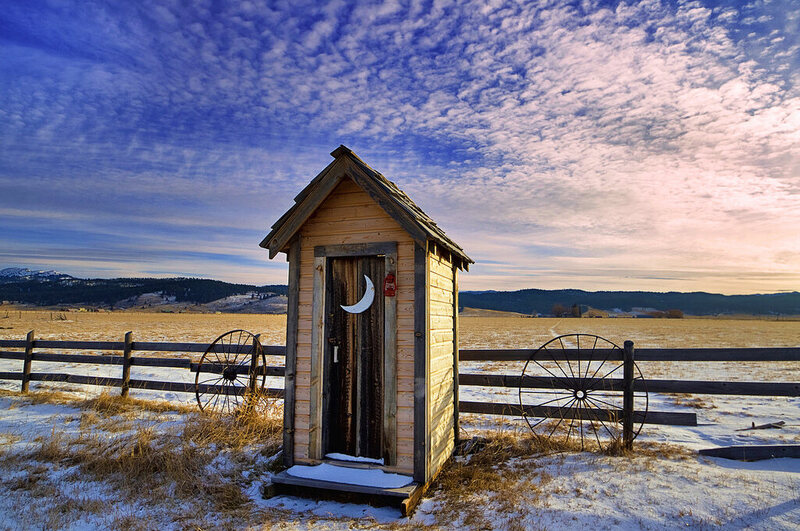 That's not as historic as it looks. Charles Knowles/CC BY 2.0

The rickety old Wild West outhouse with a crescent moon cut out of the door is one of the most enduring symbols of the era. It's one of those images that you remember, but can't place exactly where you first saw it. Which isn't surprising, since it probably never existed.

From cartoons to films to modern-day replicas of historic toilets, the cut-out shape of a crescent moon in an outhouse door seems like something that is so ingrained in our cultural consciousness, that it must have existed in real life. But it doesn't seem to have been much of a historic reality. "I have never—with my own eyes—seen a crescent moon shape in an actual outhouse I could confidently date to earlier than about 1960," says Dr. Adam Davis of the Missouri Folklore Society. While there's not a great deal of scholarship on the origins of the crescent moon outhouse, Davis wrote a piece on the subject in 2007. "I have seen more photographs of outhouses where I suspect the decorations to be authentically pre-mass-media that have half-moon cutouts (that is, semicircles) although, interestingly, those are never the icons one sees in cartoons. Similarly, I have seen photos of crescent moons which are entirely horns-up, as if ready to catch water, but that's not the icon either," he says.

Having a hole cut out of outhouse doors was definitely a real thing, providing ventilation and light into the stall, but no one is sure exactly where the idea that they were commonly crescent-shaped came from. 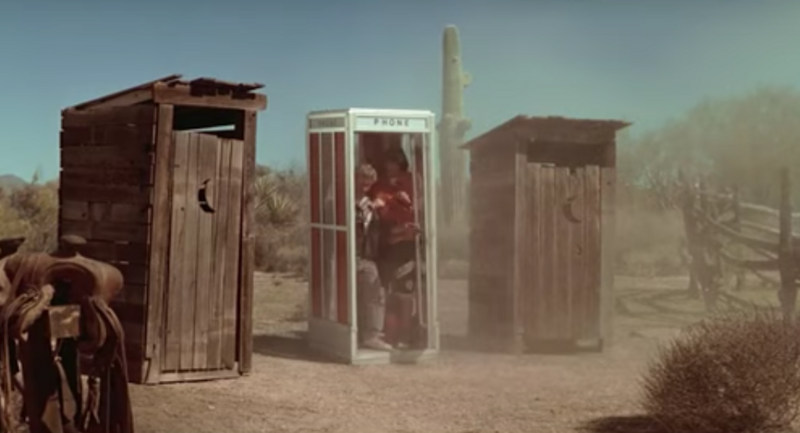 The most commonly held theory, and the one you are most likely to find via a cursory Google search, posits that it was once the sign for a woman's toilet. As the story goes, in the 1800s and earlier, literacy wasn't widespread, so the common symbol used to differentiate between a men's privy and a women's was that the men's door carried a sun or star symbol, while the women's stalls were marked with a moon. According to the book Outhouses by Holly Bollinger, this cosmic dichotomy was devised based on ancient imagery. "With the crescent moon signifying Luna or Goddess Diana it became known as a feminine symbol, therefore welcoming womenfolk," Bollinger writes. This might seem like a lofty reading of bathroom symbolism, but the moon has long been associated with a female aspect, and it's not unreasonable to think that this would have been general knowledge.

So how did the women's room symbol come to represent all outhouses? Bollinger's book goes on to suggest that men's outhouses were not as well kept up, so eventually, to conserve resources and labor, male stalls were taken down, and the remaining moon-doored stalls became a symbol of unisex bathrooms, and outhouses in general. One version of this theory, shared in the 1989 book The Vanishing American Outhouse (as quoted by The Straight Dope) says that it was during the mid-1800s that the general public forgot the original meaning behind the moons, and just began seeing them as the symbol for an outhouse.

This version of the moon-door's origin (or something close to it) can be found all over the place, but the problem is that there doesn't seem to be a great deal of hard evidence to back it up. "For folklorists, one of the earmarks of the improbable is, it's highly articulated, and yet without precedent or source. It springs into the world full-grown," says Davis. The provenance of the gendered account doesn't seem to stretch back very far either, with The Straight Dope only tracing it to a 1972 book called The Little Red Schoolhouse: A Sketchbook of Early American Education, which describes male/female outhouses with the sun/moon symbols. 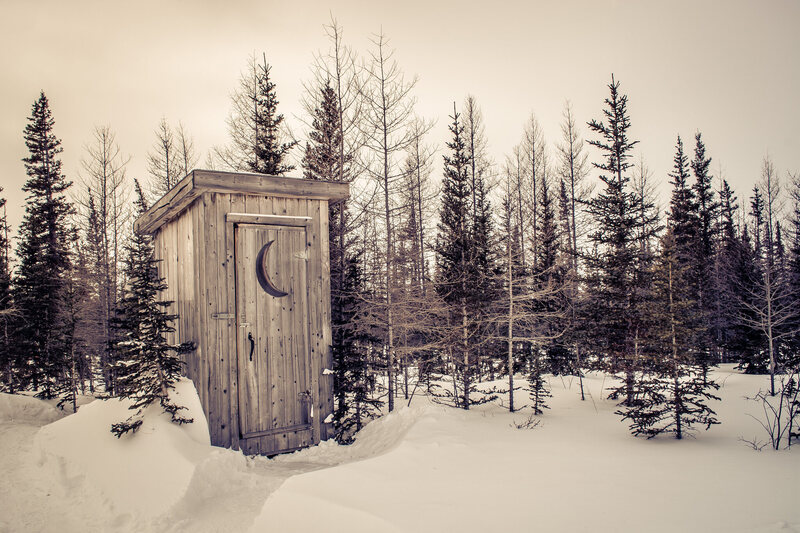 A fine looking place to relieve yourself. Lee Coursey/CC BY 2.0

Davis, in his 2007 examination of the symbol, contends that while there is evidence of moon-shaped cut outs in historic outhouses, they are little more than a decorative motif that "seems to have been media-generated, then provided with a fictive, back-formed pedigree to explain it." Davis also notes that in most cases of pre-1900s hardscrabble living, building two outhouses just for gender considerations was not likely a priority given the resources it would require.

The precise origin of the outhouse moon is probably lost to time, since detailed records on historic bathroom design aren't exactly in great abundance. But whether it was a formerly gendered symbol that developed into an icon or a simple flourish that came to define our thinking, outhouse crescent moons are abundantly used on modern outhouses. Today, you can find them on farms, in recreated historic villages, and in Elk Falls, the self-proclaimed "Outhouse Capital of Kansas."

"Mass media originated the practice of tying yellow ribbons as symbols of a wished-for homecoming, and that is most definitely now an authentic folk behavior," says Davis. "So here's a cool case of a folk practice being picked up and made iconic by mass culture and then sent back down to the folk—I expect most people who are moved to carve ornamental vents in their outhouses nowadays will opt for the crescent." Whether it was ever a commonly used symbol or not, it is certainly the reality now.