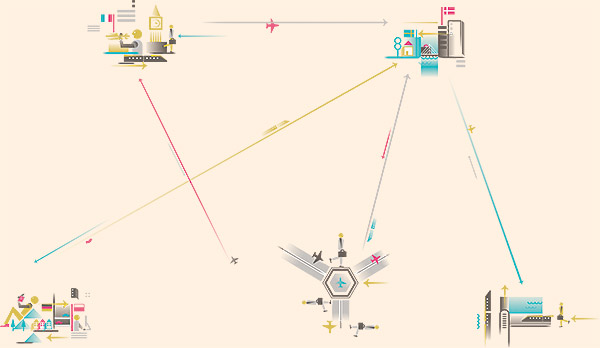 Some days, I drop my children at school in Paris at 8.30am, and before noon I'm having coffee in London. This sort of experience is becoming quite normal in Europe. Bertolt Brecht, the German playwright, wrote during his 1930s exile (spent in Czechoslovakia, France, Denmark and Sweden) about "changing our country more often than our shoes". Nowadays some Europeans change their country faster than their socks, especially in the "Eurostar triangle" of London-Paris-Brussels. This connectivity is most common among the elite but is spreading wider. Western Europe today is surely the most interlinked region in global history. That explains why – contrary to popular opinion – it remains the most successful region on earth.

Western Europe always was connected. Because of what the British historian Norman Davies calls its "user-friendly climate" – mild and rainy – the land is fertile. That has allowed people speaking different languages to live more closely together here than anywhere else on the planet. That creates networks. European exploration has also been aided by another geographical asset: seas. Malise Ruthven, a scholar of Islam, notes that Europe has "a higher ratio of coast to landmass than any other continent or subcontinent".

Mobile Europeans have been exchanging ideas for centuries. The "scientific revolution" of the 16th and 17th centuries happened here because our scientists were near each other, debating with each other in their shared language: Latin. Copernicus, Polish son of a German merchant, wrote that the Earth circled the Sun. Galileo in Florence read Copernicus and confirmed his findings through a telescope. The Englishman Francis Bacon described their "scientific method": deductions based on data.

The proximity of so many nations also brought frequent wars. Eventually, in 1945, the continent was separated. After 1989, when I began crossing the Iron Curtain, I had a series of shocks: the people on the other side weren't exotic at all. Despite communism, they seemed distinctly European. I remember one eye-opening moment in Riga, Latvia, in 1992 soon after the country left the Soviet Union. I was renting an apartment on a courtyard. One evening, my landlady pointed out the neighbouring flat, which had belonged to the second secretary of Latvia's Communist party. She described the crowds breaking into it during the 1991 revolution. The story was unusual – and yet the scene was familiar. I knew brick apartment buildings just like this in Amsterdam and Berlin, albeit in better shape. My landlady, an ironic young woman who spoke passable English, was as recognisably European as my East German fellow students at university in West Berlin in 1990-1991. Europe had survived communism.

From the 1950s – and especially after 1989 – Europe converted its unique proximity from a threat into an opportunity. On January 1 1993, the EU legally became a single market. By 1996, Ryanair, EasyJet and the Eurostar were carrying people around Europe. From Frankfurt airport today, you can fly within three hours to dozens of countries, containing more than 500 million people. That is the world's densest network. For comparison: the only foreign capital you can reach from Tokyo within that time is Seoul, and from New York even Ottawa is further away.

Crossing European borders keeps getting easier. In 2006/07 a report for the European Commission found an estimated 780,000 cross-border commuters in western and central Europe. Today there are undoubtedly more. Some are Poles who have bought cheap houses in eastern Germany and travel to work in Poland. That was unimaginable in 1945, but one feature of post-1990 Europe is the fading of old national enmities; witness last month's first state visit by an Irish president to the UK or the BBC's international poll last year that identified Germany as "the most positively viewed nation in the world". The Greek newspaper that depicted Angela Merkel in Nazi get-up was a marginal voice.

Admittedly, one form of interconnection still barely exists in Europe: labour mobility. Of the EU's 506 million citizens, only 14 million (or 2.8 per cent) live in another EU state to their own. Very few southern Europeans have emigrated during the crisis. The number of Spaniards living abroad, for instance, rose by just 40,000 between January 2009 and January 2013, says Carmen González Enríquez of Spain's Real Instituto Elcano think-tank. That's fewer than 0.1 per cent of all Spaniards. And when Europeans do emigrate, they often go outside the EU. Ireland dispatches its many migrants chiefly within the Anglosphere: to the UK, US, Australia and Canada. Shared language still trumps shared European passports. Free movement of labour is a European reality only in London, Luxembourg and Brussels.

Rather, European mobility consists of countless daily exchanges, great and small. Europe today is a group of Germans descending on Maastricht to smoke pot in "coffee shops". It's Irish football fans in Dublin cheering on Arsenal and its German-Turkish playmaker Mesut Ozil. It's Britons visiting Tallinn for a stag weekend or Flemings Christmas-shopping in Paris. It's Danes living in relatively cheap southern Sweden and commuting to Copenhagen. English-language websites, Irish pubs and Mediterranean holidays have become pan-European staples.

These connections provide more than just pleasure (though pleasure matters). They also allow Europeans to learn from each other. That learning happens partly because European countries remain slightly different from each other. In the 1994 American film Pulp Fiction, John Travolta asks Samuel L. Jackson:

"You know what the funniest thing about Europe is?"

"Alright, well you can walk into a movie theatre in Amsterdam and buy a beer. And I don't mean in no paper cup. I'm talkin' about a glass of beer. And in Paris, you can buy a beer in McDonald's. You know what they call a Quarter Pounder with Cheese in Paris?"

Et cetera. Europe's "little differences" encourage cross-border learning. This happens first in everyday life: look at the steady improvement of London's nightlife, from something resembling Soviet-era Moscow 20 years ago, when police still banned most pavement tables as "fire hazards", to something more like Barcelona today. London changed because more Londoners began visiting the continent and saw better ways of doing things. The spread of free bicycles and gay marriage are other examples of intra-European learning.

But this learning happens in high politics too. When George W Bush wanted to invade Iraq, the UK articulated the "Yes" position, and the French and Germans attacked it. Europeans could choose between contrasting views, whereas the American political class mostly united in pro-invasion groupthink. On employment today, there's a debate between the free-market Brits, the Danes and Dutch with their flexible labour markets, and the southern Europeans, who protect jobs. Debates like that will eventually lead Europe to economic answers. Whatever Europe's formula will be, it won't be to copy China. Of course China is growing faster than Europe. It's easy to grow fast if you starve and impoverish your people, and then suddenly introduce a free market with imported technology, international trade and almost no environmental controls. That's catch-up. Europe is trying something harder: to achieve growth, and not just for the 1 per cent who are already well-off.

European countries also teach each other by setting each other political limits. Merkel, for instance, has chastised the Dutch far-right and helped oust Silvio Berlusconi as Italian prime minister. While Hungary threatens to abandon democracy, the European Commission labours to pull it back. Most inspiringly of all, as Kiev's "Euromaidan" protests showed, western Europe has become a beacon to less happy countries. The post-communist era could have gone horribly wrong. After 1989, eastern Europe's ex-communist countries could choose among various models to follow – including some nasty populist ones. Few of these countries had a democratic tradition. But those closest to the EU chose the European model. From 1995 to 2013, the world's fastest-growing middle-income economies were the Baltic states, Poland and Slovakia, says Marcin Piatkowski, the World Bank's senior economist in Warsaw. These countries grew faster even than South Korea, Singapore and Hong Kong. That was mostly because they looked at the EU, saw what they wanted to be and set about getting there fast. They copied European laws, and got billions in EU funds after joining the union in 2004. Now Europe can inspire Ukraine, Tunisia and Turkey after Erdogan.

This kind of cross-border learning helps Europe sidestep the apocalypses constantly foreseen by foreign observers. A decade ago, for instance, some Americans were predicting a European plunge back into fascism. In 2004, the US ambassador to the EU, Rockwell Schnabel, said European anti-Semitism was "getting to the point where it is as bad as it was in the 1930s". Now that even most European far-right parties have binned anti-Semitism, Schnabel himself must realise that's ludicrous. The American neocon dystopia of "Eurabia" – a Europe ruled by a vast fundamentalist Muslim population – hasn't come true either.

Nor will the current apocalypse narrative of a Europe led by far-right parties. This will be trotted out again after this week's European elections, when thugs wearing suits celebrate before the TV cameras. But, in fact, it's remarkable how little headway these people have made, after nearly six years of Europe's worst postwar economic crisis. Even most of their voters regard the populists as protest parties without answers. Because the European parliament is boring and lacks power, many Europeans treat Euro elections as a safe place to teach mainstream politicians a lesson. The populist UK Independence party, for instance, tipped to triumph in this week's election, has precisely zero seats in Westminster. As the research and advisory group Counterpoint notes, Europe's far-right parties haven't risen en masse during the crisis. Some have gained votes; others have declined. (And even these parties have pan-European networks; witness the "pact" between France's Marine Le Pen and the Netherlands' Geert Wilders or the bizarre communal pilgrimage by several European far-right leaders to Israel's Yad Vashem Holocaust memorial in 2010.)

Foreign observers need apocalypse narratives to make Europe's tame politics interesting. But most Europeans have been vaccinated against utopianism by their continent's past. They don't believe that armies goose-stepping to the national anthem will usher in Valhalla. Anyway, most Europeans – excluding young people in Mediterranean countries – still enjoy the safest, fairest and most comfortable daily life on earth. A few statistics:

• Most countries where people can expect to live to 82 or longer are European, according to the World Health Organisation.

• On the UN's human development index, Estonia, Slovakia and even Greece still outrank Qatar, despite its wealth.

• Most "emerging economies" lag Europe by decades. Greek income per capita is double Brazil's, more than three times China's and 15 times India's, according to the World Bank.

• Europe accounts for seven of the top nine countries on the World Economic Forum's gender gap index, six of the top eight in Transparency International's corruption perception index and the 17 countries with most income equality, according to the US Central Intelligence Agency's ranking. In short, Europe still spreads its gains pretty well.

All this adds up to a European dream: dozens of nations living together in harmony and freedom, with unmatched exchanges across borders and with the world's highest quality of life if not highest incomes.

The European dream appears quite stable. China may be heading for a bump in the road if its population ever demands democracy. Russia had a period of fast growth (with precious little benefit for most Russians) but what happens if Vladimir Putin is becoming a military adventurer? Europe looks to have those traumas behind it. Nor has it become an American-style plutocracy.

Europe still has lots to learn. A French friend recently attended a Californian reception packed with brilliant French engineers working in Silicon Valley. He came home thinking: "What would it take to bring those people back to France?" That's the sort of question Europeans need to ask: how to convert their wonderful idea networks into Apples and Googles? London, Europe's de facto business capital, with its budding tech sector, may be finding an answer. If it does, the rest of the continent will try to copy it, because nonstop cross-border learning is still the secret of Europe's success.

Simon Kuper writes a weekly column for FT Weekend Magazine. He is based in Paris