The oldest human to have ever lived died at the age of 122—and that was nearly 20 years ago. A recent analysis of global demographic data suggests this may very well be the maximum age attainable by humans, and that it's extremely unlikely anyone will ever live much beyond this advanced age. That is, unless we science the shit out of this problem.

In a new study published in Nature, molecular geneticist Jan Vijg and his team from the Albert Einstein College of Medicine in the Bronx make the case that human lifespan has a natural limit, and that we'll probably never exceed this maximum bound. It's a surprising conclusion given the tremendous medical achievements we've made in the past 100 years, and the steady rise in life expectancy. But as this study points out, the benefits wrought by these interventions, and all the things we do to stay vibrant and healthy, only go so far. Our bodies, no matter what we do, eventually become worn out and expire. 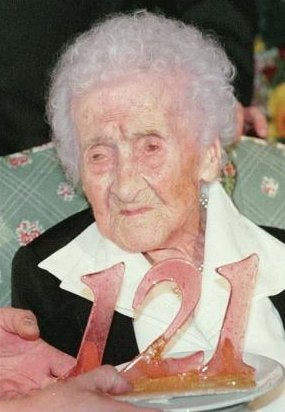 Jeanne Calment (1875-1997) celebrating her 121st birthday. She managed to live long enough to experience another. She's the oldest human to have ever lived.

No one has lived longer than Jeanne Calment, who died in 1997 at the age of 122 years and 164 days. Given the increasing number of people breaching the 100 year barrier, and considering the steady increases in life expectancy, scientists thought that her longevity record would be broken relatively quickly. This simply hasn't happened. There's a big difference, it would appear, between life expectancy—the average time a person is expected to live within a certain population—and lifespan, which describes the maximum age reached by a member of a particular species.

Vijg and his colleagues took a look at the Human Mortality Database, a publicly available research tool that provides global mortality and population statistics to researchers, students, and others interested in human longevity. The researchers discovered that jumps in survival rates reached a plateau around 1980. A follow-up analysis of data from the International Database on Longevity, which included demographic statistics from developed nations like the US, UK, France, and Japan, showed that the longest lived people haven't been getting any older since the time of Calment's death in 1997. Taken together, the researchers say this reveals a natural limit to longevity.

"We will need to discover something fundamentally different that allows us to slow the biological process of aging in order to break through this barrier. I'm optimistic this will happen in our lifetime."

Models developed by the researchers show that the odds of anyone living much beyond this limit is slim. "Assuming there are 10,000 worlds like ours, then one individual will reach 125 years of age in a given year," Vijg explained to Gizmodo. "The chance is 1 in 10,000, so it's extremely remote."

Sociologist and gerontologist S. Jay Olshansky from the University of Chicago agrees with these findings, saying many people are under the false belief that we can forever manufacture more survival time through medical technology.

"These researchers suggest that we will get diminishing returns from these efforts because we're butting up against a limit," Olshansky told Gizmodo. "Having said that, it doesn't mean that further progress isn't possible. To the contrary, there is still plenty of low hanging fruit available to extend life—this comes from reducing harmful behavioral risk factors such as smoking and obesity, and reducing disparities." He cautions, however, that even these interventions won't yield large gains in life expectancy.

Olshansky isn't surprised by these findings, saying it's something he and his colleagues predicted way back in 1990. But he does take issue with the concept of a "natural limit" to human lifespan. Vijg and his colleagues say this apparent limit is a fixed genetic trait that evolved under the direct force of natural selection, and that limited lifespans may be an evolutionary adaptation.

Since the time of Darwin, evolutionary biologists have wondered why the lifespans of different...

This controversial idea, called "programmed aging," suggests that lifespans are genetically conditioned, and not wholly the result of gradual wear-and-tear. Take birds, for example. Some species live for two or three years, while others, like the albatross, can live for up to 50 years. The difference has to do with the way the lifespans of certain species are genetically controlled.

Writing in a Nature News and Views article, Olshansky says this is simply not possible:

Fixed genetic programs that directly cause ageing and death cannot exist as a direct product of evolution, because the end result would be death at an age beyond which almost every member of a species would ordinarily live. A genetic time bomb designed to kill us at older ages is equivalent to automobile manufacturers building in an explosive device that is set off only when a car reaches one million miles. Because most cars are never driven that far, such a device would be useless.

Olshansky believes that the "natural limit" can be breached, but probably not by any technology we have available today, and probably not even by curing major fatal diseases. "We will need to discover something fundamentally different that allows us to slow the biological process of aging in order to break through this barrier," he told Gizmodo. "I'm optimistic this will happen in our lifetime."

Another person who's optimistic about extending human lifespans is biogerontologist Aubrey de Grey, the Chief Science Officer of the SENS Research Foundation, an organization dedicated to extending healthy human lifespan.

Responding to the question of how life extending interventions might alter this apparent limit, de Grey said, "They will obliterate it," adding that the "limit exists because of the simple mathematical combination of three things, all related to the fact that aging is the accumulation of self-inflicted damage."

The three things in question include the degree of damage inflicted onto the body when early life factors such as not smoking and good nutrition are in place, how rapidly the damage increases thereafter, and how much damage the body can withstand without ceasing to function. Modern medicine shows little prospect of being able to change these realities, de Grey says—the more damaged the body, the less it is capable of preventing more damage.

"But new medicine that we will have within the coming decades, and which SENS Research Foundation is racing to develop, will break that feedback loop entirely," he told Gizmodo. "It will repair the damage, using various types of regenerative medicine, so that the ongoing creation of damage will no longer lead to the accelerated accumulation of that damage and the downstream pathologies that it causes." 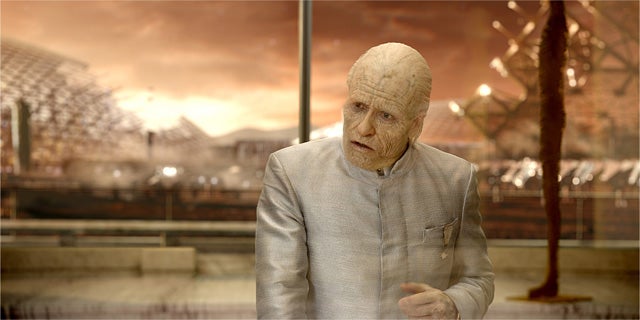 Biologists have successfully extended the life spans of some mice by as much as 70%, leading many...

The damage-repair therapies that de Grey is hoping to develop, plus all the other unknown medical interventions that await in the future, threaten to upset Vijg's assumption about an upper limit to human lifespan. Future developments could include a dramatic reworking of human genetics using genome editing tools like CRISPR, and the introduction of artificial chromosomes to give us new ways of staving off age related diseases. Advances in molecular nanotechnology, cybernetics, and regenerative medicine could alter human biology even further.

But to be fair, this new Nature study is a normative analysis that assumes a kind of status quo as it pertains to the state of medical technologies. If de Grey and other proponents of radical life extension are correct, however, there's no limit to how long future humans could live. He predicts that humans will eventually reach a stage of "negligible senescence," that is, a state in which aging is so slow that it's imperceptible.

On this point, Olshanksy pumps the brakes.

"Contrary to the futurists claiming that radical life extension or immortality is at hand—a claim that has been made for most of the last two thousand years from alchemists to modern day anti-aging charlatans—it's not likely we're going to live much longer than the longest lived among us," he said.

Olshansky says it's important to keep our eye on the prize, which is to extend healthy life. Should we succeed, the resulting increases to our longevity will be a bonus, but only if the added survival time is healthy.

"We do need to recognize that there are limits, but this should in no way stop us from developing new ways to manufacture more healthy life," he says. "Given that healthy life is one of the most precious commodities on earth, it's hard to imagine that we'll stop trying—and no one is suggesting that."

And indeed, the authors of the new study say their research is highlighting the need for scientists to develop "interventions beyond improving health span," adding that "there is no scientific reason why such efforts could not be successful."