, but the devices we use on a daily basis? They don't necessarily make things easier. In fact, the bricks that come with many modern devices, from your router to

to your game console, tend to be giant, and at first, they were designed without any consideration for the fact that there was ample competition for your limited outlet space. Why have AC adapters traditionally been so frustrating? Today's Tedium explains.

The year that the power strip was invented. It's not an American invention, but an Australian one. The idea was formulated by Kambrook founder Frank Bannigan and his understudy, Peter Talbot. (The initial design looks closer to a boombox than the array of outlets we're used to.) Despite inventing something that soon became a part of households all over the world, Kambrook never patented the device. "I've probably lost millions of dollars In royalties alone," Brannigan said of the oversight back in 2000. "Whenever I go into a department store and see a wide range of power boards on offer, it comes back to haunt me." 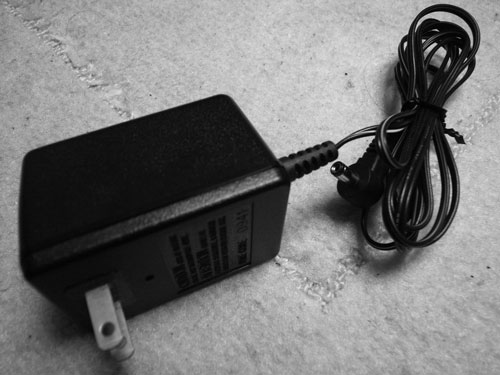 Why "wall warts" put their pockmarks on good outlets everywhere

What's the difference between a cheap product and one that's been heavily designed?

In some cases, it may be the wall wart, or the power adapter that transforms energy while directly attached to an outlet.

Here's why they exist: Most modern electricity systems rely on alternating current, or the type of energy Nikola Tesla made his name on in the late 19th century, besting Thomas Edison in a well-remembered feud over how Americans should power their lightbulbs.

However, most of our electronic devices internally use direct current, which is more efficient for low-power devices and offers a constant voltage level. If the current alternated on a circuit board, it would be far less effective at delivering messages from the CPU to your screen, just as an example.

The AC adapter is effectively the bridge between how your devices actually use energy and how the power system delivers that power. The transformer baked inside turns the high voltage in the grid's power stream into something manageable for your Casiotone.

Now, you might be wondering to yourself, why isn't this functionality included directly in our devices? Why can I plug in a TV without an extra adapter, but my router needs a wall wart? Simply, it comes down to a few things, including the cost of the device, the efficiency of the design, and what's most likely to break. An AC adapter removes a point of failure from the product itself.

But these devices come with a lot of complications. The biggest, perhaps, is the fact that the bricks aren't horribly efficient at their jobs, which is why they tend to overheat. But the other problem is their size—the earliest designers of AC adapters were attempting to solve an engineering problem, essentially, without much thought to how the design of the brick would interact with every other device that needs to be plugged in.

Another problem is that various devices each tend to have different voltage needs, which means that many of these adaptors aren't compatible with one another.

Some of this is understandable—different products require different types of voltages, and that might make a closed loop desirable for some designers—but it creates a lot of waste.

As a result of these problems, AC adapters generate a lot of hate in some circles.

"AC-plug power supplies are a cheap workaround to various engineering, economic, and regulatory problems that manufacturers face, and they solve those problems by pushing them off onto end users," wrote OS News contributor David Adams.

It's a bad design that sets a bad precedent, but it likely stuck around because, when it comes down to it, it's cheap and solves a problem.

And that solution lets electronics manufacturers focus on the parts of the products they can do justice.

"Accessory manufacturers have accorded serious thought to the problem of converting battery operated sets over to A.C. operation and solved it by the development of an A.C. adaptor harness whereby practically any standard five or six tube D.C. filament radio receiver can be converted into an A.C. filament operated installation, without molesting any of the wiring within the receiver cabinet."

— An article in the February 1928 edition of Radio Engineering, offering one of the earliest mentions of an AC adapter designed to convert DC power to AC power—for the purposes of allowing a battery-operated radio to operate on the power grid. The device, advertised by the H.H. Eby Manufacturing Company in the previous month's issue of the same magazine, was intended specifically to allow AC-based vacuum tubes to be used in DC-based radios. 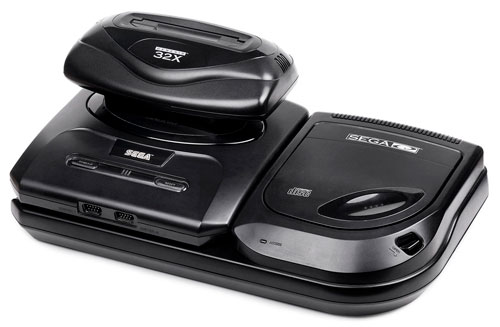 How Sega created an outlet conundrum for its biggest fans

If you owned a Sega Genesis back in the mid-'90s, you were most likely aware of the fact that, unlike for your friends that owned Super NESes, you had an upgrade path.

And it wasn't just limited to a Game Genie, either. Sega was more willing than its competitors to release add-ons for its system that expanded what could be done with it. Most notably, there was the Sega CD, but additionally, the company also released the 32X, a stopgap solution that made the Genesis into a 32-bit machine, at the end of 1994.

This was a problem for the average power strip. Power strips at the time were designed to be very narrow and with their adapters each aligned vertically. If you have a single device with an AC adapter on a power strip, this isn't a problem, because it can be attached to the end of the strip. But if you have three, you suddenly have a traffic problem. Simply put, you can't plug in a TV and three AC adapters on a single power strip. You'll be lucky to even fit the three power adapters. 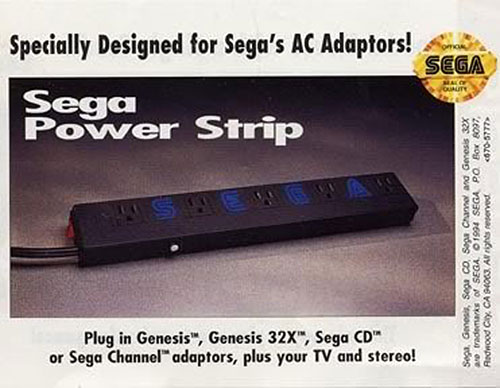 Sega immediately realized the problem it created for gamers who really wanted to play Fahrenheit. Its response? With the release of the 32X, it also started selling an officially-branded power strip, one that flipped the outlets so the AC adapters could be plugged in side-by-side.

The 32X was a historic flop for Sega, one that was pushed off the market within about a year and a half of release (the timing of the add-on was particularly bad, because the firm had already announced its forthcoming Saturn console), but since then, Sega enthusiasts have figured out a few interesting tricks to solve this unusual state of affairs. In 2013, one enterprising gamer discovered that, if he used an aftermarket video cable with an additional pin attached, he could effectively run a 32X and Genesis on a single AC adapter. (You have to wonder what sort of technical reason/fire hazard was at play that led Sega to not do that in the first place.)

And some folks, such as this British user, have taken to retrofitting laptop chargers to replace the AC adapters.

Perhaps the most interesting, however, is a homebrew product specifically targeted at Genesis die-hards. For the past few years, a firm called Retro Game Cave has been selling a device called the Sega Trio—an AC adapter with three plugs, allowing you to plug in all three devices at once. The adapter, by the way, is far smaller than Sega's own power adapter, and reportedly generates less heat. But since it's just one tiny firm producing them, the adapters frequently sell out, likely thanks to fawning YouTube reviews like this one.

(The firm also sells an adapter that can power an NES and Super NES on a single device.)

"One of the ways that our Nation wastes energy is through what they call vampire devices. These would be battery chargers, cell phone chargers, computer systems that we—we really think we're not using energy when plugged in but, in fact, are."

— Former President George W. Bush, in a 2001 executive order that requires the federal government to use devices that require low wattage when idling—while simultaneously associating electronic devices with vampires. AC adapters are generally seen as notable examples of this problem, as they tend to draw power even when not in use. And often, people will leave the adapters plugged into the outlets even when they're not plugged into anything else. "It's as if you decided to pour yourself some orange juice, filled up the glass, and then just left the jug lying on its side, the top off, contents spilling everywhere," suggested Grist's mononymic advice columnist, Umbra. "Why, people, why?"

These days, you're much less likely to run into a Sega adapter situation. After the Genesis, the company started including power adapters in its consoles, which nonetheless failed to win over the market. (Sony followed suit with this design strategy; even modern Playstation consoles have integrated power supplies.)

We haven't gotten rid of power bricks overall—see the Xbox One's ginormous block—but game manufacturers have at least designed them in a way that they no longer get in the way of actually plugging them into a power strip.

And, outside of the world of video games, cheap electronics are all over the place with their AC adapters, meaning that odds are good that we may never be rid of them. I see three solutions to this problem:

Make AC adapters universal in design. Back in 2012, the United Nations attempted to create a universal power adapter standard that would be pushed on just the kinds of devices that use AC adapters—like cordless telephones and set-top boxes. If we can make AC adapters easy to plug in to a couple hundred devices, we might just save people some money on adapters.

Make more stuff USB-compatible. USB has the potential to do more than solve the global power-outlet problem. For lower-power devices, it can make power outlets a thing in the past. Its success as a phone-charging platform, partly driven by the UN a few years back, also helps sell the UN's case for universal AC adapters.

Switch the grid to direct current someday. In recent years, there's been chatter in the energy world about moving toward a DC power-based grid, a move that sounds a bit pie-in-the-sky, but nonetheless has some momentum, thanks to a group called the eMerge Alliance that's been making the case that it could be more efficient. Additionally, certain users, like data centers, might find going all-DC worth their time.

That last idea might sound a bit crazy, but if you own a car, you likely already use DC power outlets on the regular. They're called "cigarette lighter receptacles," and they offer up to 12 volts of energy to your devices.

And they have converters to AC power, too. They certainly can't be any worse than what Sega did to our power strips back in the day.