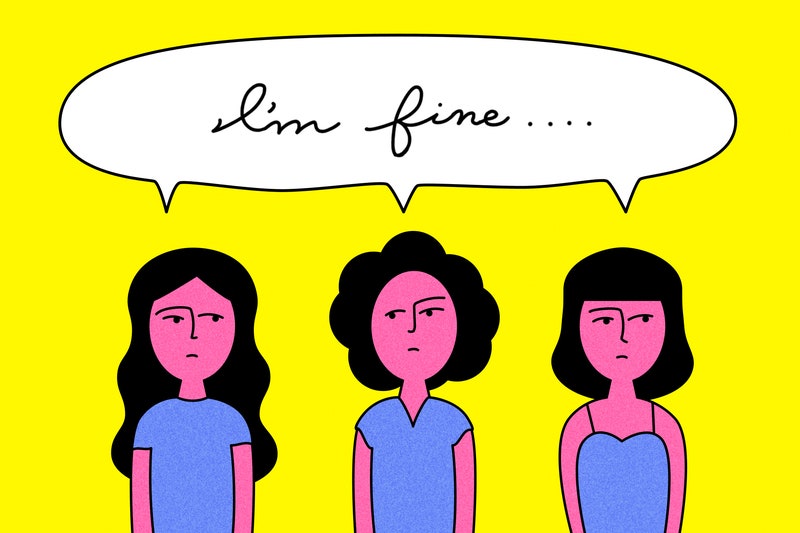 Why can't women pick a restaurant? Why do women need throw pillows? Why do women go to the bathroom in groups? What's an eyelash curler? Men have a lot of questions about women. Some of these questions are unanswerable—I have no idea why throw pillows make beds look so much nicer, but they do, so we buy them—but I can help you out with one really common one: why do women say nothing is wrong when something is wrong?

Men have been asking this question for a long time. I would say "for decades," but I'm pretty sure there were large swaths of history when a woman might tell a man she was fine, and despite heaps of evidence to the contrary he would just accept her answer and return to his cigar, untroubled. So, for the modern man, here's why a woman might say "I'm fine" when she's clearly not.

Crazy. Psycho. Bitch. All of those things get thrown at women—sometimes all at the same time. Most women have, at one time or another, been slapped with those labels just for voicing totally normal and healthy concerns and boundaries. Your girlfriend isn't crazy for asking why you have sleepovers at your best female friend's house, which you then "forget" to tell her about. And she isn't a bitch for asking that you spend at least some of the time you're together not staring at your phone. (Don't get me started on guys who label their exes "psychos.") Women are constantly told that we're overreacting. Media images of crazy girlfriends are pervasive, and it's been drilled into women that we should try to be the Chill Girl who drinks lots of beers and never brings up any of her problems. As a woman, you get good at shrinking down your emotional needs and expectations, just to make sure you don't come across as "crazy." Is this depressing? Yes. But it's also why, sometimes, when you ask a woman what's wrong, she might keep her mouth shut lest she get labeled "high maintenance."

She hasn't worked it out yet.

On a less bleak note, a woman might also say that nothing's wrong because she hasn't yet worked out what is wrong. Women are, generally speaking, pretty adroit with nuanced emotions, but being capable of deep introspection also means there can be a lot to unpack, and—for reasons stated above—we want to make sure we bring up problems in a healthy, constructive way that doesn't seem like we're throwing the kitchen sink at you. It can feel very Eminem's "Lose Yourself" to bring up a relationship problem with a man: you only get one shot. (If you bring it up a lot, you're nagging.) Sometimes I simply don't know yet why I've been feeling hurt, and I'm trying to figure out if it's just a me problem.

She just doesn't have the energy.

This one is a classic. A big part of being in a mature relationship is learning that, yes, you need to bring up problems when they arise. But you also learn that some problems just go away on their own. So, when a woman says she's fine, she might just be hoping this is one of those problems that solves itself. Maybe the problem is only salient in this particular moment, and isn't recurring, i.e. she's upset that you didn't plan well enough to come over to her parents' anniversary dinner. Or maybe it's short-term: while you're looking to buy a new car, you both have to share one, and she fills up the tank twice in a row. Or maybe it's simply a battle she doesn't want to fight. Either way, she might have decided that it's simply not worth the energy it takes to sit down and have a discussion about what she feels when you leave clothes next to, rather than inside of, the hamper. You needling her to tell you what's wrong is only going to require more energy from her, not less. So let it go for now, but also consider whether there's anything you could be doing to make life a bit easier for her, and then do it. She should be (and likely is) doing the same thing for you.

She's already addressed the problem with you.

Maybe she's asked you 40 times before not to leave your rec league hockey equipment in the back of the car where it smells disgusting. Or she's asked you to help with the thank-you cards from your kid's birthday party three times. At some point, reiterating how she feels about these things isn't just frustrating, it's a total waste of time. At this point she gives up on you, does the thank-you notes herself, and moves on. Do not let a grievance reach this point.

You're bad at listening.

Men love solving problems. It's a quality that I appreciate when I'm having trouble packing the trunk for my road trip to Tucson, but which I resent when I'm trying to emote. If you get bored or distracted easily when your girlfriend brings up her work problems, or if you default to forcing advice on her, she's going to stop bringing things up to you. She's going to say things are "fine."

If I had a dollar for every time a guy was convinced that I was upset when I really, really wasn't, I would have a first class round trip flight to Buenos Aires already booked. It's great when a man keeps checking in when I say nothing is wrong. It shows me that he does care if I have a problem and isn't just asking to make sure I'm not "mad" at him. But if your partner tells you that nothing is wrong—even if you think something is—ask just one more time, and if she still says nothing is wrong, take her at her word. A simple "Are you sure there's nothing that you want to talk about?" is nice, especially if you stop what you're doing and make it clear you are actually open to talking about an issue, if there is one.